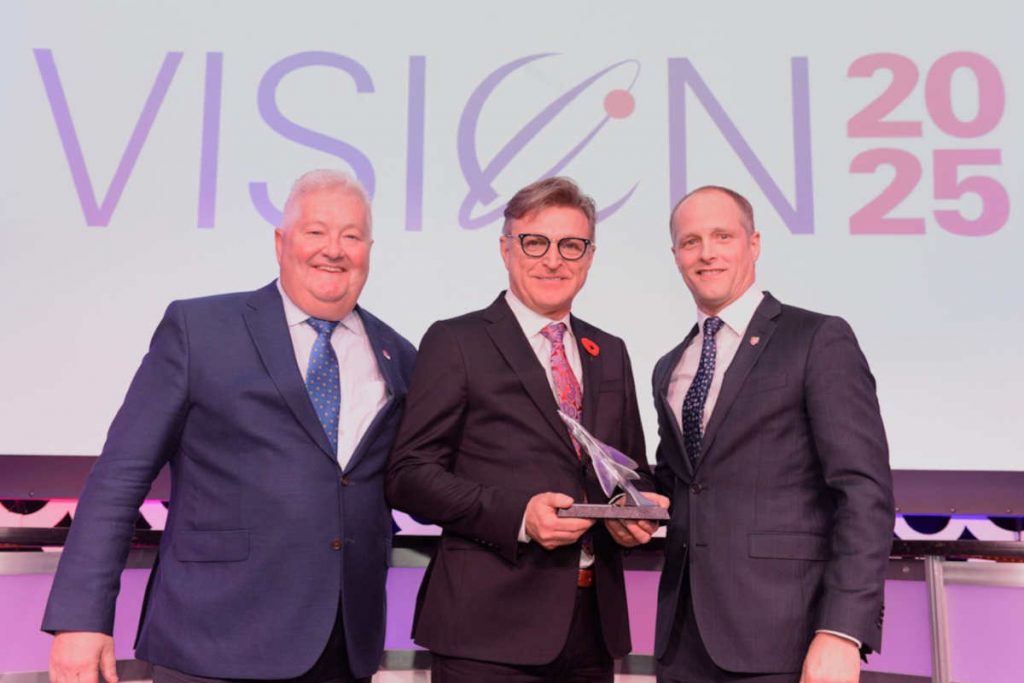 Aerospace Industries Association of Canada, on November 12 during its Canadian Aerospace Summit in Ottawa, ON, presented its three annual awards to Marc Parent, president and CEO of CAE; John Saabas, who recently retired from Pratt & Whitney Canada; and Avior Integrated Products.

Parent received the James C. Floyd Award, named after the chief designer of the Avro Arrow to recognize the achievements of visionary individuals or teams within the Canadian aerospace industry. In describing the rationale for presenting him with the award, Aerospace Industries Association of Canada (AIAC) explains CAE, under Parent’s leadership since 2009, went from a company that was heavily in debt and trailing its competitors to one that is now seen as the foremost provider of aviation and healthcare training services in the world.

“It is with a lot of pride that I accept this award. It is a testament to the perseverance and dedication of CAE’s 10,000 highly talented employees worldwide. They are each equally deserving of this recognition,” said Parent. “For the past decade, I have enjoyed the privilege of leading a team of men and women with one singular focus: to deliver excellence in training.”

CAE now has customers in 190 countries, with 160 sites and training locations in more than 35 countries. Each year, the company trains more than 220,000 civil and defense crewmembers, including more than 135,000 pilots, and thousands of healthcare professionals worldwide.

John Saabas received AIAC’s Industry Excellence Award for Lifetime Achievement. Holding a PhD in Aerodynamics from McGill University, Saabas spent 35 years at Pratt & Whitney Canada, including the last 10 years as president, until retiring from the company in early 2019. AIAC notes his legacies of innovation, sustainability, and collaboration have had a profound impact on Canada’s aerospace industry.

Under his leadership, AIAC explains Pratt & Whitney Canada achieved a leadership position in all markets, with a portfolio of more than 64,000 engines in service and 13,000 customers worldwide. The company certified more than 100 engines during a 25-year period, while also developing operations in China, Poland, the Mirabel Aerospace Centre, and the Advanced Manufacturing Cells.

AIAC notes, that in the last two years, Avior commissioned its first robotic machining centre, with another to follow shortly; launched its own Business Intelligence software system; converted two of its three business units into paperless production environments; and more recently, installed a collaborative robot to assist with certain shop-floor operations. Avior has grown by 35 per cent in 2019, according to AIAC, and is forecasting 20 per cent growth in 2020.