The DHC-3 Otter, is having a resurgence as its value continues to increase. 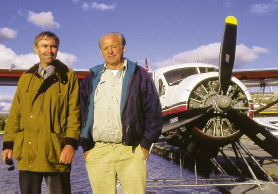 De Havilland Canada's half-century-old workhorse, the DHC-3 Otter,
is having a resurgence as its value continues to increase – to the
point that two Canadians travelled to Peru to pluck one of the big
single-engine aircraft out of the jungle and repatriate it to Canada,
rebuild it to likenew condition and put it on the market.

For years there had been talk of an Otter sitting in the jungle but
in reasonable condition. It had been sitting in Peru since 1992, but
considering its remote location and the brutal civil war being waged in
that country, no one was daft enough to go after it. But it wasn't just
any Otter; it had been converted from the Polish 600-hp PZL radial
engine to the big PZL ASZ-621RM18 1,000-hp engine, which had only eight
hours on it before the aircraft had its wings clipped.This piqued the
interest of Frank Kubisewsky (‘Kuby'), owner and president of Kenora
Air Service, and Kenora businessman and partner Don Canfield, who
discovered through sources that it was for sale. That it had only
11,000 hours TT further fueled their interest. But if they wanted it
they would have to head for the small town of Satipo – only 280
straight-line kilometres east of Lima but on the other side of the
Andes and isolated in the jungle. The only way to get there was over
the mountains, and the only way to get the plane back was to dismantle
it and ship it by container.

Kuby and Canfield were warned not to go; it was too dangerous. But
knowing that there was a perfectly good, low-time Otter sitting in the
jungle drove the two toward their decision. They had reason to believe
that the Otter was in good condition; it was owned by the Wings of Hope
non-profit charitable organization, which operates a fleet of close to
130 aircraft around the world. A few faxed pictures of the Otter
sitting under cover in Satipo helped kick-start two months of planning
for the aircraft's retrieval. "After speaking to retired Wings of Hope
representative Claude Gaunier in Ottawa we had a good comfort level
with the people we were dealing with in Peru,which made us feel a
little more easy about the excursion that we were about to embark on,"
Canfield said. "We planned our trip very tight – one week to get to the
aircraft, dismantle it, pack it on flatbeds and ship it to Lima where
it would be put into a container and shipped back to Canada.We could
have flown it out, but we were told that we could risk being shot down
by the guerrillas or the Peruvian Air Force!"