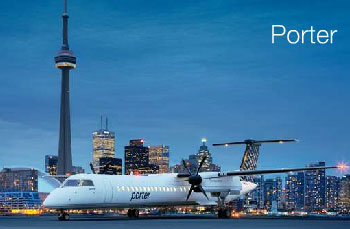 Flights between Toronto City Centre Airport (TCCA) and Montreal will double by May 6, to as many as 18 roundtrips each weekday from the current level of nine. An initial increase to 14 daily roundtrips takes place April 14. On the TCCA-Ottawa route, the number of roundtrips increases to 14 from 10 on April 30. Weekend service is also increasing on both routes.

“With peak-time flights regularly operating at capacity on our busiest routes, the added flights are necessary for meeting the obvious passenger demand,” said Robert Deluce, president and CEO of Porter Airlines. “We’re giving Porter customers what they’ve asked for with more flights at times that matter to them on these crucial routes.”

The Porter experience is redefining short-haul air travel with a commitment to speed, convenience and service that is becoming widely known among travelers. All Porter passengers have access to a private area in the terminal with leather lounge seating, snacks, beverages, WiFi and computer workstations, all at no additional cost. The onboard offering continues to provide complimentary premium snacks, wine, beer and extra legroom. Its TCCA base is one of the most convenient urban airports in the world, just minutes from downtown. Its location saves passengers up to two hours or more on roundtrip travel.

“The combination of a full-service product providing unbeatable value is something all travelers appreciate, particularly today,” said Deluce. “Now is the time to invest and take advantage of the goodwill Porter is creating in the market by improving our product and strengthening the foundation for future growth.”