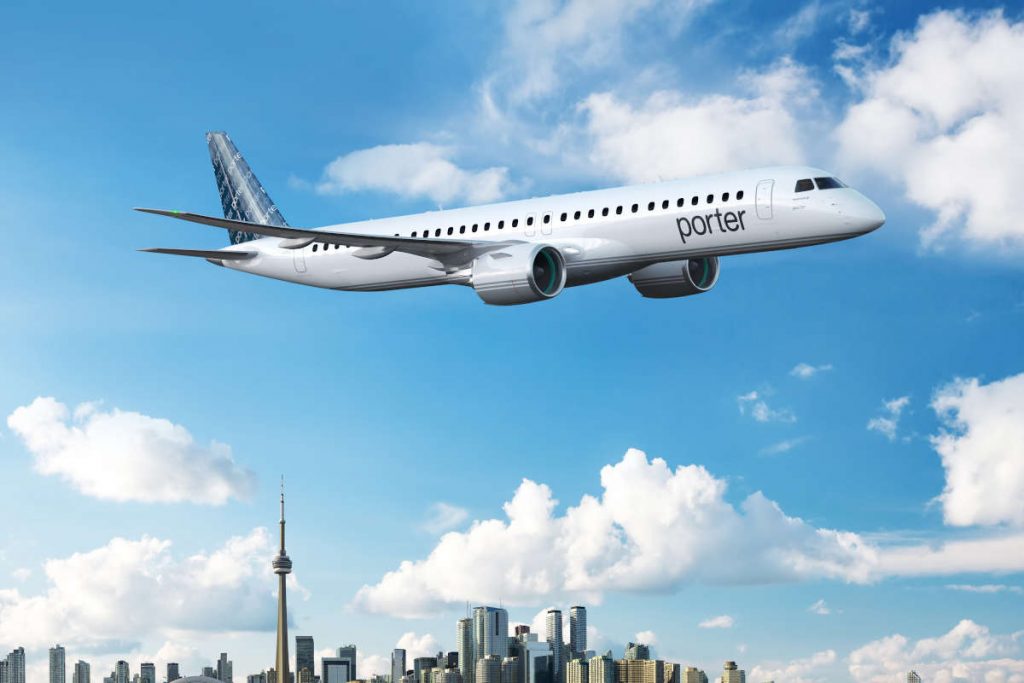 TORONTO — Porter Airlines could shake up the Canadian airline industry after announcing plans to launch jet service to destinations in Canada, the U.S. and the Caribbean with an order for up to 80 aircraft with a list price of US$5.8 billion.

The regional airline says it has signed a deal to become the North American launch customer for the Embraer E195-E2 jet aircraft and plans to offer flights from Toronto Pearson International Airport along with Ottawa, Montreal and Halifax.

Porter has placed a firm order for 30 planes and 50 purchase right options, and likely received a hefty discount from the list price. It also has the option to convert purchase rights to the E190-E2s.

The new aircraft will not operate from Toronto’s Billy Bishop Airport on the city’s waterfront where Porter currently offers service on turboprop aircraft.

Its entire fleet of 29 Q400 planes has been grounded for more than a year because of the pandemic and isn’t scheduled to resume flying until Sept. 8.

Porter will restart operations in phases, with the initial flights between Canadian destinations. Flights to U.S. cities including Boston, Chicago, New York and Washington D.C. will resume Sept. 17.

“Obviously the last 16 months has been a difficult time for the industry, but out of crisis is often the best opportunity for establishing growth in the future,” CEO Michael Duluce said in an interview.

He said the pandemic laid the foundation for the substantial growth plan it will enact midway through 2022 as it enters the recovery phase from the pandemic.

A full list of destinations will be announced in due course, but Deluce sees opportunities to service the southern U.S. as well as the Caribbean and Mexico.

Airline analyst Robert Kokonis, president of airline consulting firm AirTrav Inc., called it a “bold move” that will surely illicit a strong response from Canada’s two largest airlines especially as it prepares to land “in the jaws of the dragon at Pearson, which is Air Canada’s main base of operations and the second-largest base for WestJet Airlines.

“WestJet and Air Canada are not going to take this sitting down. They’re going to put a very robust response on the marketplace because everybody’s suffered through the pandemic,” he said in an interview.

That’s good news for passengers who have seen their options expand with the addition of Swoop, Flair and upcoming addition of Enerjet.

But Kokonis doesn’t believe Porter will try to become Sunwing, Transat or Air Canada Rouge by appealing mainly to the leisure crowd. Instead, he expects it will continue to cater to business travellers who have taken advantage of the Toronto island airport’s quick access to the country’s largest city, in addition to leisure travellers.

Porter’s growth has always been limited by available slots at the island airport. Its effort to add jet service was quashed in 2015 when jets were barred.

The airline placed a conditional order in 2013 for Bombardier CSeries planes, now known as Airbus A220. It let that order lapse within the past year and switched to Embraer’s latest product after reviewing its expansion plans.

Kokonis said the Embraer plane with 120 to 146 seats is a great option for Porter, which has an extremely strong brand presence and customer base in Eastern Canada.

“It’s a very, very bold and decisive market action they’re taking and again because this carrier has been grounded more than any other carrier in Canada through the pandemic I couldn’t wish that upon a longer suffering group of people and employees, executives and shareholders than this group too,” he said.

“And I think they might just have a fighting chance to make it all work.”

Deluce said Porter is prepared for whatever reaction the competition might have.

“Porter has the highest customer satisfaction in Canada and a really well-regarded product. And we revolutionized and changed the way people short-haul travel and now with E2 expansion, we’ll be able to broaden our route network across North America and really do the same with longer haul flying than we’ve done in the short-haul market.”