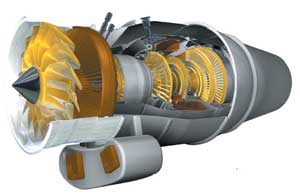 IN 1958, PRATT & WHITNEY Canada (P&WC) was given the go-ahead
by its US parent to develop and manufacture the PT6. Seen at the time
as recompense by the American operation for taking control of the
Canadian-designed JT12 turbojet one year earlier, it was to become a
defining point in P&WC’s history.

The
ubiquitous PT6 is still going strong nearly 40 years later, helped in
no small measure as a turboprop by the success of the de Havilland Twin
Otter (more than 800 built), and as a turboshaft for helicopters in
both single-engined applications and in Twin-Pac form.

PW&C
planted 75 candles on this year’s birthday cake. Founded in 1928 to
perform sales and service for the popular R-1340 Wasp radial piston
engine built by Pratt & Whitney of East Hartford, Connecticut, the
Canadian operation has grown into one of the world’s leading developers
of turboprop engines, as well as turbofans up to 20,000 pounds of
thrust.

This year, P&WC appears to be firing on all
cylinders. At NBAA 2003 in Orlando, president Alain Bellemare announced
that long-time customer Cessna has selected the PW545B engine to power
its new Citation XLS, an enhanced version of the popular Excel. Two
other versions of the 500 family – the PW503A and PW535A – already
power the Citation Bravo and Ultra Encore business jets respectively.

Earlier
this year, the selection of PW600 series turbofan engines – first
launched at the 2001 NBAA convention – for both the Cessna Mustang and
Eclipse 500, put the company in a commanding position in the growing
small-businessjet market. The company is also cautiously optimistic
over a rebound in the turboprop regional market, especially with the
Bombardier Q400, powered by the PW150A.