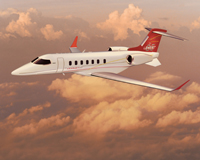 At 6,100 pounds of take-off thrust, the PW307B engine incorporates a suite of advanced technologies, including a TALON(TM) low-emissions combustor, an advanced shock-management fan for increased flow capacity, and powdered-metal, high-pressure turbine disks for improved efficiency. The result is superior performance, better fuel consumption and improved operating economics, together with Pratt & Whitney Canada's trademark dependability. "Our companies have worked together for many years on the Learjet 60 aircraft platform, which features the most fuel efficient engine among current production midsize jets," said David Coleal, vice-president and general manager, Learjet. "Our new alliance builds on this success to offer an aircraft and powerplant solution that will deliver exceptional value for operators, featuring superior performance combined with reduced emission levels and low noise."

Pratt & Whitney Canada's PW307B turbofan engine offers the least environmental impact of any engine in its class with a reduction in nitrous oxide emissions that betters International Civil Aviation Organization standards by over 30 per cent. The PW307B also meets Zurich 5 emission requirements for no landing fee surcharges.

"We are very pleased to join Bombardier as the engine supplier of choice in the Learjet 85 program," said Claude Lachapelle, vice-president, Business Aviation, Pratt & Whitney Canada. "The new-generation PW307 is the perfect engine for the midsize jet market, and we believe the combined strengths of the Learjet 85 and PW307B will result in great value for the customer."