Production Resumes on Boeing 787 Dreamliners with Fifth Flight-Test Airplane
Production of Boeing resumed Jan. 29, 2009 with the join of the fifth airplane designated for flight test. 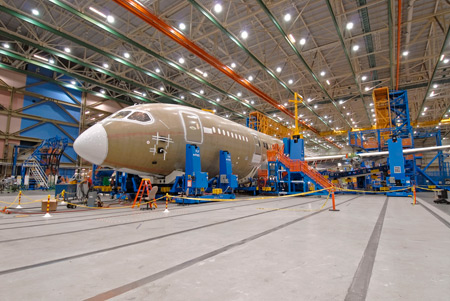 Jan. 30, 2009, Everett, WA – Production of Boeing resumed yesterday with the join of the fifth airplane designated for flight test.
This
airplane, designated ZA005, is the first to be powered with General
Electric GEnx engines. The major assemblies were loaded in final body
join over the past several days. The fuselage and wing joins occur
simultaneously.

"Sections
are arriving in Everett at the completion levels committed by our
partners and close to what is expected for mature production," Jones
said. "The substantial progress made by our partners streamlines the
assembly process, which is essential as we ramp up production."

Five
of the six airplanes designated for flight test are now in varying
stages of production. Power was restored earlier this week to the first
flight-test airplane, ZA001, and production testing has resumed as the
airplane prepares for first flight in the second quarter. Rolls-Royce
engines are hung on ZA002, in the fourth and final production position
in the factory. The third and fourth flight-test airplanes, ZA003 and
ZA004, are in the third and second production positions, respectively.

Fastener
rework is done on ZA001, nearly complete on ZA002 and progressing well
on the third and fourth airplanes, Jones said. "We have applied the
resources necessary to complete all the outstanding work on these
airplanes and keep the production line moving forward."

Assemblies
for the final flight-test airplane, ZA006, are in production at partner
sites worldwide. In all, assemblies for 30 Dreamliners are in
production at this time.

The 787 Dreamliner has orders for 895 airplanes from 58 airlines.