Shades of 1999: Passengers once again are stuck for hours on the ground. 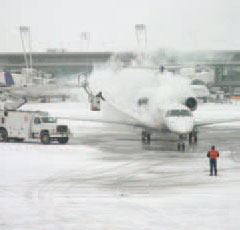 On Jan. 2-3, the first weekend of 1999, a major snowstorm struck Wayne
County Detroit Metropolitan Airport, the largest hub airport of
Minneapolis/St.Paul-based Northwest Airlines. The storm resulted in
extended ground delays on Northwest’s aircraft, stranding hundreds of
passengers on aircraft queued on taxiways for up to 8 1/2 hours. The
incident led to dozens of complaints from infuriated passengers, a
government investigation, and ghastly publicity for the airline, one of
the world’s largest.

This
bad publicity perhaps culminated in a 7,000-word investigative article
by the Wall Street Journal’s Susan Carey, published at the end of April
that year in the newspaper most closely scrutinized by the executive
flyers that major airlines depend upon for their most lucrative traffic.

“The
757’s toilets overflowed. A hysterical passenger vowed to blow an
emergency door and jump into the freezing darkness. A grown man wept
and begged to be freed. The air stank. Babies screamed. Adults
screamed, too.”

So Carey’s article began. “Anyone who flies
regularly has an airline horror story,” she continued. “But short of a
crash or a hijacking, few trips are likely to compare to the one taken
by the 198 passengers and crew of Northwest Airlines Flight 1829 over
the first weekend of the year. It arrived [from St. Martin] about 22
hours late, and was trapped on the tarmac at its destination for nearly
seven hours more. The Wall Street Journal has pieced together what it
was like aboard that plane. Fasten your seat belts. It’s a bumpy ride.”

Indeed
it was. I was riveted by the article when it was first published, and
it is still worth rereading after all these years. And this was the
chronicle of horrors aboard only a single aircraft. At the end of the
article, as the passengers finally stumble off the stricken aircraft,
the writer reminds us: “It was 10 p.m. Out on the tarmac, five other
planes still waited.”

The damage to Northwest’s reputation was
such that it was difficult to believe any responsible airline would let
anything like it happen again. But apparently memories are short, and
eight years later there were some memorable repeat performances.

As
another Wall Street Journal writer, Scott McCartney, reported on the
front page on Jan. 6, 2007, in a manner eerily reminiscent of his
colleague in 1999:

“After hours of sitting on the runway, the
toilets on the American Airlines jet were overflowing. There was no
water to be found and no food except for a box of pretzel bags. A
pregnant woman sat crying; an unaccompanied teen sobbed. The captain
walked up and down the aisle of the MD-80, trying to calm angry
passengers. At one point, families with children lined up to be bused
to the terminal, but a bus never came.”

This time it was a
flight from San Francisco to Dallas/Fort Worth that was diverted to
Austin due to thunderstorms at the intended destination. It was one of
85 flights that American diverted from DFW that day, just before New
Year’s. Passengers whose final destination was Austin were let off, but
other passengers remained stuck on the ground for eight hours before
the captain finally took the plane to an empty gate, without permission.

Then,
in mid-February, JetBlue Airways took a hit. JetBlue, a smaller but
growing lowcost carrier which has built a reputation for customer
service, left more than 1,000 passengers stranded for hours – 11 hours
in the worst case – on the tarmac during a snowstorm at its New
York/JFK base. CEO David Neeleman, who founded the carrier in 2001, was
so embarrassed that he issued a “Customer Bill of Rights” a week later,
promising among other things that customers experiencing a ground delay
on departure of more than four hours “are entitled to a voucher good
for future travel on JetBlue in the amount paid by the customer for the
roundtrip.” (What about customers experiencing such a ground delay on
arrival or at a diversion airport?)

The latest incidents brought
calls in the US for a government-mandated “passengers’ bill of rights,”
but attempts at government micromanagement of the huge US airline
system are unlikely to work. It’s in the airlines’ (and airports’)
interest to manage these things themselves. The government can best
help by relaxing such rules as flight crew duty time when they impede
crisis management during emergencies.