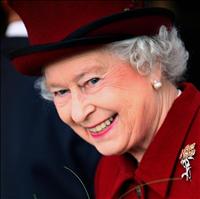 The new terminal, the cornerstone of the faded airport's revival
plan, is designed to handle up to 30 million passengers a year.

Officials hope it will be able to alleviate congestion at
Heathrow's other terminals, which are all slated for refurbishment
or replacement in the coming years.

The Queen and her husband, Prince Philip, toured the new facility
under heavy security.

Their visit came less than 24 hours after a man with a backpack
scaled a Heathrow fence and ran onto an active runway, briefly
impairing flight operations.

Police determined there were no explosives in the bag.

"This is a 21st century gateway for Britain,'' said the Queen,
who praised the new building as "environmentally responsible.''

The Queen, wearing a festive red hat, was met by executives from
British Airways and airport operator BAA at the start of an
extensive visit to the new facility, completed after more than five
years of construction at a cost of $8.6 billion.

The monarch's decision to open Terminal 5 personally – just as
she opened the airport's first passenger terminal in 1955 – reflects
the importance of the new building, which officials believe will
reverse the airport's reputation as a rundown, overcrowded facility.

Construction took more than five years, but on time and without
the cost overruns that have plagued other recent British
megaprojects.

"This is a benchmark for 21st century terminal design and will
be a catalyst for the transformation of Heathrow and confirm its
place as the best international travel hub in Europe,'' said Mike
Forster, strategy director at airport operator BAA, which also owns
six other British airports. BAA is owned by Spanish construction
Grupo Ferrovial SA.

Officials vowed that the new baggage handling facility and other
systems would be in perfect order "on day one'' so that the launch
of the new terminal would not be bedeviled by problems that have
marred other recent airport openings.

The inefficient baggage handling system at Heathrow's existing
terminals has been a major logjam for travellers; officials said the
new Terminal 5 system will be able to handle 12,000 bags an hour,
without delays.

British Airways, the only airline using the new terminal, says
travellers should spend far less time standing on check-in and
security lines than in the past because of new automated systems.

"We expect there to be no more than one person in front of you
at the express kiosks and the fast bag drops, so if you have checked
in at home, it should take no more than 10 minutes from the time you
enter the building to the time you clear security,'' said the
airline's customer service director, David Noyes.

John Stewart, a spokesman with Stop Heathrow Expansion, said the
group objects to the opening of Terminal 5 because the extra
terminal capacity would allow BAA to add roughly 80,000 flights a
year without building a third runway.

"We believe that the main motivation for building Terminal 5 is
to bring in more planes, not to help the travellers have a better
experience,'' he said. "That is our objection.''

Heathrow handles more international flights than any other
airport, although Atlanta's Hartsfield International and Chicago's
O'Hare handle more flights in total, according to the Airports
Council International in Geneva.