Governor General and Commander-in-Chief of Canada David Johnston presented the Royal Canadian Air Force with new Colours during a military parade and ceremony at Nathan Phillips Square in Toronto, on Fri., Sept. 1. 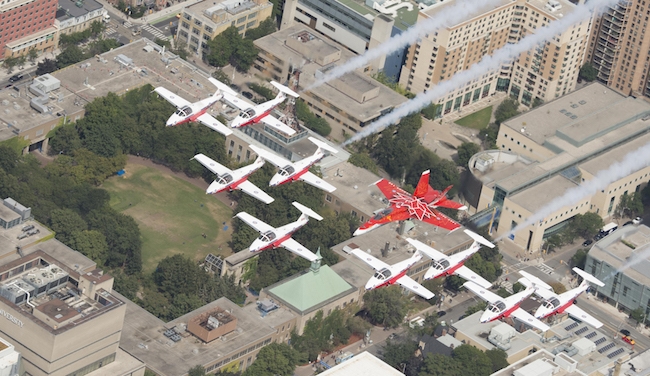 Colours are consecrated ceremonial flags carried by designated Canadian Armed Forces combatant formations and units. The RCAF carries two Colours: the Queen’s Colour, a maple leaf flag with the Sovereign’s cypher in the centre, which symbolizes loyalty to the Crown, and the Command Colour, a blue flag with the RCAF’s badge at the centre, symbolizing the RCAF’s pride, cohesion, and valour. The RCAF Colours replace the Air Command Colours that were presented 35 years ago in 1982.

“Our Colours are precious, and embody the pride, dedication, duty, and honour of all RCAF personnel, past and present,” said Lieutenant-General Michael Hood, commander of the RCAF. “As we accept these new Colours, all members of the RCAF, regardless of rank, occupation, or experience, symbolically rededicate themselves to upholding these qualities. I am delighted that we are celebrating this historical event with the citizens of Toronto, a city rich in RCAF history and present-day connections.”

Before presenting the new Colours, Governor General Johnston reviewed the parade. This is expected to be the final time His Excellency wears an RCAF uniform during his time as Governor General.

Coinciding with the parade, the RCAF, with civilian partners from Vintage Wings of Canada and the Canadian Warplane Heritage Museum, conducted a “parade of aircraft” in the sky above Nathan Phillips Square. The flypast included vintage aircraft from the Second World War and aircraft from current RCAF fleets. The Canadian Forces Snowbirds and the CF-18 Demonstration Hornet, which are in Toronto for the Canadian International Air Show, September 2-4, participated.

As the RCAF grows, it is important that Canadians have the opportunity to learn more about this technologically advanced and innovative force, both for its essential role in the defence of Canada, and for potential employment. Toronto has significant ties to the RCAF, including Wing Commander William Barker, a First World War fighter ace who served as first president of the Toronto Maple Leafs; the development of the G-suit by University of Toronto researcher Wilbur Franks; and Malton, the birthplace of the Avro Arrow.

“The Royal Canadian Air Force, as the guarantor of Canadian sovereignty, has a long and proud history of defending Canada and its allies,” said Defence Minister Harjit S. Sajjan. “The RCAF members of today can take pride in the past and all that these Colours represent as they look to an innovative and proud future.”

The RCAF was the first of the Commonwealth air forces to be granted, as a service, the privilege of carrying the King’s Colour, which it received in 1950 together with the RCAF Colour. Both were presented in the name of King George VI on Parliament Hill, Ottawa, on the King’s birthday, June 5, 1950, by the Governor-General, Viscount Alexander of Tunis. These were replaced by the Air Command Colours in 1982.

The 1982 Command Colour carried the badge of Air Command. The new Command Colour reflects the new RCAF badge that was created following the restoration of the RCAF’s historic name in 2011, and includes the RCAF’s motto Sic itur ad astra: “Such is the pathway to the stars.” The new Queen’s Colour carries the Royal Canadian Air Force’s restored name.