The past year was a good one for the folks at Bombardier Aerospace, at least those who still work there. If you bought BBD.B stock on the Toronto Stock Exchange at its lowest ebb of 87 cents on Jan. 28 2016, your shares would have gained nearly 150 per cent by year-end. No, it’s not back to the $2.82 value when the C Series aircraft program was launched in March 2005, but it is still an impressive recovery from the dismal days of 2015. 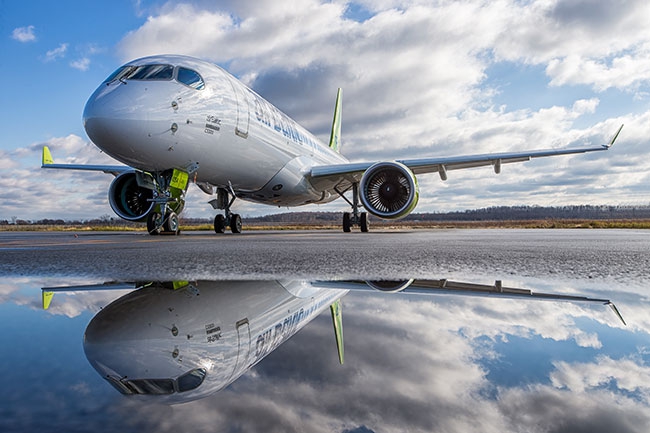 Bombardier’s CS300 service with launch customer airBaltic commenced in December 2016. The past year was a good one for the folks at Bombardier Aerospace

About a year ago, Bombardier was precipitously close to bankruptcy. The long-delayed C Series challenge to Airbus and Boeing in the commercial narrowbody aircraft market had not made a single sale in 2015. The company wrote off US$3.2 billion on the program and analysts suggested the Montreal-based planes and trains manufacturer should euthanize the beleaguered aircraft. The company’s debt had reached approximately US$9 billion. Nearly 15,000 job losses had been announced over a couple of years. Bombardier even discussed the possible sale of the C Series program, quelle horreur, to Airbus.

At the end of 2015, there were a couple of hopeful signs. Transport Canada (TC) certified the CS100 in mid-December 2015. And the Quebec provincial government anted up a billion-dollar cash infusion in exchange for an equity stake in the limited partnership that controls the C Series program. The cash is ostensibly a “repayable loan,” but some economists question whether the government will ever be reimbursed, calling it a “corporate welfare” bailout.

Bombardier has also been negotiating with the Government of Canada for a further $1 billion aid package, but is reluctant to accept the reported stipulation that the company eliminate the dual-class share structure, which enables the Bombardier and Beaudoin families to control the company despite minority ownership. Prime Minister Justin Trudeau acknowledged, “We’re working in a very productive manner with Bombardier. Our government understands the extent to which the aeronautics industry is important to the entire country, not just Quebec.”

Federal funding would improve Bombardier’s “financial flexibility,” which could even lead to development of a third C Series model in a 160- to 180-seat configuration. “We’re seeing opportunities where a next version of this plane can be more of a reality,” according to Bombardier Commercial Aircraft president Fred Cromer.

The real turnaround started in April 2016 with an order of 75 CS100 aircraft plus another 50 options from U.S. carrier Delta. Delta chief executive Ed Bastain lauded, “These new aircraft are a solid investment, allowing us to take advantage of superior operating economics, network flexibility and best-in-class fuel performance.”

Moody’s senior vice-president Russell Solomon labelled the Delta order the “beginning of the end” of the Boeing and Airbus duopoly. “The mere presence of the C Series will have at least an indirect (if not a direct) impact on the competitive dynamic between the two industry titans, causing them to sharpen their pencils even more on strategic campaigns.” Boeing reportedly gave United Airlines a 65-70 per cent discount on an order for 40 737s, $24 to 28 million per aircraft, to undercut the CS300 market price of $36 million.

Canaccord Genuity analyst David Tyerman said the deep discounting “raises the question of how profitable the next C Series order they win will be for them.” George Ferguson at Bloomberg Intelligence claimed Delta is getting the C Series for $4 million per plane less than it costs to build them in Mirabel, Que.

Cromer told a Bombardier Investors Day audience in December the C Series program will be profitable by 2020 when it is expected to reach $5.5 billion in annual revenue and deliveries of 90 to 120 aircraft per year.

“We couldn’t be in a better spot today as we think about 2017 and beyond,” Cromer added. “We really don’t have room for a large order until we get to the back end of 2019.” At year-end 2016, Bombardier had orders for 360 C Series aircraft, including a firm order from Air Canada for 45 CS300 aircraft and options for an additional 30.

The first delivery of a CS100 was in June last year to Lufthansa Group’s Swiss, with the initial CS300 entering service with airBaltic in December 2016. Bombardier is targeting 30 to 35 deliveries in 2017, including Korean Air and also hopes to achieve certification for landing on the short strip at London City Airport.

Narrowbody market dominates
If the C Series is able to ramp up to 120 deliveries a year, that would represent roughly one-third of the estimated 350 average annual requirement Bombardier estimates are needed worldwide for the so-called 100- to 150-seat market over the next 20 years. Those 7,000 aircraft, however, are only one-quarter of the more than 28,000 forecasted by Airbus and Boeing for the single-aisle market.

Overall, Boeing is projecting commercial fixed-wing aircraft demand of 39,620 airplanes, Airbus 33,000. “Despite recent events that have impacted the financial markets, the aviation sector will continue to see long-term growth with the commercial fleet doubling in size,” said Randy Tinseth, vice president of marketing, Boeing Commercial Airplanes. “We expect to see passenger traffic grow 4.8 per cent a year over the next two decades,” more than doubling today’s boardings by the 2032-36 timeframe.

To fly and maintain all those new aircraft, Boeing predicts a need for 560,000 new pilots and 540,000 new technicians over the next 20 years.

Richard Aboulafia, vice president, analysis, for the Teal Group, sounded a note of caution in the commercial space however. “The two large jetliner primes need to re-think their production ramp plans,” he said. “A very difficult world macroeconomic environment, coupled with the strong prospect of a long period of cheap fuel, means we may see these plans slow considerably.”

Bizjets still seeking recovery
While the C Series is a big story heading into 2017 on the commercial side, the business aviation trend is described as a “muted recovery” by U.S.-based aircraft broker Jetcraft. “We expect 2016 to be an important year for business aviation as the industry is at the mid-point of the recovery run in the current business cycle,” (since the 2008 recession), according to Jetcraft board chairman, Jahid Fazal-Karim. “This year will determine whether our call for the current business cycle, for example muted but resilient recovery followed by a softer downturn, will hold true. To skeptics, we may seem to be perpetually turning a corner in terms of the recovery. However, the danger is not so much the slower-than-hoped-for recovery itself, but rather the possibility of creating a self-fulfilling prophecy with an inevitable downturn.”

Honeywell’s annual forecast calls for up to 8,600 new business jet deliveries worth $255 billion from 2016 to 2026, a six to seven per cent reduction from their 2015 call. Brian Sill, president, commercial aviation, Honeywell Aerospace, said, “We continue to see relatively slow economic growth projections in many mature business jet markets. While developed economies are generally faring better, commodities demand, foreign exchange and political uncertainties remain as concerns.” However, Sill indicated “there is improved interest in new aircraft acquisition in the medium term, particularly in the 2018-19 period.”

Fazal-Karim noted, “The planned introduction of many new aircraft over the next five years will again stimulate replacement demand by introducing new technology and aircraft mission capabilities. These new aircraft models will be key in sustaining growth until at least 2021.”

The Dassault Falcon 8X entered service last October and over the next four years another eight new bizjets are scheduled to enter service: Bombardier’s Global 7000 (first flight in November 2016) and 8000 models, Cessna’s Longitude, Dassault’s Falcon 5X, the Gulfstream 500, 600 and 750 models, and Pilatus’s first jet, the PC-24.

In the business aviation engine segment, Pratt & Whitney Canada (P&WC) is expected to supplant Rolls-Royce as the market share leader, aided by the entry into service of the new Gulfstream large aircraft family.

Low oil pressure for rotorcraft
In the global civilian-use helicopter market, Honeywell has reduced its estimate by nearly 10 per cent from the previous year. The avionics and engine manufacturer now predicts that between 4,300 and 4,800 rotorcraft will be delivered in the five-year period from 2016-20, compared with a prediction of 4,750-5,250 a year ago. With the oil-and-gas sector accounting for about one-quarter of the global helicopter fleet, the energy downturn has created a sizeable surplus of aircraft. Roughly 20 per cent of the 1,900 helicopters worldwide serving the oil-and-gas industry are idle or underemployed. Two of the most visible industry casualties have been CHC Group, formerly Canadian Helicopter Company and Erickson Air-Crane, both of which filed for bankruptcy protection in November 2016.

Mike Madsen, president, defense and space from Honeywell Aerospace, offered some optimism in the months and years ahead. “Purchase interest for helicopters in training, tourism, firefighting and law enforcement categories is trending up, influenced by increased utilization rates and helicopter replacement cycles,” Madsen said. “Interest across these sectors is helping to sustain near-term demand. Looking ahead, new platforms are scheduled to enter service over the next few years, bolstering overall helicopter demand.”

New rotorcraft on the horizon include the Bell 505 Jet Ranger X, which was recently certified by Transport Canada and which will be produced in Mirabel, Que., the Bell 525 Relentless, Airbus’ H160 and H175 public services variant, the Leonardo AW609 tiltrotor and the Skye SH09 from Marenco Swisshelicopter.