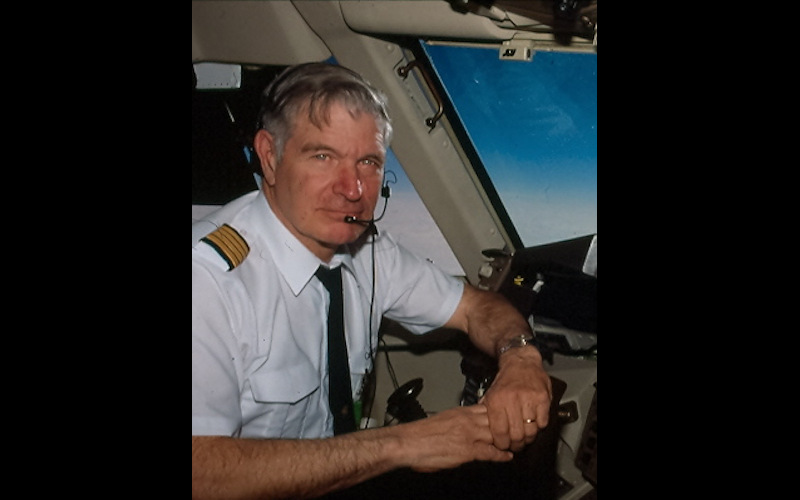 Vaughn Olmstead from 1954 to 2020 flew a range of aircraft as a bush pilot and as an airline Captain, as well as his own Piper PA-12 Super Cruiser.

Vaughn Olmstead passed away at age 89 on November 4 at home in Hawkesbury, Ontario. He was regarded as an aviation legend among his peers after one of the most storied pilot careers in the history of Canadian aviation.

Olmstead is as well regarded for a flying career spanning his work as bush pilot during the uranium rush to serving as a lead airline Captain as he is for decades of contributions made to the aviation industry. In 1957, he became one of the first members to help drive the growth of the Canadian Owners and Pilot Association, founded in 1952, for which he remained an active member until his passing.

Olmstead was born in Corning, New York in 1930, also spending time in Ohio, before immigrating to Canada and early on living in Belleville, Ontario, Elgin and Blacks Harbour, New Brunswick, as well as Caledonia and Port Wade, Nova Scotia. He served with the Royal Canadian Mounted Police for four and a half years before resigning to pursue a career in aviation.

In 1954, Olmstead moved to Blind River, Ontario, and spent two years flying as a bush pilot for Lau-Goma Airways during the exploration and mining boom of uranium. He initially flew a DH.83 Fox Moth and later Stinson Reliants, SR 9 and SR 10s and the Noorduyn Norsemen.

In 1956, Olmstead began flying for Mont Laurier Aviation and moved to Roberval, Quebec, later to Pointe Claire, and finally to Hawkesbury, Ontario. Mont Laurier Aviation became Nordair, which after many years became part of Canadian Airlines International Limited. Olmstead retired off the Boeing 767 on January 1, 1991. He had also flown the de Havilland Beaver, Canso, DC-3, DC-4, Curtis C-46, Lockheed Super Constellation, and stretch DC-8 among other aircraft – with what his family describes as a special liking for the Boeing 737.

In remembering his career, Olmstead’s family points to his adventurous career, flying gas caches with a DC-3 on skis as far north as land goes in North America for the first land survey of the Arctic islands. Several hours from any rescue teams, in -40 degree weather and without radar or GPS, Olmstead would the aircraft on sea ice, snow-covered dry riverbeds, and other unknown surfaces. He always flew the DEW-line and medical evacuation flights and took fur-traders into northern Quebec, recalls his family. In later years, Olmstead flew to Africa, the United States, the Caribbean and regularly to Europe, but his family recalls his fondest memories were always of northern flying.

The family recalls Olmstead and his good friend, and fellow pilot, Lou Goodwin making several northern trips together to teach piloting skills for northern flying and survival. Olmstead gave freely of his time to present slideshows for aviation-club meetings and to help others with their aircraft projects; teaching them from his wealth of skill and experience, in aviation, plumbing, electrical work and carpentry.

Olmstead also became an Aircraft Maintenance Engineer and with Don Power founded a company for light aircraft maintenance and restoration. He owned his Piper PA-12 Super Cruiser since 1974 and flew it last in May 2020.

For more on Olmstead aviation career and impact on Canadian aviation, view Brian Russell’s 2018 article in the May 2018 issue of COPA Flight.