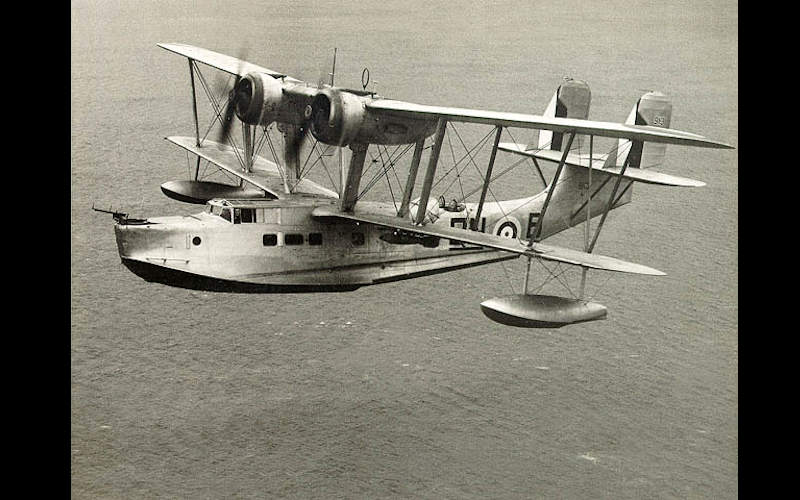 The Canadian Vickers-built Stranraers served with the RCAF until 1946. (Photo: Canadian Forces)

Joel Eilersten initially put his collection of curiosities on display for his Air Cab float plane transport customers to peruse while they waited for the plane, but it just kept growing.

The first room off the Air Cab reception office, located in the hangar that was formerly the Coal Harbour whaling station and the Royal Canadian Air Force base before that, displays a curious range of items.

A whale skull sits on top of a harpoon gun beside a air force uniform that hangs in front of a wall-mounted propeller and a half-rotary saw. Photos, news clippings and posters are arranged on the walls, and pieces from ships and planes are displayed casually beside a 1902 Sears catalogue the size of a city phone book.

“The prices are better than Amazon,” quips Eilersten, showing the range of rifles, violins, fishing tackle and even gravestones that used to be on offer from the venerable, now dead, department store.

The next room sports a taxidermy bear, a collection of boat motors and at least 100 telephones. He’s got the early candlestick models, wind-up box mounts, as well as novelty car phone and regular plastic bricks from the ’80s. Eilersten keeps whatever he finds interesting. In one corner, a steel box bristles with dozens of arms-length tools left over from the whaling station. A display case beside it holds a collection of flat, curved wrenches and monkey wrenches.

Pass through an impressive collection of chain saws — 234 in total, Eilersten said — and a scratch pad where Blackie the 18-year-old wild cat Eilersten adopted last year spends most of her time — and you come to the RCAF No. 120 Bomber Reconnaissance Squadron’s repository.

It’s a bright blue library, with some aircraft pieces displayed between books holding lists of crew, histories of various wars — including one of Eilersten’s favourite, the Forgotten War, which tells of the West Coast threat from Japanese submarines, which this base was established for defence. There’s a poster on the wall for each plane that crashed on the coastline. There were three fatal crashes between 1942 and 1945.

Eilersten tells the spooky and tragic story of the Stranraer 951 “flying boat,” a submarine surveillance plane that was lost at sea in 1943.

The crew of eight set off on a standard surveillance route, but had engine troubles and landed at sea about 100 miles out. Radio records indicate 25-foot swells. It was too dangerous for the rescue float plane to land, so that plane circled above the floating crew for over an hour waiting for a rescue boat to arrive.

Somewhere between the stormy waves and the spotter planes tagging off, the 951 bobbed out of view and was never found. The rescue boat searched extensively, but the 951 had vanished, with all eight souls aboard. What makes it spooky is that one of the spotter planes saw what they thought was a Japanese submarine in the area. Did 951 succumb to the storm, or was it sunk by the enemy? The question still hangs decades later.

Coal Harbour, a small hamlet at the beginning of a long inlet leading to the Pacific Ocean was home to a rudimentary RCAF base, built quickly in 1940 to fight the so-called Forgotten War. The first crew arrived four days after the attack on Pearl Harbour in 1941, immediately commencing submarine patrols from the air. In 1942, two attacks from submarines, one in Alaska and one on Vancouver Island’s west coast caused the evacuation of RCAF families at Coal Harbour. The risk was too high and the base wasn’t adequately built to withstand a bombing.

A year later, Japan had been forced into a defensive position and families were allowed to return, which they did, surging the population of little Coal Harbour to a peak of 1,500 people. In 1945, when WWII ended, the RCAF base was decommissioned and the thriving little town plummeted to just 100 people for a few years until the whaling station and Island Copper Mine spurred development again. It was around this time that Eilersten moved to the harbour with his American parents. He served in the U.S. military during the Vietnam war, and returned to Coal Harbour to start Air Cab and this little museum.

The hangar at the Coal Harbour dock has seen it all, and Eilersten’s little museum helps ensure the feats are not forgotten.