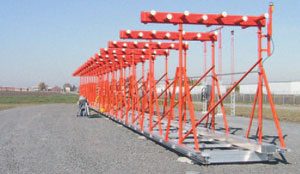 Canada’s air navigation services provider is steadily working down its
list of 41 Instrument Landing Systems (ILS) which are nearing the end
of their useful service life and are scheduled for replacement. In most
cases the affected runway ends will receive new Normarc 7000 and 7000B
systems assembled by Park Air Systems of Oslo, Norway, which meet
Category (CAT) II International Civil Aviation Organization (ICAO)
standards, but will operate as CAT I.

One
airport however, John C. Munro Hamilton International, upgraded to CAT
II capability, with the replacement of the existing ILS by a Park Air
System in 2005. This upgrade lowers the decision height (DH) from the
previous 200 feet to 100 feet, increases access by 1 per cent and will
save airlines approximately $750,000 per year, against its $1.5-million
cost.

The ILS replacement program was launched in
2001 with a capital acquisition budget of $34 million. Ten systems have
already been replaced under Phase 1, including replacement CAT II ILS
for Runway 06 at Mirabel; Runway 24 at Halifax; and Runway 06L at
Montreal- Trudeau.

Phase 2, launched in 2004, will see the rest
of the old ILS, which have seen 25-35 years of service, replaced by
2009. In addition to the Hamilton upgrade, four CAT I systems have been
replaced to date under Phase 2. ILS replacements at eight more runways
are planned for 2006.

The planned outage periods range from less
than two weeks to two months. For most, this is roughly half the time
that would be required for installing ILS on a runway end for the first
time, says Steve Bellingham, manager, navigation systems engineering,
Nav Canada. “Because these are replacements, access roads, electrical
power and communication feeds, RVR equipment, etc., are all in place.
In most cases, we are also retaining the original glide path antenna
tower and foundation, and the original localizer and glide path
equipment shelters. A key factor in the length of service outage is
whether the site conditions allow for construction of the new localizer
antenna without disrupting the operation of the original antenna.”

The
Park Air ILS have modern features such as builtin fault diagnostics,
remote maintenance and conditionmonitoring capabilities. They are less
affected by snow accumulation in front of the glide path transmitter
and their antennae systems are less affected by new airport buildings,
which has limited airport expansion initiatives with the older ILS.

The
higher uptime of the new ILS will give better service to carriers, and
translate into savings for Nav Canada, mostly by cutting the flight
inspections required after an ILS failure and repair.

For a few
runway ends Nav Canada will not be installing new Park Air ILS, which
do not support localizer back course (BC) non-precision approaches.
Rather, existing Philips PHL7801 systems, purchased by Transport Canada
from Philips and Canadian Marconi Co. in the 1980s will be redeployed
from other airports which, in turn, will get a new Park Air ILS. There
are 100 ILS installations at Canadian airport runway ends. Eight have
associated localizer BC approaches.

In Resolute, for example,
Nav Canada removed the older PHL 7002 ILS from Runway 35 True and
replaced it with a PHL7801, preserving the BC approach to Runway 17.
Nav Canada had the same plan for Ottawa’s Runway 07, to preserve its BC
approach procedure to Runway 25. St. John’s Runway 16 received a PHL
7801 in September 2004, thus preserving its BC approach procedure to
Runway 34.

At
Val-d’Or the Runway 36 BC approach procedure was removed with the
installation of the new ILS for Runway 18. Nav Canada assessed air
carrier equipage and the impact on airport accessibility resulting from
the loss of that BC: The impact will be minimal, as there is an
existing RNAV procedure that provides similar capability as the BC.

With
the Wide Area Augmentation System (WAAS) becoming operational in Canada
last October, airport accessibility will now improve even more because
WAAS supports very accurate lateral and vertical guidance to approach
minima of 250 feet above ground and three-quarter statute mile
visibility, for aircraft equipped with WAAS avionics, and without the
requirement for installation of any ground-based navigation aids.

The
final task after installing an ILS is to validate the signal in
strength and accuracy with a commissioning flight check using Nav
Canada’s Challenger 601 or Dash 8 aircraft. This normally requires two
full days of flying and approximately 45 approaches with the
Challenger, during which the ILS signal in space is verified against
ICAO standards.