Building entrepreneurship and innovation with the nation’s legacy flag carrier 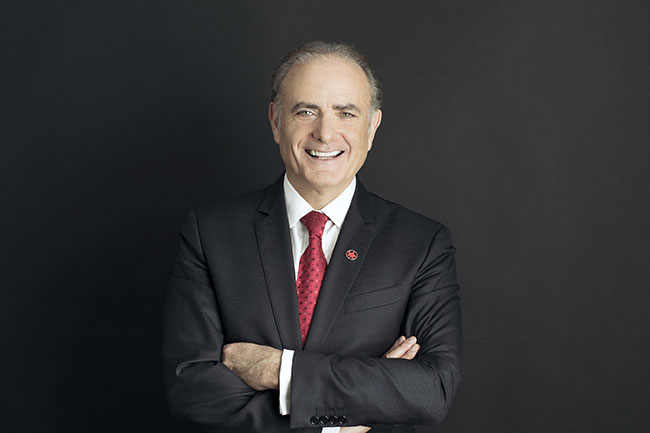 Calin Rovinescu’s accomplishments in business and his contributions to Canadian social causes earned him an induction into the 2020 Canadian Business Hall of Fame. PHOTO: Air Canada

Could a pre-Calin Rovinescu Air Canada have survived Covid? There are too many variables to give a direct answer, including whether the federal government would have been more willing to prop up a weaker Air Canada. What is clear, is that prior to Rovinescu’s return in 2009 as chief executive officer, Air Canada was charting a perilous course. Burdened with debt and a $4.2 billion pension shortfall, losing money and market share, analysts were giving even odds on a second trip into bankruptcy protection.

Under Under Rovinescu’s leadership, a re-energized Air Canada has transformed into a global powerhouse. The airline has renewed its fleet, hammered out labour peace, developed strategic connections to the US market that feeds passengers into its international route network, launched Rouge, a low-cost leisure airline, acquired rival Air Transat (subject to regulatory approval), navigated the logistical nightmare of the Boeing 737 MAX grounding that parked 20 per cent of its narrow-body capacity indefinitely and pushed out delivery of another 12 aircraft that were expected in 2018, restored the depleted pension fund and posted a $1.4 billion profit before Covid-19. An impressive checklist in an industry driven by checklists. According to the Globe and Mail, Air Canada was the best performing stock on the TSX, in all industrial categories in the 10 years since Rovinescu took over, ending December 31, 2019.

Air Canada also delivered a life line to the struggling Bombardier C Series (now Airbus A220) program with a break out order ahead of Delta Airlines, and restored the traditional ‘rondelle’ to pride of place on the tails of its fleet as part of an ambitious rebranding.

Now, with the 737 MAX returning to the skies, a national Covid vaccine program taking root and expectations that passenger traffic will begin to rebound in 2021, Rovinescu has called it a day. “While Covid-19 has decimated the global airline industry, fortunately we entered the pandemic much healthier than any other airline in the world,” Rovinescu said in a statement announcing his retirement. “Air Canada will be extremely well positioned for the recovery when borders reopen, travel restrictions are lifted and the broader economy is functioning again.”

Mike Rousseau, Air Canada’s deputy chief executive and chief financial officer will succeed Rovinescu on February 15. What he takes over is a tighter and more aggressive ship than the one his predecessor inherited.

In January 2020, at the Air Canada hangar in Montréal, the airline unveiled the final piece of its fleet modernization; its first Canadian-built Airbus A220 300. An aircraft ideally suited for Air Canada’s long and thin city pairs. “The arrival of a new aircraft type is always a major event for an airline,” Rovinescu told a crowd of dignitaries and Air Canada employees gathered for the event. “We remember it for a quarter of a century – maybe forever. Each new jetliner begins new capability and creates new opportunities for Air Canada. We are pleased to have made a landmark order in 2016 that paved the way for major airlines like Delta [and] JetBlue to follow suit.

The unveiling was also a company tribute to the legacy of its chief executive. The last three letters of the airplane’s ‘C-GROV’ registration were in honour of Calin Rovinescu (the ‘C’ being a happy coincidence). “This designator was hand-selected by the Air Canada team as a small way of recognizing and thanking [him] for his incredible and historic decade as CEO of Air Canada,” an emcee told the crowd.

Launching a rebuild of Air Canada in 2009 was nothing new for Rovinescu. The corporate lawyer has either advised or undertook two previous makeovers, including privatization in 1988 and as its chief restructuring officer during bankruptcy protection. He also helped fend off a hostile takeover by the Toronto-based Onex Corporation in 1999 (Onex would buy WestJet 20 years later) and restore operations after 9/11. In a November 2019, pre-Covid Report on Business cover story where he was named Canada’s Outstanding CEO of the Year (for a second time), Rovinescu compared Air Canada’s 9/11 challenge with the grounding of the 737 MAX.

“9/11 was catastrophic for the industry. It was sudden, it was overnight. But what we faced with the grounding of the MAX was actually much, much more significant and much more complicated for us to deal with.”

Rovinescu has always attached an entrepreneurial lens to the reinvention of the business. “When you hear the words entrepreneurship and innovation in the context of airlines, it typically refers to those who have recently started an airline,” he told Wings in a 2012 interview, “However, if you take a legacy structure that has 75 years of history and needs to have a different model to operate as opposed to simply being destroyed, the drivers in that transformation are going to have to be just as entrepreneurial and innovative.”

The entrepreneurial focus included an ambitious strategy to turn Air Canada into a North American global airline by utilizing so-called ‘sixth freedom’ flying out of its Canadian hubs, deploying Boeing 787s on emerging markets in China, India and Latin America, and growing connecting traffic, especially out of the U.S. where each 1.5 per cent increase in sixth freedom passengers adds more than $600 million to revenues. Prior to Covid and the closing of the border, Air Canada operated up to 230 daily flights to 58 U.S. airports. The rapid expansion global strategy left some analysts and investors nervous early on, but it has paid dividends. 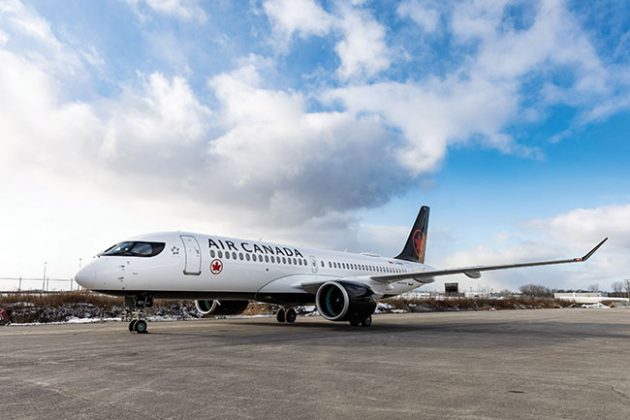 “There are strong U.S. domestic hub carriers, but none of them play the role of global hub carriers like many airlines in Asia and Europe,” Benjamin Smith, Air Canada’s then president of airlines and chief operating officer (now chief executive of Air France-KLM) told Wings at the 2017 unveiling of a return to basics livery. “We are already the largest foreign carrier into the U.S. You can’t transit in the U.S., but for international travellers you can transit out of Toronto, Montreal and Vancouver like you can Amsterdam and Seoul.”

A more visible example of Rovinescu’s entrepreneurial spirit has been Rouge, its low-cost international leisure airline, deploying 767-300ER and A319 aircraft spun off from the mainline fleet. Talking to Wings ahead of the 2013 launch, he described Rouge as a growth opportunity that would allow Air Canada to restore services to vacation markets that were no longer competitive because of a higher cost structure, and to open new leisure services such as European holiday destinations on a season basis. “All legacy carriers have to consider some strategy to deal with low-cost carriers,” he said at the time. “We need to serve some of the sun destinations and pure leisure destinations with a product that is different from the competition – a full-service product.”

Rouge is consistent with Rovinescu’s approach to the challenge of low-cost airlines. “The competition that comes from low-cost carriers is very appealing,” he said, “because every day of the week somebody is doing something new. That forces us as an organization to be more competitive.” To launch Rouge, Air Canada had to negotiate labour concessions, including lower wages, greater worker flexibility and lower overheads compared with the mainline carrier to increase capacity 18 per cent and cut operating costs by up to a quarter. Unlike short-lived, low-cost brands such as Air Canada Tango and Zip, Rouge has confounded sceptics with staying power. Since it’s launch with two 767ER and two Airbus A319 aircraft, the Rouge fleet has grown to 21 767s and 38 Airbus narrow-body’s, including 14 of the larger A321.

You could have bought 1,000 Air Canada shares for less than $800 when Rovinescu became CEO in 2009. That investment would be worth over $21,000 today, despite markets being bruised by Covid-19. And what of the recovery? Rovinescu was somewhat prescient in his 2012 Wings interview, three years into the restructuring. “If I look at [a] continuum of 25 years dating back to privatization, we have had a lot of structural change and a lot of good positive steps. Privatization was the first step. Restructuring was the second step. There will be a third step, a fourth step and a fifth step.”

Reinventing Air Canada post-2009 can be considered a third step. The grounding of the 737 Max was enough to force a weaker and less resourceful airline off of its stride. And nobody could have predicted the devastation Covid-19 would have on the industry. Unlike other jurisdictions, Ottawa has been slow to provide financial assistance to Canada’s beleaguered airline industry outside of the Canada Emergency Wage Subsidy. In his final months, Rovinescu has been instrumental in mitigating the negative impacts of the pandemic including the retirement of 79 older, thirsty airplanes such as the Boeing 767, cancelling orders for 12 Airbus A220 300 and 10 Boeing 737 Max 8 aircraft, while deferring deliveries on another 31 narrow-body jets over a three-year period (with a backup plan to buy more aircraft starting in 2022 if the rebound is stronger than expected). Air Canada has raised approximately $6 billion and is engaged in a much deeper costing cutting than first announced that should result in $1.5 billion in savings this fiscal.

“Our Covid-19 Mitigation and Recovery Plan is now nearly complete and the remaining steps will be put in place prior to year-end,” Rovinescu said in November. “We continue to implement a series of significant fleet, capacity, network and workforce reductions that are required for the next several years before we rebuild from that smaller footprint.”

Two recent building blocks that incoming CEO Rousseau will add to the pile will be the finalizing of the acquisition of Air Transit, including a renewed fleet of 199-seat Airbus A321LR long range narrow-bodies, and a potential Covid-19 triggered shift to a dedicated freighter fleet. “We liked Transat before Covid, and we continue to like Transat after Covid,” Rovinescu told the Montreal Gazette. All-cargo flights were one of the few bright spots in 2020, and Air Canada is considering converting some 767s into dedicated freighters to cash in on growing e-commerce.

The incoming CEO has also flagged the likelihood of adding A321LR’s to the mainline fleet, following the cancellation of 11 Max aircraft. “It gave us some optionality on potentially some other plans we might want to look at in the middle of the decade,” Rousseau told the Wolfe Global Transportation Conference, as reported by Forbes Magazine. “The LR would be more interesting to us than the [Airbus] neo. We’ll see how the market evolves.”

Under Rovinescu’s leadership, Air Canada has been named The Best Airline in North America eight times in the last 10 years. He has been recognized as Strategist of the Year and the Financial Post Magazine’s Outstanding CEO of the Year in addition to The Globe and Mail’s two recognitions. He has served as chair of the Star Alliance chief executive board and chair of the board of governors of the International Air Transport Association. In 2018, he was appointed a member of the Order of Canada and awarded the Executive Leadership Award at the Airline Strategy Awards in London, England.

“I have enjoyed a unique and very special relationship with Air Canada and our outstanding people for over three decades, on the frontlines of many of the company’s defining moments,” Rovinescu reflected in a statement. “But, more than anything else in my career, I am especially proud of the company’s transformation over the last dozen years during which we built Air Canada into one of the world’s leading carriers and a global champion for Canada. This is directly attributable to the efforts of the wonderful women and men of Air Canada who have supported this multi-year transformation with innovation, hard work and great devotion.”