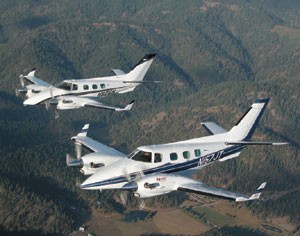 Here’s a riddle: What’s new and old (but still in good shape), covers
150 metres per second, has eight blades, and climbs very quickly? The
answer is in Spokane, Washington at the Felts Field home of Rocket
Engineering, a company that has done some remarkable aircraft
modification work since 1990. Its latest project, and the answer to the
riddle, is the Royal Turbine, a Beechcraft Duke turboprop.

Rocket
Engineering’s first modifications involved installing a more powerful
piston engine in the Mooney 201 and 231 (206 aircraft were modified).
President and CEO Darwin Conrad then turned his attention to the Piper
Malibu/Mirage (PA-46), a pressurized, single pistonengine airplane. He
knew that replacing its original engine with a Pratt & Whitney
Canada PT-6A would result in significantly better performance and
engine reliability.

Two variants of the PA-46 turbine conversion
are offered: the JetProp DL and DLX. The DL includes a new, 550-hp PT-
6A-21 engine and costs US$459,900. The DLX’s price is US$50,000 more
because of the 560-hp PT- 6A-35 (de-rated from 750 hp). Both
conversions include a new four-blade Hartzell reversing propeller, two
batteries, a custom-made cowling, and more. The engines have a TBO of
3,600 hours and a five-year warranty. An optional Shadin engine trend
monitoring (ETM) system eliminates the need for a hot section
inspection and costs US$19,900 installed. The ETM system has extended
the TBO on some PT-6As to 6,500 hours. To date, 180 PA-46s have been
converted, including two from Canada.

After the JetProp program was established, Rocket
Engineering designed a PT- 6A-21 conversion for the Beechcraft Bonanza
(B36TC). The cost is US$409,900. The Turbine Air initially climbs at
3,000 fpm, has a maximum altitude of 25,000 feet, and consumes 29 gph
while cruising at 225 KTAS at FL180. The conversion includes a header
tank to feed the engine, a second elevator trim tab actuator, and an
increase in useable fuel from 120 to 136 gallons. Since the B36TC is an
unpressurized aircraft, a fan is installed to direct jet fuel odors
overboard and Rocket Engineering designed a lightweight stalk that
attaches to the pilot’s headset as part of the oxygen delivery system.
To date, ten B36TCs have been converted.

A reliable, fast, and
efficient twin, the Beechcraft Duke features a rugged airframe, quality
construction, and a striking appearance. Duke production began in 1968,
with the A60 coming out in 1970 and the improved B60 being built from
1974 to 1982. Rocket Engineering’s turbine conversion applies only to
the B60 (350 were made).

For the Royal Turbine conversion, a B60
owner chooses either PT-6A-21 or -35 engines. Being new, the 3,600-hour
TBO and five-year warranty apply. The conversion cost is US$807,000 and
US$907,000 respectively, and includes new four-blade, Hartzell
reversing propellers and two 24-amp sealed leadacid batteries, which
are installed in the forward nose compartment. The Duke’s Janitrol
heater is modified to burn jet fuel, and annunciators, engine switches
and instruments are added to the new cockpit panel. The engine
instruments are analog with digital readouts, which eliminates the need
for a propeller synchrophaser. New cowlings, low-drag exhaust stacks,
inertial ice separators and other components are included in the
conversion price.

The average price of a B60 Duke is US$280,000, with an
average TTAF of 3,300 hours. The cost of a Royal Turbine conversion
(-35 engines) and all the options listed is approximately US$1.11
million. Factor in the average aircraft purchase price and the total is
US$1.39 million.

DEMO FLIGHT
In October, I visited Rocket
Engineering’s facility and had a demo flight in the Royal Turbine. The
company is an FAA-approved parts manufacturer and makes components for
its conversions such as cowlings, nacelle tanks, engine mounts and
connectors.

The aircraft’s cabin has a surprising amount of
headroom, as Tim Moore, a company sales rep. showed me before the demo
flight (Tim is 1.92 metres tall). To enter the cockpit, I had to
squeeze between the seats, but once in place, there was adequate space
between Conrad and myself. He mentioned various features of the Royal
Turbine, including the semi-transparent knob on each propeller lever
that illuminates in the event that torque, propeller rpm, and ITT
decrease significantly. The pilot retards the lever with the
illuminated blue knob to feather the failed engine’s propeller.

Starting
the PT-6A-35s was straightforward. After confirming that switches were
in their correct positions and circuit breakers were in, Conrad turned
on the battery, confirmed adequate voltage, activated the fuel pump and
auto ignition, checked the annunciator panel, and engaged the left
engine’s starter. Once N1 reached 15%, fuel was introduced and the ITT
rose to 630°F, well below the maximum of 850°F. The ITT peak during the
right engine start was similar. N626N’s avionics included an altitude
pre-select, which Conrad recommends because of the high climb and
descent rates possible in the Royal Turbine. Like the JetProp and
Turbine Air, most converted B60s will probably be flown single-pilot.

Manoeuvring
the Royal Turbine on the ground is not difficult due to the B60’s
nosewheel steering and differential power when required. Braking to
control taxi speed is needed infrequently thanks to the propellers’
beta range. After completing the aircraft checks and receiving
clearance to take off, Conrad taxied N626N onto the runway, momentarily
stopped the aircraft, then advanced the throttles. Once torque had
increased to takeoff power, which took only a few seconds, N626N
accelerated quickly enough that I was pressed firmly into the back of
my seat. Within ten seconds and 1,000 feet from our starting position,
we were airborne. The aircraft had 90 gallons of fuel onboard and
weighed approximately 5,450 pounds.

After a few minutes, he demonstrated how the Royal
Turbine handles with one propeller feathered. The aircraft will not be
difficult for pilots to control in the unlikely event of an engine
failure thanks to Beechcraft’s stable design and Rocket Engineering’s
engine alignment work. At FL230, the Royal Turbine will cruise at 240
KTAS on one engine.

Heading west toward Felts Field, Conrad put
N626N in a steep descent, which was not a problem for us thanks to the
B60’s pressurization system. Leveling off, he slowed the aircraft,
joined the circuit, and extended the landing gear. On final approach,
Conrad reduced the airspeed to 120 kt and extended flaps to full,
decreasing to 90 kt over the threshold. After touching down, he applied
reverse thrust, then normal braking. Our weight was about 5,200 pounds
and N626N used about 900 feet to land.

During the past 15 years,
Rocket Engineering has developed niches that have appealed to many
pilotowners and operators. The Royal Turbine is the latest example and
Conrad estimates that the company’s latest endeavour will result in 200
Royal Turbine conversions.

Canadians wanting their B60, B36TC,
or PA-46 piston aircraft converted to turbine by Rocket Engineering
will require Transport Canada approval of the relevant Supplemental
Type Certificate and a Private Operator Certificate, obtained through
the Canadian Business Aviation Association.