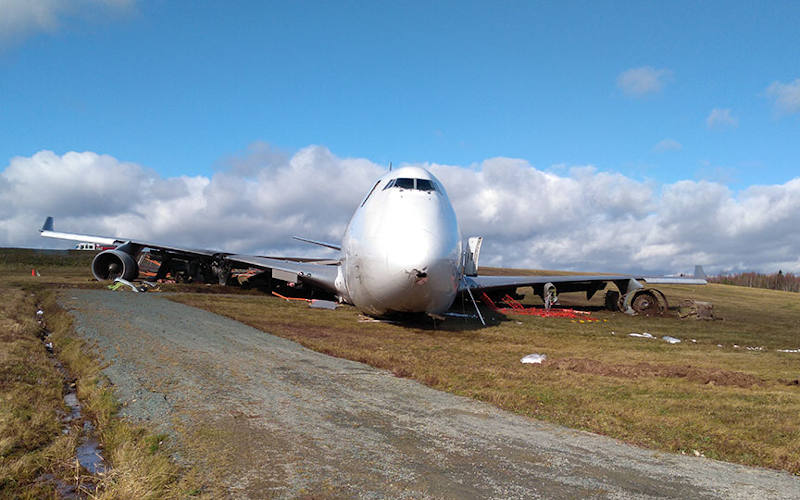 HALIFAX — Confusing runway instructions, an unexpected tailwind and crew fatigue were factors that contributed to a 2018 runway overshoot that destroyed a Boeing 747 cargo jet at Halifax Stanfield International Airport, the Transportation Safety Board of Canada says.

In an investigation report released Tuesday, the independent agency also cited insufficient braking on a wet runway, noting that the aircraft was wrecked as it slid down a grassy embankment 270 metres past the end of the runway. All three crew members received minor injuries, but the sole passenger – a deadheading pilot – was not injured. 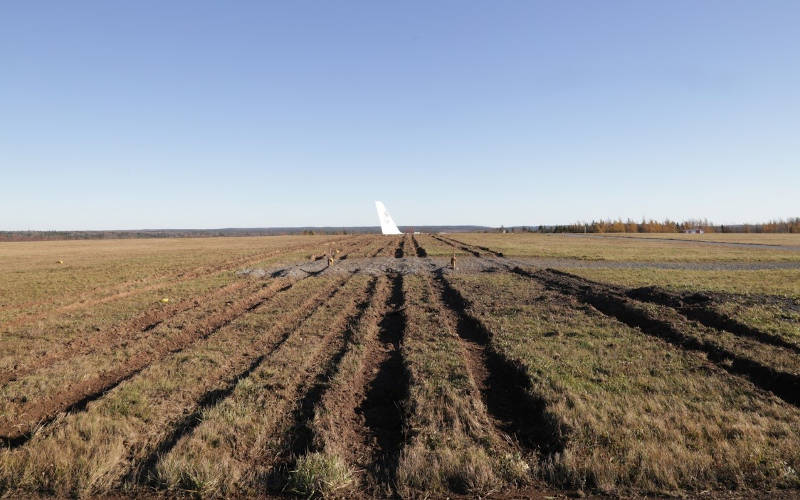 The massive aircraft, operated by Sky Lease Cargo based in Miami, Fla., started its ill-fated flight at O’Hare International Airport in Chicago early on Nov. 7, 2018. The crew had planned to pick up live lobsters in Halifax, which were destined for markets in China.

But there were problems even before Flight 4854 took off.

The board’s investigation found that a confusing notice to pilots – known as a Notice to Airmen or NOTAM – led the crew to wrongly believe the longer of the two runways in Halifax – Runway 23 – was not available for landing. As a result, they planned to land on Runway 14, which is 2,347 metres long.

As the aircraft approached the runway in the dark just after 5 a.m., air traffic control failed to tell the crew about the availability of Runway 23, although an automated information system was broadcasting that information, the report said.

Less than 90 seconds before the jet crossed the threshold, the crew realized there was a tailwind to contend with, as well as a rain-slicked runway. Airplanes typically take off and land into the wind, which offers pilots more lift and, as a result, more control. But tailwind landings are possible within certain limits.

“Upon landing, a series of events prevented the aircraft from decelerating as expected and caused the aircraft to drift to the right of the runway,” the report said.

The document said that for some unknown reason, the thrust lever for the No. 1 engine was moved forward of the idle position, causing the speed brakes to retract and the autobrake system to disengage. Those changes increased the distance required to bring the aircraft to a stop.

“The pilot monitoring ? was focused on the lateral drift and, as a result, the required call-outs regarding the position of the deceleration devices were not made,” the report said.

The brakes were applied eight seconds after touchdown, but maximum braking effort did not occur until 15 seconds later, the report said. At that point, the 183,500-kilogram jumbo jet was about 240 metres from the end of the runway

“From this position, it was not possible for the aircraft to stop on the runway,” the report said.

As the plane skidded down the embankment, it hit a large localizer antenna, its landing gear collapsed, two of its four engines were torn off and there was a small fire under the tail section, caused by a severed engine.

The board identified two risk factors for fatigue that would have degraded the crew’s performance: the early morning timing of the flight and insufficient time for restorative sleep in the 24-hour period leading up to the overrun.

Because of “acute sleep disruption” and the timing of the landing, “the performance of the flight crew at the time of the accident would likely have been degraded by fatigue,” the report said.

“However, the crew did not report feeling fatigued at the time of the occurrence.”

In late 2018, the safety board said there had been an average of nine overrun incidents every year in Canada since 2013.

The safety board also noted that the uneven terrain where the aircraft came to rest was beyond the runway’s 150-metre runway end safety area, which is designed to reduce the risk of damage to aircraft that land short of the runway or overshoot it.

The report said that in 2007, the board recommended Transport Canada require all runways longer than 1,800 metres to have a 300-metre runway end safety area or a means of stopping aircraft that provides an equivalent level of safety.