Landmark’s Hangar 9 is a showcase of current hangar design and safety. 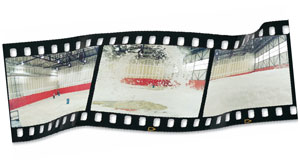 Few people give any real thought to the prospect of a fire emergency in
the hangar. Most of us live in pleasant bliss, thinking it will never
happen to us. Those who have been through the experience take a very
different view, and fortunately it is the one that professionals in the
field take to heart on our behalf.

The
standard fire protection system for most hangars today is a combination
of ceiling water sprinklers and some wall-mounted or mobile fire
bottles. That has been the norm for as long as we can remember. The
system is there, sometimes forgotten and in extreme cases never checked
or updated. But when it comes time to use it we need instant and
effective action.

Most aircraft owners – hangar tenants or not –
do not usually ask about such things when they make the decision to
entrust their aircraft to an FBO or aviation club for hangar services.
They are usually more concerned with the cost per square foot than the
emergency systems and protocols. But they should pay more attention to
this – even though a hangar owner’s insurance may cover the cost of
repair or replacement, the better scenario would be to have proper
safety systems that ensure everything works as it should and damage is
minimized.

The people who make a point of thinking about these
things have been acting to improve what was, by today’s standards, an
ineffective form of protection and suppression. The old approach to
fire response was to throw tons of water at the problem and hope it
beat the fire out. That is the principle that most older hangar fire
systems were based upon.

Today, we understand that there are
three elements necessary to create and support a fire – oxygen, fuel
and heat. The three form what specialists call the “Fire Triangle,”
creating the chemical reaction known as fire. If any of the three
elements is removed from a fire, the Fire Triangle becomes incomplete
and the fire will be extinguished. So when fighting a fire – or
planning a firefighting system – you can either remove oxygen from the
area of the fire, or remove the fuel (or its source), or reduce the
temperature. And that is the premise behind modern hangar fire safety
systems.

Any new hangar or hangar renovation today is subject to
the new rules. Nobody knows more about this from an FBO operator’s
perspective than Andrew Storey, general manager of Landmark Aviation
Aerocentre in Toronto. On September 7, he and his team celebrated
completion of over a year’s worth of construction and renovation with
the formal opening of a new and fully revitalized Hangar 9 – a
firesafety model.

Located in the north-end general aviation
complex at Pearson International, Hangar 9 had become an old,
dilapidated and unusable facility. After serving as the centre of
corporate aviation for the airfield since its construction in the early
1960s, time and badly conceived renovations – most notably using
asbestos for insulation – led to it formally being closed. It was
condemned for demolition. At a time when hangar space was at a premium,
this became a very real issue and point of contention among the FBO and
corporate operators at YYZ. It meant that close to 100,000 square feet
of space was sitting empty!

In the winter of 2005 the Greater
Toronto Airports Authority opened a bid/tender process to allow a new
lease of the lands that were currently unused at the north end, which
included an 8,000-sq-ft FBO lounge and Hangar 9. Landmark was the
successful bidder and in the fall of that year, after a structural and
environmental review, work was started on redeveloping the hangar. One
of the key elements that came out in the review was that the 1960s
steel framework, milled in Scotland and imported to Canada, was sound.
And it was determined that the facility base and basic foundations were
also sound. This was an important finding as it allowed these elements
of the overall facility to be reused and integrated into the resulting
new plan. Over the months that followed, the shell, guts and mechanical
services were removed, leaving a basic and sound base and framework
upon which to mold Landmark’s design.

Hangar 9 was first
constructed at a cost of $2-3 million. The recent renovation and update
amounted to $13 million, a fair percentage of which is the cost of new
fire detection, suppression and safety systems. As Storey himself said,
it is a lot of planning and money for something we hope will remain
unused.

Landmark’s Hangar 9 is statement of current hangar
design and safety. It boasts four separate bays, equally dividing the
100,000 square feet. Each bay has traditional manual pull station fire
alarm units but this is backed up with a series of infrared detectors
for smoke and flame. When an alarm is triggered, the system is only
activated in the bay from which the alarm is sent. And when an alarm
triggers, the large hangar doors to that bay are automatically closed
as the foam fire suppression system kicks in. The foam system selected
for use in Hangar 9 mixes with water and is dispersed in the affected
bay by ceilingmounted fans. The large fans evenly distribute the foam
over the entire hangar area. And foam has been proven to be one of the
best ways to smother a fire – or more specifically, remove the oxygen
from the Fire Triangle. It is so effective in this application that
during a required full-system test in June, in no less than three
minutes from the time of an alarm there was a total coverage over the
hangar bay to a height of seven feet. For purposes of the test, the
system was shut off at that point. During an actual emergency, it would
continue until fire crews arrived and took control of the situation.

In
addition to the foam, each bay is covered with a traditional sprinkler
system that is tied into the water mains – just in case the fire is not
smothered by the foam. And what if the fire spreads and ignites in an
adjacent bay? There are two foam tanks in the system and each use
requires only 1.5% of the total reserve capacity. Storey says this
means that if there ever was an issue in a bay that used the system,
once everything is under control Landmark can conceivably continue
business as usual in the remaining bays confident that the system is
still capable and charged sufficiently to protect them.

One
thing to note about this application of fire protection is that this
system that is designed and approved to work to the code as applied to
hangars with door height of 28 feet or less and no more than 30,000
square feet per bay. For anything over this, the requirements are
different and involve a water deluge system and extensive on-site water
reservoir.

In addition to the hangar refit at YYZ, Landmark has
incorporated an addition to the facility of 22,000 square feet of
tenant office and shop space. To make certain that power is never an
issue, there is a backup emergency generator that could provide enough
power to run not only the hangar, but most of the airport and the
surrounding community.

Landmark Aviation (or Piedmont Hawthorne
as it was known earlier this year) has been doing business in Canada
since 1999 when it first assumed ownership of Shell Aviation Canada’s
FBOs at Vancouver, Calgary and Toronto. The addition of the new hangar
and ramp space at YYZ has created the largest branded FBO in Canada –
and one of the largest in the entire Landmark operation.