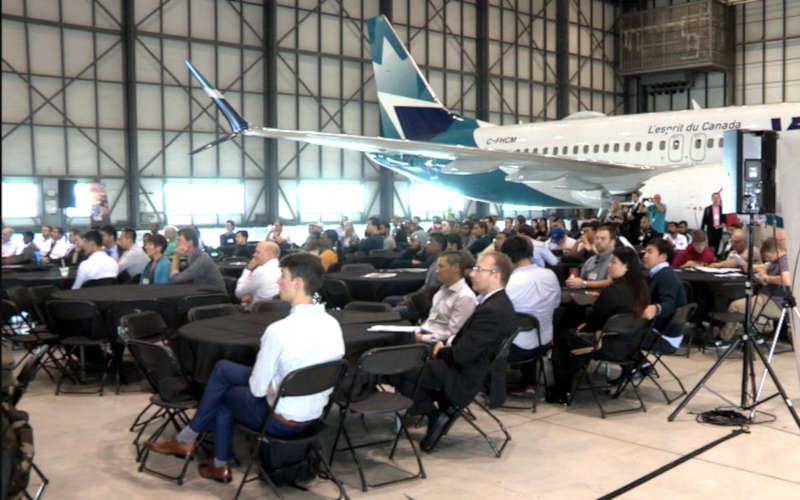 WestJet opened up its Mississauga hangar on September 21 to help inspire the future of aviation.

Approximately 325 attendees, in addition to more than 100 industry professionals representing 50-plus exhibitors, attended last weekend’s Careers in Aviation Expo held inside WestJet’s hangar in Mississauga, Ontario. This was the second leg of the 2019 Careers in Aviation Expo program, after a May event took place inside WestJet’s new 787 Dreamliner hangar at the Calgary International Airport.

Scenes from Careers in Aviation Calgary

Charles Duncan, executive vice president and chief strategy officer of WestJet, kicked the day off in Mississauga with a 30-minute keynote address about the growth and direction of the Calgary-based airline, before answering questions from the engaged audience for close to 20 minutes.

In between these main-stage presentations, dozens of attendees took advantage of more than 40 breakout sessions throughout the day. They had the chance to sit down with AMEs (avionics, structures, M1 and M2) and pilots (both fixed wing and rotary wing), in small groups, for first-hand accounts of career development in aviation.

Attendees were also able to sit in on four Human Resources Breakout Sessions throughout the day. Company briefings were provided by NAV Canada, AeroCourse, Skyservice, Harbour Air and the Canadian Armed Forces.

More than 325 attendees had access to 50-plus leading companies exhibiting at Careers In Aviation.

Five main-stage presentations and 40 breakout sessions provided a range of content to attendees.

WestJet’s brought a 737 MAX into the hangar for attendees.

AMEs share insight into their careers during the Breakout Sessions.

WestJet pilots share insight into their careers during Breakout Sessions.