Temperature on the tarmac at Orlando Executive Airport is easily reaching above 100 degrees Fahrenheit even if the official high for October 17 registers 94 – 10 degrees above the norm. A sign of the times, perhaps; dozens of business jets on static display provide a clearer picture of change. 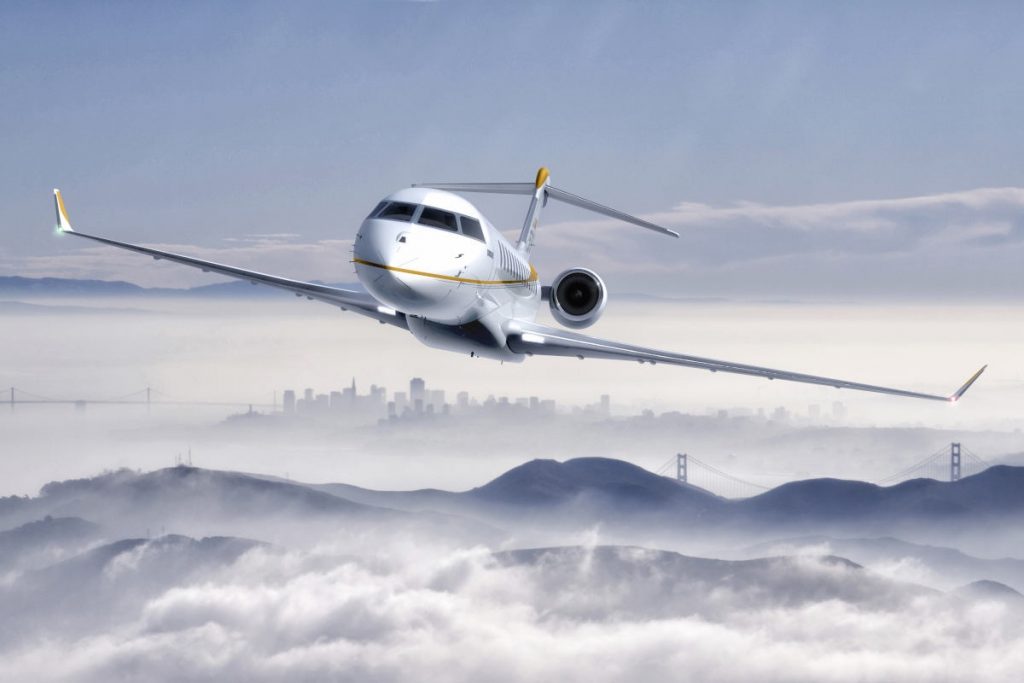 Forty years ago, at this very NBAA-BACE program, Bombardier introduced its Challenger 600 series. To put this business aviation workhorse into perspective, Bombardier delivered 20 Challengers in its most recent quarter, stating it outperformed competing medium-category deliveries by a ratio of 5 to 1 or higher.

A couple of years ago, Bombardier celebrated the thousandth aircraft delivery in its Challenger 600 series, which reached 1,100 by the end of 2017. Today, a Challenger 650 with gold and silver trim sits beside a 350 in Bombardier’s NBAA static display, with a Global 6000 and Learjet 75 at the entrance. Near the end of its allotted tarmac space, beside a busy, air-conditioned business hut, sits the Bombardier Global 7500 newly type-certified by Transport Canada. The company has been developing this clean-sheet aircraft for 10 years to become its next business aviation milestone series.

The large-size category Global 7500, projected to hold a typically equipped list price of $72 million, is now the world’s longest-range business jet, rated for 7,700 nautical miles at its optimum cruise speed of Mach 0.85 – connecting New York to Hong Kong and Singapore to San Francisco, nonstop. It holds Mach 0.925 speed as one of the world’s fastest business jets. Bombardier has since been awarded 7500 certification from the Federal Aviation Administration and expects the European Aviation Safety Agency to follow shortly, a final marker the company wants in place before putting the Global 7500 into service.

Manufacturing of the aircraft is in full swing at Bombardier’s Toronto production facility and the company expects to deliver 20 Global 7500s in 2019, followed by 40 deliveries in 2020, which will be close to the aircraft’s full annual production level. Bombardier has been preparing for the Global 7500’s manufacturing and completion processes since the program began 10 years ago to take advantage of its clean-sheet potential and disrupt the business aviation industry.

“You make the most critical decisions at the beginning of the process, because after that you are working at tweaking, not revolutionizing. We designed the 7500 with an integrated manufacturing concept in mind,” says Mark Masluch, director, communications and public affairs, Bombardier Business Aircraft. “Components come pre-adjusted to fit onto laser measuring and GPS positions on the production line; and those methodologies and processes were validated on the flight test vehicles.”

Bombardier ultimately produced five Global 7500 test vehicles with FTV1 taking off on November 4, 2016. The company achieved Transport Canada type certification in 2,700 hours, only 18 months after first flight – one of the aviation world’s most efficient development programs in terms of size, complexity and execution. “It was more flight validation than it was flight testing,” Masluch says, pointing to extensive static testing and system integration on the ground to reduce program risk. “We weren’t flying an hour more than we needed to. We got it done and moved on to the next test.”

Bombardier did expand the scheduling of the aircraft by two years, from  2016 to 2018, which largely revolved around perfecting its wing design – now tied to the Global 7500’s Smooth Ride Technology. “One of the main facets of our philosophy of wing design is long wing, slender with leading-edge slats,” Masluch explains. “The way we design our wings makes them much more flexible than other aircraft manufacturers.”

The attention to wing and airframe design allowed the company in mid-2018 to extend its Global 7500 commitments to the 7,700 nautical mile range and a takeoff performance of 5,800 feet. “If your [customers are] the elite of business, people who are influencing the world economy, leaders of the world, you want a product that has absolutely no compromise,” says Masluch. “The only way to deliver something that has no compromise is to start from a clean sheet.”

The clean-sheet program also allowed Bombardier to make the Global 7500 both highly customizable and cost effective. “We have rethought how cabinets are designed and installed on the aircraft to get the highest quality, but also reduce the overall time it takes to build the aircraft,” Masluch says, describing a modular approach for interior completions. The fit and finish of major components are first made perfect on an interior installation test rig – a unique manufacturing process in the industry.

After an aircraft is produced in Toronto, it is flown to make measurements of the interior when pressurized, which then allows Bombardier to flex its interior test rig to millimetre deviations and produce an exact interior for a specific fuselage. “When the aircraft arrives in Montreal, all of the major components are ready to go into the exact deflection of the aircraft. That is where you save so much time on the plane and you are able to give customers something that is done right the first time,” Masluch says. “It is committing to the next 20, 30 years of building aircraft the right way.”

There are approximately 2,000 people at Bombardier who work on the Global 7500 from a design, assembly and completion perspective. Because the aircraft is built in Canada, Masluch explains another 1,000 people in Montreal and Greater Toronto support the program as third-party suppliers.

Bombardier has been working in parallel on two clean-sheet programs of this complexity and level of performance in the Global 7500 and CSeries. With the CSeries now under the majority control of Airbus, which renamed the aircraft series to A220, Bombardier is focusing on regional and business aviation aircraft. “The Global 7500 for Bombardier Business Aircraft – and for Bombardier in the broader sense – is really the Crown Jewel,” Masluch says, noting strategic growth from the Global series is expected in 2020 under full production conditions. “It is the aircraft that will lead the charge.”

Bombardier in mid-October reported its new Global 6500 and 5500, unveiled six months ago at EBACE, are progressing on schedule with 70 per cent of projected test hours complete. These aircraft are scheduled to enter service in 2019 with exclusive Rolls-Royce Pearl engines and a world-first application of Rockwell Collins’ EVS system. Leveraging short- and long-range infrared imaging with traditional HUD systems to create unprecedented approach visibility, this combined vision system will include a roadmap for integration on the Global 7500, currently using Rockwell Collins’ Pro Line Fusion avionics.

The Global 6500 and 5500 will also include the Nuage (Cloud, in English) seat. “A lot of the industrial design effort that went into the [7500] interior now gets translated into the Global 6500 and 5500,” Masluch says. “When we talk about designing the first new seat architecture in aviation in 30 years, it is really the most fundamental shift in how a seat is designed structurally.”

The Nuage is another Intellectual Property advantage driven from the Global 7500 clean-sheet design, which is measured well beyond 7,700 nautical miles and Mach 0.925. “We say the 7500 was designed around the passenger,” Masluch says. “Even looking at details like a flat-side ledge where esthetically we put in metal trim to punch up the look and feel, it becomes a utilitarian surface where you can put your glasses down, use it like an extension of a table… all of these types of touches make the aircraft completely different for customers versus just the performance attributes you read about in a brochure. That is how we have sealed our offering to the world as the more humanized travel experience.”