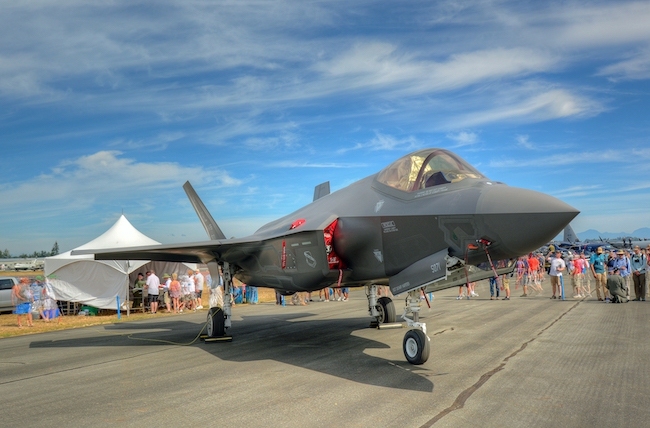 Held the Thursday and Friday before the Abbotsford International Air Show, the atmosphere inside Tradex is fuelled by the sounds (and occasional vibration) from aircraft as they arrive for the air show or get in their practise runs.

The importance of the aerospace sector to the economy was underscored by the significant presence of government officials from all three levels who were there to say they “get it” and want to work with the industry to make a good thing better. The City of Abbotsford, as the owner of the Abbotsford Airport (YXX) as well as the Tradex Centre, is working hard to make this a major aerospace hub, building on the long-existing anchor tenants Cascade Aviation, Conair and Chinook Helicopters.

The first day of the conference was split into two streams. The Supply Chain Forum, a series of presentations based on the AIAC consortium model and supply chain development, was followed by breakouts allowing for one-on-one discussion with representatives of Avcorp, Cascade Aerospace, KF Aerospace, MTU Maintenance Canada and Viking Air.

On the other side of the building, the CARIC session focused on piloting innovation and the opportunities that exist for partnering with Canadian universities and colleges, using their research expertise and facilities to collaborate on commercial projects.

The Thursday afternoon opened with a session on future business opportunities in India with the question “is it worth the cost?” Rahul Gangal of Roland Berger Strategy Consultants delivered a very insightful presentation from India via Skype. His short answer on doing business with India is that “the Indian market requires patience,” offering the analogy of preferred spectator sports as an indicator of various cultures appetite for patience.

Most North American sports (football, hockey, basketball) have short time frames, no more than an hour. But Europeans are willing to watch soccer for 90 minutes and even longer overtimes. Indians, however, are very much the opposite, with five-day cricket matches still in vogue. That’s a full five days, and more often than not, the match will end in a draw and yet everyone will go home happy.  Doing business in India can often mean you are just playing for a draw and you have to be satisfied with that.

A very diverse panel entitled “Business perspective on the Asia-Pacific region followed Gangal. The panel of aerospace professionals and government trade officials discussed their views and experiences on dealing with the rapidly growing Asia Pacific Region – China, Indonesia, Thailand, Vietnam and others. The message from all conveyed that it is absolutely necessary to understand market dynamics – as well as the culture – when dealing in these countries.

The questions you have to ask yourself before you take the first step is “can we compete in the market” and “do we have the skills.” Then, before you do anything, talk to the government offices here in Canada and overseas to take advantage of their local knowledge.

The message from the businesses that have been there and the government trade officials who are there on the ground is that Canadian business cannot go into any country in Asia and get a deal simply because they are from Canada. You have to understand the local people and their culture – it’s their country.

Day two of the conference saw corporate presentations from KF Aerospace president Tracy Medve, with an overview of the KF Aerospace story, which started 45 years ago with a one-door office in Kelowna, B.C. Bob Noble, Boeing’s vice president of supplier development, gave an overview of how important the supply chain is to Boeing and how it will be even more important in the coming years.

Noble was blunt in saying that Boeing hadn’t done the best job of managing its supply chain over the years, but that has changed and they are committed to working with their suppliers and the people who supply their suppliers as the global market for commercial aircraft shows no sign of slowing down. The reality is, as he pointed out, that while there may only be two major aircraft manufacturers with Boeing and Airbus, both of these companies are geared up to manufacture more than 50 per cent of the world’s commercial aircraft. While this may not be numerically possible, it gives them added punch for the competitive fuels.

Gregg Saretsky, president and CEO of Westjet, spoke to the future of air travel in Canada as an economic driver. The largest single impediment to the Canadian airline business is the cost of aviation infrastructure. In the United States, many of the costs associated with air travel such as security, are the responsibility of the federal government, unlike in Canada where these costs are borne directly by the airports and/or airlines and ultimately the travelling public.

Up to six million Canadians a year cross the border to the U.S. in search of lower air fares. Even if you factor in the costs of driving across the border and the extra time involved, people are still going to go where they think they are getting a better deal. Westjet is spreading its wings into the international market and while Saretsky acknowledged startup problems with the aircraft used on the London Gatwick routes, he did note that they have had minimal disruptions and the routes are at 95 per cent occupancy, especially impressive from YVR with Air Canada adding a second daily B777 and BA replacing its daily B777 with a the A380. Westjet will be the Canadian launch customer for Boeing’s next 737, which will be capable of flying Calgary-Hawaii routes.

Jim Quick, AIAC president and CEO, gave his views on working with the new federal government.  His message was short and to the point. If you want to be heard by this government, you have to speak their language: understand what the key issues are and stay on message. Quick was joined on stage by AIAC vice-presidents Mike Mueller and Taylor Briggs, who talked about the success of ADSE as a place where businesses and individuals could talk, with more than 160 business to business meetings conducted over two days.

The closing speaker was RCAF Commander, Lt. Gen. Michael Hood. His mission priorities are the defence of Canada and North America as well as Canada’s international obligations. He has to deliver on government policy in these areas using the RCAF we have, and not the RCAF we wish we had. Hood sees four key tenets to his mission: agility, as in the ability of the RCAF to deploy CF-18s to Libya within 24 hours when directed; integrated, as in all sections within the RCAF are integrated and have to grow and be maintained in relationship to each other; reach, the incredible area the RCAF is responsible for simply on the domestic front; and finally, power, as in protecting Canadian sovereignty at home and our interests abroad. Hood added that the air force isn’t aircraft or equipment – the RCAF is people. In closing, he noted that it was critical for the RCAF and business to fly in formation in order to succeed. “I need to understand your language as much as you need to understand ours, so we can both be successful. If we succeed, everyone succeeds.”

There was a clear message at ADSE that was repeated over and over across the two days. There is no secret for success and there are no shortcuts. Research is critical in everything you do. Know your project. Build networks – always be building networks Education forever, be a lifelong learner with formal and informal education. Finally, if you want to do business overseas, the first people you talk to are the federal (and possibly provincial) trade staff, both in Canada and overseas. ADSE 2016 was a success and 2107 looks to be even more exciting, as the 2017 CBAA convention and exhibition will be under the same roof with ADSE.