News
Shining the light on the Boundary Bay Airshow

What a difference a day can make when it comes to your local air show. The relentless sunshine and lack of rain that had “plagued” southwestern British Columbia for three months came to an end on Friday, July 24 as dark clouds and rain rolled in across the region. 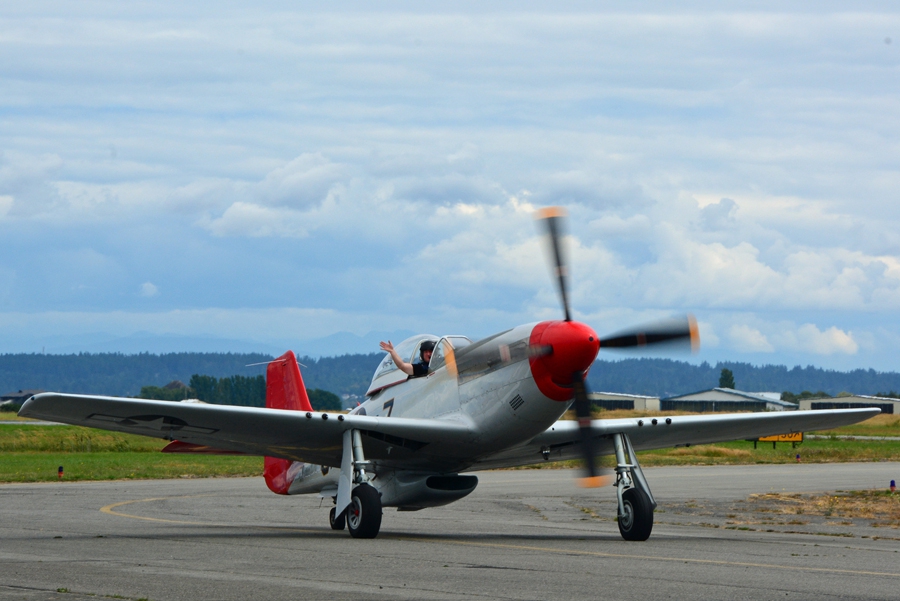 A P-51D Mustang takes a bow on the show line

While many fell to their knees in praise, organizers of the annual Boundary Bay Airshow were forced to grit their teeth and keep smiling as the air show’s practice day was washed out and Saturday’s forecast was for more of the same. Saturday dawned with blue skies and a backdrop of fluffy white clouds, and a cool breeze off the water to keep the temperature down.

The theme for this year’s air show was the 70th anniversary of the end of the Second World War. Boundary Bay was created as part of the Commonwealth Air Training Program, with the field officially opened in June, 1941 as Elementary Flight Training School Number 18 by Prime Minister Mackenzie King. After the attack on Pearl Harbour, the base became home for squadrons of Hurricanes and Curtis fighters as an operational base and finally finished out the war as a training base for Mitchells and Liberators.

A P-51D Mustang takes a bow on the show line

Today, Boundary Bay Airport (CZBB) is owned by the City of Delta and operated by Alpha Aviation. In 2014, CZBB was the 7th busiest airport in the country, based on aircraft movements, as this airport is the busiest training centre in the country. Heli-One operates the world’s largest helicopter maintenance facility, supporting CHC’s global operations, from CZBB. The annual air show has become a true community event, with widespread support from local businesses and an enthusiastic legion of volunteers. Shortly before noon, the snarl of radial engines returned to the air over Delta as six vintage Harvard trainers staged a race over the airfield, egged on by the Delta Concert Band belting out Tiger Rag, as a prelude to the show.

If you closed your eyes, you could well have imagined yourself transported back those 70 years. After the Canadian Forces Skyhawks dropped in with the Canadian and American flags (with the assistance of an RCAF CC-138 Twin Otter from 440 Squadron in Yellowknife), the show was under way. The star of this year’s show was the Madras Maiden, a B-17G from the Erickson Aircraft Collection in Oregon. The Maiden was accompanied by a P-51 Mustang and a FW-190 Focke-Wulf from the same collection. The Historic Flight Foundation of Everett, Wash. brought Grumpy, their B-25D Mitchell done up in RAF colours and a Grumman 8F8 Bearcat fighter.

Aerobatics were provided by Bud Granley and his son Ross in their Yak duo, as well as Super Dave Mathieson and Jon Melby reprising their roles from Discovery Channel’s Air Show. Super Dave and Jon added another layer to the afternoon by engaging in a series of match races with exotic cars. Super Dave’s MX2 handily defeated the McLaren, but Melby’s Pitts Special was nipped at the line in the rubber match with the Ford GT.

The show closed with another father and son duo, John and Richard Mrazek, in their Cold War Soviet-bloc jet trainers, L29 Delphins. Dark clouds were building by the end of the day, but the sun had shone over Boundary Bay for another year.