Features Operations
Sorting Through the Debris – the Crash of the A340

On Tuesday, August 2, I for one suddenly gained a whole new respect and admiration for the GTAA organization. 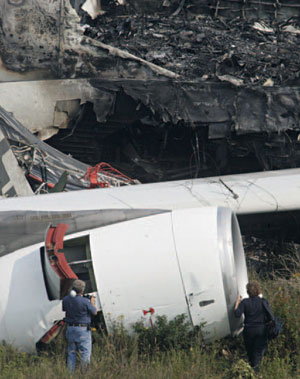 As anyone who works around Lester B. Pearson International Airport will
attest, the initials GTAA stand for a lot of things – and some of them
not very complimentary. For years since this ‘private sector’ body took
control of the airport, there have been changes to systems, new rules,
new charges and at some times incredibly bad relations between the
users and the airport operator. To be perfectly fair, the fault was not
always that of the airport authority. Flight operators by nature like
routine, repetitive processes for their business and daily activities.
Any change will always result in resistance before acceptance.

One
of the most interesting changes to the airport came soon after the
Greater Toronto Airports Authority assumed control, and involved the
fire and emergency services. At the time the GTAA came into control of
YYZ, fire services had been under reduction to the point where only
basic crews were on site at one main hall. Under the GTAA, this changed
– new halls being built, new strategic locations selected, new
equipment and a hiring/training program to ensure proper execution.

More
recently, some of us have had occasion to meet with the fire/safety
officials at YYZ and attend their briefings and procedures training.
Personally, I must admit to wondering privately what type of mind it
takes to imagine, yet alone come up with, the things they had us study
and prepare for. It seemed that these were people who lived in a
negative mental spirit and looked for the worst in all things. How
morbid!

On Tuesday, August 2, I for one suddenly gained a whole
new respect and admiration for the GTAA organization – and in
particular its emergency services team. At roughly 16:00 hrs on that
day, as the now well-known Air France A340 went off the end of runway
24L and into a ravine, all the training and doomsday crystal ball
gazing of the ER services sprang into life and in the process saved
lives – many of them. For the flight crew, it was amazing that all
passengers were off the aircraft in under two minutes, in spite of two
failed evacuation slides. As for the ground based team, to be on site
in under one minute is impressive to say the least – I guess someone
really knew what they were doing in locating the new fire halls where
they did.

To have only minor injuries from an aircraft accident
of this magnitude is stunning. Clearly a lot of things went as they
should and everything came together to make what could have been one of
this nation’s top aviation disasters, a story with a happy ending.
Kudos are due to the entire team! That boring and tedious ‘stuff’
everyone trained for suddenly paid off when needed.

What truly
amazes me – or perhaps it shouldn’t – is the activity of the consumer
media in all this (we at WINGS qualify as trade/technical media and
therefore are not in the same category).

The GTAA was extremely
accommodating and forthright with qualified and supportable
information. Through regular media updates, they dealt with known facts
and avoided sensationalist, speculative reporting. The media on the
other hand went into overdrive trying to assign blame and speculate on
what had or had not happened. Rather than wait, they seized the
opportunity to quote anyone with an opinion as an ‘aviation expert’. My
personal favourite was the ‘commercial airline captain’ on the CBC,
talking with Peter Mansbridge. He was from Montreal, speaking by
satellite feed to the studio, was not identified by airline or company
and spewed forth his ‘qualified’ rhetoric about how and why this had
happened. This is not reporting – it’s muckraking and it’s insensitive
– and a network such as the CBC should know better. However, each and
every time there is an aviation incident like this, the media seems to
suddenly produce their ‘expert speculator’ – rather than wait and
report proper details in a helpful and informative manner.

As
this is being written, my other favourites – the lawyers – are now
lining up and rattling the lawsuit sabre. In the simplest terms – Get
Real! Everyone is OK. Sometimes bad things just happen. Suing will not
change anything. And after all – they paid for a trip to Toronto and
got just that. They all arrived – albeit a bit shaken. I can only
assume that those looking to file suit are the same ones who have been
chatting to anyone that would listen about how unhappy they are with
Air France’s handling of them since the incident. What was it someone
once said – “It’s all about you, isn’t it?” Quite frankly, the
passengers from this flight owe a great deal of thanks to many people –
and maybe some actually do feel that way – we just don’t hear from them
much as it does not sell papers or look good on air. For those looking
to sue the airport authority in this matter, perhaps the GTAA should
bill each of them for their fair share of the emergency services
rendered?

At any rate, a tip of the hat to the good guys in this
scenario. Personally, I will never doubt your doom-andgloom outlook
again. It obviously has a real and effective purpose!