One person has died following a mid-air engine failure aboard a Southwest Airlines Boeing 737-700. Southwest flight 1380 was en route from La Guardia in New York to Dallas Love Field airport on the morning of April 17 and was diverted to Philadelphia International Airport (PIA) when the aircraft lost its left-side engine. From images of the aircraft on the tarmac, it is clear a window is blown out about 10 windows back from the front-edge of the engine's cowling.

In a press conference held before leaving for Philadelphia to help investigate the incident, Robert Sumwalt, chairman of the U.S. National Transportation Safety Board (NTSB), said, “The two-part question is… are we concerned this might be related to the event that happened a few years ago over the Gulf of Mexico. First and foremost, we want to look at this particular event and see what the factors are surrounding this.”

Sumwalt was referring to when an engine fell apart on a Southwest flight in 2016, baring similarities to the April 17 incident, which CNN Aviation Expert Justin Green describes as involving the same aircraft and engine. “In the [2016] failure, parts of the turbo fan I believe exited the engine and penetrated the fuselage and caused a depressurization on landing,” he said, adding, “You cannot speculate. This is an accident and we are going to know very soon what happened… Right now it is time for the investigators to go to work.”

Also speaking with CNN, Peter Goelz, former NTSB managing director expected investigators to initially focus on the fan blades inside the engine. “Most typically a fan blade fails because of a maintenance oversight, some sort of foundry failure. That there is the tiniest little anomaly that can grow with the enormous pressure that the speed of the rotating engine puts on it. You could have had a fatigue crack that was hard to determine where it was.”

Later in the day, after arriving at the scene, Sumwalt told reporters a preliminary examination of the aircraft revealed that one of the engine's 24 fan blades was missing. “This fan blade was broken right at the hub and our preliminary examination of this was that there’s evidence of metal fatigue where the blade separated.” He added that a piece of the engine's cowling was found in Bernville, Pennsylvania, about 70 miles northwest of the Philadelphia airport, and that investigators will also be looking for any possible relationships with what happened in 2016 over the Gulf of Mexico.

Flightradar24, a Swedish Internet-based service that shows real-time aircraft flight information, reports the 737-700 involved in the April 17 incident was delivered to Southwest Airlines in 2000 and that the aircraft is powered by two CFM56 engines. FlightRadar24 estimates the 737-700 descended from 31,684 feet to about 10,000 feet in a little over five minutes. The flight had 143 customers and five crewmembers onboard.

The flight crew is being praised for making the emergency landing in Philadelphia, which, according to the New York Post and other news outlets, was piloted by Tammie Jo Shults, 56. Shults, explains the Post, was one of the Navy’s first female fighter pilots and also among the first to pilot a supersonic F/A-18.

Previous statements from the airline informed the public of its emergency response measures and sympathies for those affected: “The entire Southwest Airlines Family is devastated and extends its deepest, heartfelt sympathy to the customers, employees, family members and loved ones affected by this tragic event. We have activated our emergency response team and are deploying every resource to support those affected by this tragedy.” 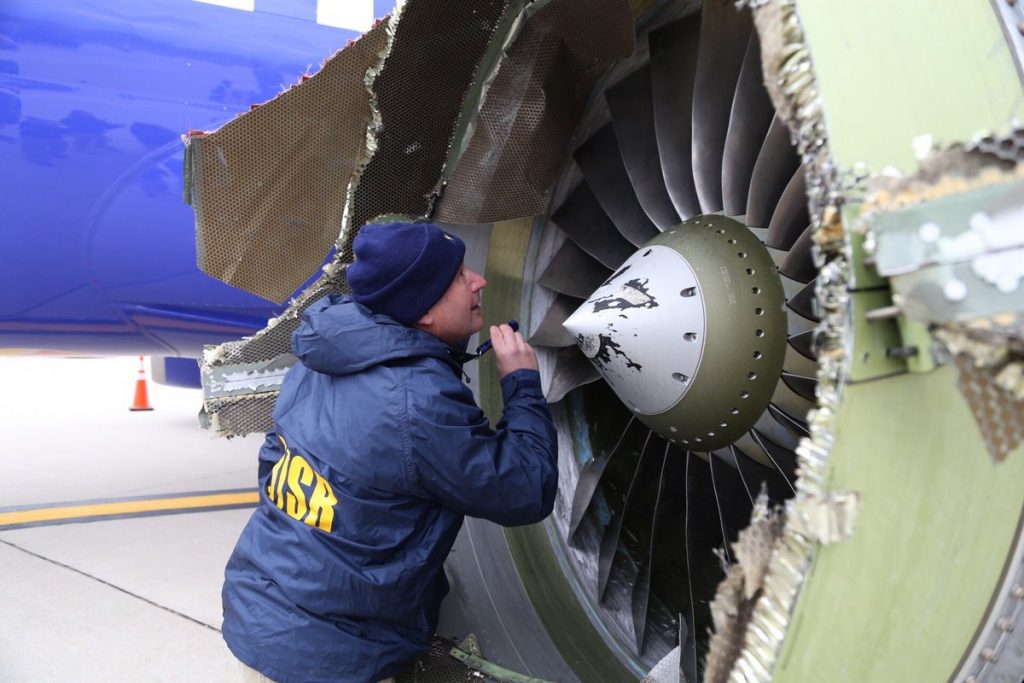