The Experimental Aircraft Association is so much more than hackers in a garage. 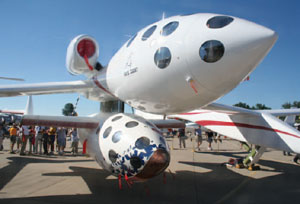 “SpaceShipOne and White Knight show where dreams of flight can lead us,
to a place where even the sky is not the limit. We are very proud that
those who led this achievement received inspiration through EAA and
want to share their accomplishment in Oshkosh, where the whole world
gathers to celebrate flight,” said Tom Poberezny, EAA President.

The
Experimental Aircraft Association is so much more than hackers in a
garage. Just over a century ago, brothers Orville and Wilbur first
succeeded in achieving heavier-than-air powered flight. And EAA
celebrated the Wright centennial in 2003. Some may have thought that
would be it for excitement for a while. But EAA members are always up
for a challenge. So last year, long-time member Burt Rutan, who hasn’t
missed an Oshkosh convention in 35 years, built a space ship – and used
it to win the $10-million Ansari X Prize.

SpaceShipOne, with its
launch carrier White Knight, made its only public appearance, arriving
at AirVenture 2005 in Oshkosh, Wisconsin on Monday, July 25 and staying
for the entire seven-day convention. It then departed for its new
permanent home at the National Air and Space Museum, in Washington, DC,
alongside the 1903 Wright Flyer, Lindbergh’s Spirit of St. Louis, and
the Bell X-1 (and a replica is under construction for the AirVenture
Museum in Oshkosh). If you made the pilgrimage this year, you will have
been up close and personal with the world’s first civil space ship.

Rutan
explained the Scaled Composites approach to space travel. Safety was
paramount if ‘space’ was to be ‘commercialized.’ He compared the
requirement for successful civil space flight as providing an
equivalent risk level as achieved by the early airlines, in the order
of 1 in 6,000 odds (today’s airline travel achieves 1 in 5 million odds
of incident). The choice of a smaller air-launched rocket was the major
response to this, much safer than a larger ground-launched rocket.
SpaceShipOne was designed for stability over a wide range and ability
for self-correction. The idea of ‘feathered re-entry,’ inspired by a
badminton shuttlecock, was also a key. Rutan reported that the
program’s biggest success was achieving supersonic flight, accomplished
December 17, 2003. But SpaceShipOne is just the first step. Where only
430 people have reached space in the past 40 years, Rutan sees 100,000
experiencing space in the first dozen years of civil space travel.

Rutan’s
genius and Paul Allen’s philanthropy won the X Prize. Enter the
entrepreneur, Sir Richard Branson, because the real story of AirVenture
2005 was not just the celebration of achieving civil space flight, it
was the announcement of a new civil space flight industry. Virgin
Galactic, under president Will Whitehorn, started selling tickets for
suborbital space flights at only $200,000. Keeping things relative, one
adventurer paid a Russian company $20 million for an orbital flight and
it has recently offered two tickets at $100 million each for a flight
to the moon. In comparison, Virgin Galactic space flights are in the
reach of many.

On July 26, Branson and Rutan announced the
launch of The SpaceShip Company to manufacture commercial space ships.
Of course Virgin Galactic is the launch customer, with an order valued
at $130 million, for five SpaceShipTwo spacecraft, a larger model for
seven passengers plus a crew of two (and, yes, they are accepting pilot
applications!). The first SpaceShipTwo is under construction at Rutan’s
Scaled Compositesin Mojave, California for certification before further
manufacturing is turned over to The SpaceShip Company (location not yet
announced).

A 200-mile flight reaching an altitude of 460,000
feet (140 kilometres) will cost you $200,000 (US dollars, of course).
Virgin Galactic estimates a market of 35,000 new astronauts over the
first ten years, on flights that could begin as early as 2008 (see
www.virgingalactic.com). This will only be a beginning, the
‘just-for-fun flights’ being like flying’s early barnstorming days. And
remember that home computers began for playing games. From there,
suborbital transportation is a real possibility, with flights from
Tokyo to London in a couple of hours. Full orbital flights are another
quantum leap for the civil industry that may be some years off, but the
future has now been opened to vacations in space and trips to the moon,
perhaps in our children’s lifetimes.

The Q & A session of
the presentation raised the issue of certification and regulation.
Rutan explained the biggest problem was getting the FAA to recognize
SpaceShipOne was an airplane and to deal with the civil people versus
the rocket people who had a more bureaucratic and risk-averse mindset;
however, he said, the bureaucrats work for us! (and he did get his
launch licence one and a half days before the flight). Whitehorn
reported being visited by UK bureaucrats wanting to get in on a space
program! As for environmental issues, Branson noted that it would take
18,000 SpaceShipOne flights to equal the impact of one Shuttle launch.

The
last word goes to Whitehorn, who spoke movingly of the need for passion
in our pursuits. Those of us in our 40s and 50s remember the excitement
and passion of the Apollo program, when space travel was a future
possibility for all of us. But many young people today think that only
robots will explore space. Somewhere, we have lost our confidence. On
the same note, he challenged the mostly American audience to avoid the
temptation of withdrawal and protectionism, to open their hearts to the
passion of flight and its new frontier of civil space travel (and
received a standing ovation). The future is now, and the sky is not the
limit.