Le Bourget shows the world: The international aerospace industry is back on track. 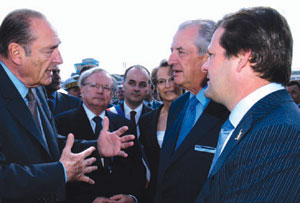 On June 13, French president Jacques Chirac officially opened the 46th
biennial Paris International Air Show at Le Bourget airport, just north
of the city. By the time all was said and done a quarter million
visitors had passed through les portes d’entrées and orders worth well
over US $50 billion had been generated. (Figures at Wings magazine
press time).

An
air of optimism prevailed throughout the week with exhibitors and
participants upbeat and positive. The show reflected what many are
calling the resurgence of the international aerospace industry.

The
harbinger of this renewed vigour was the first public display flight by
Airbus SAS’s of its A380 – the world’s largest aircraft. Throngs of
visitors stood in awe as the big bird soared gracefully into the Paris
sky.

But the excitement surrounding the A380 was only part of
the Airbus story. The giant company also took away orders worth a
mindboggling US $33.5 billion – representing about 320 planes.

The
show saw a slew of jet orders from developing markets such as India,
China and the Middle East. With just one order, new Indian lowcost
carrier IndiGo agreed to purchase 100 A320 aircraft. (List price-US $6
billion). By the end of the show Airbus also had commitments for 125 of
their new A350 airliner and five A380s, which were ordered by
Kingfisher Airlines of India.

Airbus’s major competitor, Boeing,
likewise stood out from the crowd. The US company had strong sales
reported to be around the US $15 billion mark. International Lease
Finance Corp. announced a firm order from Boeing for 20 Next-
Generation 737-700s/-800s, six 777-300ERs and two 777- 200ERs, together
valued at nearly $2.9 billion at list prices. Boeing also reached an
agreement with Air Europa for the purchase of up to 30 Boeing
Next-Generation 737s.

All
of this activity augurs well for the international aerospace industry.
The global demand for aircraft that was demonstrated should drive not
only Airbus and Boeing, but also dozens of other manufacturers, such as
Bombardier and Embraer and, of course, all of their international
suppliers.