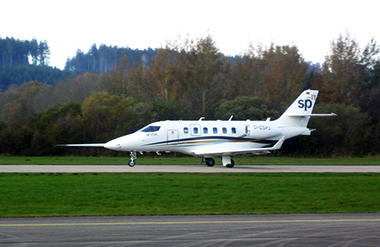 The aircraft took off at 9:28 am local time from the company’s airfield at Tussenhausen-Mattsies, Germany, where it is being developed and built. The flight testing included basic systems checkouts, stability and control evaluation and a first landing at the Allgäu Airport in Memmingen as planned. The aircraft returned to the company’s airfield after the second flight. Total flying time was 1 hour and 26 minutes. At the controls were Chief Test Pilot Tore Reimers and Test Pilot Peter Weger. Test aircraft No. 3 is flying most of the systems that will be installed in the fully conforming series production aircraft.

First flight of test aircraft No. 3 was accomplished following an intensive period of comprehensive ground testing of systems such as fuel, engines, hydraulics, landing gear and avionics a well as taxiing tests. First taxiing trials were carried out in late September, just prior to the NBAA Show.

Aircraft No. 3 enters the flight test program alongside the first test aircraft D-CSPN. Niall Olver, Chief Executive of Grob Aerospace has confirmed the company’s commitment to add a further three aircraft to support the flight test program. Production of the fourth test aircraft is already well under way, scheduled to join the program in Q4 2007. In due course this will be followed by the first two series production aircraft, both of which will join the program for functional reliability testing, and featuring the full interior designed by Porsche Design Studio.

“We are delighted to have achieved this milestone in the program today with first flight of P3. We are confidently on the road to European and US certification” said Niall Olver.

With the airframe fatigue test in preparation a major milestone toward the certification process of the spn is imminent. Fatigue testing will be undertaken in-house, scheduled to start in Q4 2007. Testing will simulate 84,000 flight hours and 51,000 landings and pressurization cycles to a minimum of 28,000 hours’ and 17,000 landings.

It is already well understood in the market that ongoing maintenance of the spn is simplified owing to the aircraft’s fully carbon fiber construction, thereby virtually avoiding fatigue or corrosion problems that affect aircraft built of metal. However, with the goal of further simplifying maintainability, Grob Aerospace has relocated certain systems into the wing fairing, including the oxygen system, single point pressure fuelling and some electrical power distribution. This equipment will be easily accessible through large access panels; designs motivated by the positive reaction from future maintainers and operators to the large panels, which allow easy access to spn avionics and hydraulics systems in the forward nose compartment.

Production spec equipment installed for the first time on the third test aircraft is the landing gear, for which a series of drop tests to confirm strength and energy absorption is currently carried out. Developed by industry leader Liebherr Aerospace, the main trailing link landing gear as well as the nose landing gear, boasts a very robust design, allowing the spn to land on unprepared airfields. Sitting higher than most aircraft in this class, the extra clearance provided by the landing gear ensures the aircraft is less exposed to debris, stability enhanced by carbon brakes powered by a hydraulic braking system with anti-skid functionality.

The spn offers large speed-brakes and ground spoilers which, together with the large Fowler flaps, are designed to provide excellent landing characteristics, even on very short and/or unpaved runways traditionally reserved for turboprops.

The spn will also be certified for single pilot operation, and is equipped with Honeywell’s integrated all glass cockpit. Two rear-mounted FADEC controlled Williams FJ44-3A engines deliver 2,800 lbs (1,270 kg) of thrust each.