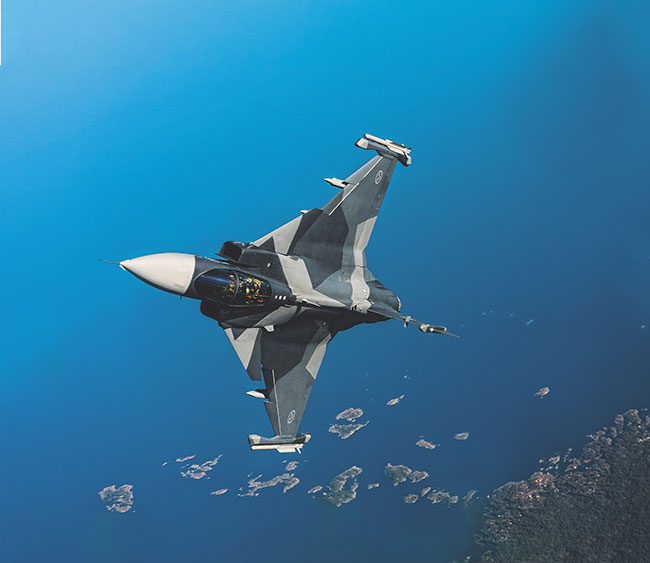 OTTAWA — Swedish fighter-jet maker Saab is voicing complaints about Ottawa’s negotiations with Washington and U.S. defence giant Lockheed Martin to buy the F-35, saying such talks weren’t supposed to be part of the process.

The federal Liberal government announced in March that the F-35 had beaten out Saab’s Gripen in the $19-billion competition to buy 88 new fighter jets to replace Canada’s aging CF-18s.

Ministers subsequently launched final negotiations with the U.S. government and F-35 maker Lockheed Martin to nail down the cost, delivery schedule, and economic benefits for Canada.

They also emphasized that the deal for the F-35 is not finalized, with the government retaining the option to talk with Saab should discussions with Lockheed Martin stall.

Nonetheless, during a parliamentary committee appearance this week, Saab Canada president Simon Carroll complained that there shouldn’t be anything to negotiate at this stage in the game.

“Recent statements by the government indicated Canada is negotiating cost, delivery schedule and economic benefits with our competitor,” Carroll told the House of Commons committee on government operations and estimates on Thursday.

“There should be no negotiation on these critical elements. These elements of the bidders’ response were to be committed to and then evaluated as part of the competitive process.”

Carroll later accused the government of not following the process for running the competition that was laid out to Saab.

“Canada’s decision to move into the finalization phase to negotiate with the competitor to determine cost, benefits and deliveries that are mandatory requirements as part of the program are inconsistent with the (fighter jet) procurement guidance that we were given.”

In a statement on Friday, the federal department responsible for leading the competition and negotiations pushed back, saying it is following the steps that were laid out to companies when they were asked to submit their bids during the competition.

“The finalization phase is still ongoing and is being executed as laid out in the bid solicitation documents,” Public Services and Procurement Canada spokeswoman Michele LaRose said.

“During this phase, the top-ranked bidder must successfully demonstrate that a resulting contract would meet all of Canada’s requirements and outcomes, including value for money, flexibility, protection against risks, and performance and delivery assurances.”

Lockheed Martin declined to comment, saying it would be inappropriate given the ongoing negotiations.

When the government announced the launch of negotiations for the F-35 in March, Defence Minister Anita Anand described the competition as “rigorous.” Yet a senior procurement official indicated the scope of the negotiations would nonetheless be broad.

“So there are still quite a few parameters and variables to bring home with the company.”

As for the anticipated $19-billion cost, which the government first announced in 2017, Anand said it would be “further refined.”

And while officials at the time expressed optimism that a deal would be finalized by the end of the year, and the first F-35 delivered by 2025, Lockheed has said negotiations could drag into next year, with the first jet delivered in 2026 at the earliest.

Retired colonel Alan Stephenson, who now works as a defence analyst for the Canadian Global Affairs Institute, said talks between Ottawa, Washington and Lockheed Martin have been “opaque,” with little in the way of updates or details.

But he said that if Saab was truly concerned about the process, there are legal avenues such as the Federal Court and Canadian International Trade Tribunal with which it can challenge the results of the competition.

“If Saab is challenging this, then they have the means to contest it formally,” Stephenson said. “So, all in all, they’re playing a bit of a game here. And if they truly believe that they’ve been hard done by, then they can contest it.”

Saab spokeswoman Sierra Fullerton did not respond to a question on Friday about whether the company had taken, or was planning to take, legal action.

“As stated in our appearance yesterday, Saab provided firm commitments to Canada on pricing, delivery schedule and economic benefits to Canadian industry. We stand behind that offer,” she said in an email.

“Saab participated in the committee as we are dedicated to serving the Canadian government and Armed Forces, and felt that we could contribute to the study of air defence procurement projects.”

As for why details such as cost and delivery schedule weren’t included in the F-35’s bid, Stephenson said purchasing military equipment is much more complex than items like pencils, given various factors that need to be considered.

For the F-35, that includes the fact Canada is only one of several countries that plan to buy the aircraft. That means both sides need to figure out when the first of Canada’s planes will come off the production line, which influences cost.

Carleton University professor Philippe Lagasse, who served as a government-appointed monitor of military procurement projects, said the fact Saab remains in the running while those details are being ironed out is an improvement over previous purchases.

“My sense is that it’s a lesson learned from past procurements,” he said. “If all this is left until after a winner is announced, Canada loses a great deal of leverage.”