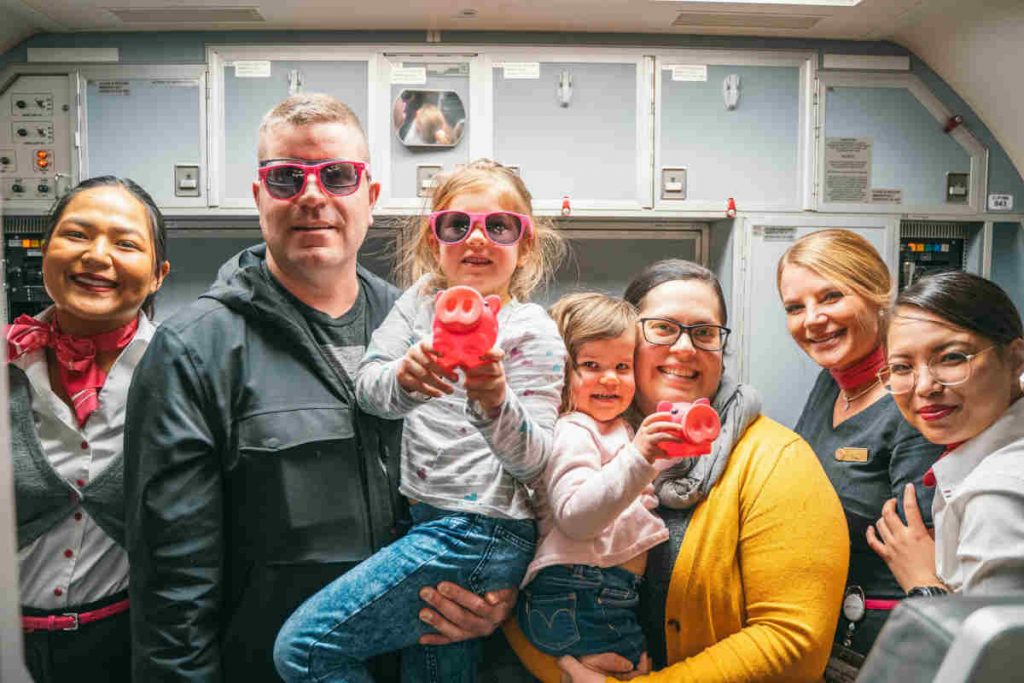 To celebrate its two millionth traveller milestone, Swoop surprised unsuspecting travellers with giveaways an a January 4 flight from Edmonton to Las Vegas, including Travis Pickering who was travelling with his family on the flight and won round-trip flights for two anywhere Swoop flies. (Photo: CNW Group/Swoop)

From an initial fleet of three aircraft and a network of five Canadian cities, the airline now holds nine Boeing 737-800 aircraft and service to 20 destinations throughout Canada, the U.S., Mexico and the Caribbean. Swoop’s network now serves 14 domestic, 10 transborder and four international markets. The airline’s new 2020 summer schedule is planned to increase Swoop’s frequency to 328 ultra-low fare weekly flights.

To commemorate its two-million-passenger milestone, Swoop presented an unsuspecting guest with a round-trip flight to anywhere Swoop flies. The winner, Travis Pickering, who was travelling with his wife and two children, received the prize during the flight.

“Reaching this milestone of having flown two million travellers in this short timeframe affirms the need for Canadians to have affordable air travel options,” said Shane Workman, head of flight operations, Swoop. “Swoop is humbled for the opportunity to be part of so many Canadians’ travel plans. Whether they were travelling to visit family, take a vacation or for business, we are honoured that Swoop has been the airline of choice for two million travellers.”

In addition to the round-trip flight giveaway, Swoop also provided all travellers on the flight from Edmonton to Las Vegas with cookies, champagne and Swoop swag.

“Congratulations to Swoop on its great milestone. We’re happy that Edmonton International Airport can share in this achievement,” said Tom Ruth, president and CEO for EIA. “We look forward to Swoop’s continued success offering more flights to more places for our passengers.”

Chris Jones, chief marketing officer for McCarran International Airport, notes the impact Swoop has made on the Las Vegas airport, to where Swoop routes began in 2018. “In 2019, we celebrated serving 50 million passengers for the first time in a single year thanks in part to Swoop passengers,” he said. “We are honoured to return the favor by helping to welcome its 2 millionth passenger.”