News
Talk about your Lucky Duck!

A touching human interest story about a very special member of the Skyservice Business Aviation family at the Esso Avitat-YYC.


William Shakespeare once wrote that “nature teaches beasts to know their friends”, and that certainly seems true of one young duckling who waddled up to the Esso Avitat – YYC after surviving a traffic collision that claimed the rest of his family in July of 2008. There he found refuge with Bob Luedeman; crew chief for Skyservice Business Aviation; whose kind heart has aided many an injured bird from robins to seagulls. The duckling, nicknamed “Lucky” (Peep Peep to his friends) became a fast friend of Bob’s, to a point even where Bob literally gave up his summer in order to rear this tiny being. 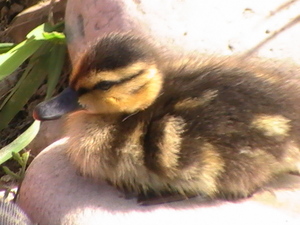 From the start Bob never forgot that this creature would one day return to the wild.  With this in mind, Bob would take Lucky to the Bow River, Fish Creek or Lake McGregor on his days off, getting Lucky used to the wild world that would once again become his home.  Bob was a masterful teacher, teaching Lucky how to swim (so proud was Lucky that he often swam literal circles around Bob!). Bob would often bring Lucky to the Avitat for a change of pace where he would entertain the crew by chasing and hunting grasshoppers in the cooler evenings.  As with many “parents” leaving a youngster to go to work is difficult, so Bob enlisted the help of his mother to provide “babysitting” so the little one would have a safe place.

The day finally arrived when all of the learning and training was complete and Bob had to release Lucky into the wild.  Bob did his best to find the most suitable place for the young Mallard to call home. After securing the best nesting site, Bob left, only to return periodically to make sure young Lucky was safe.  During these brief encounters, Bob would stand by and watch as Lucky would show off all the new things he had learned while under Bob’s care. On one of his last visits Bob even had the opportunity to witness his young charge in flight.  “It touched me deeply; it was amazing to be a part of this!” 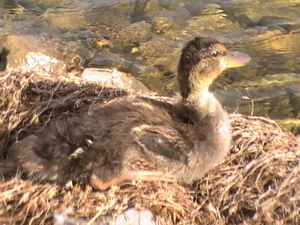 Though Lucky is safe and happy in his new habitat, Bob’s hope is that next year the young duck who found refuge at the Esso Avitat will return, only this time with a young family of his own in tow.