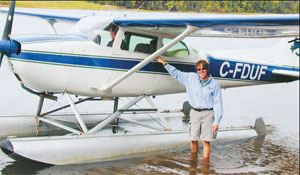 Imagine spending your working days flying over the incredibly beautiful
vistas of Prince Edward Island, with its red sand beaches and
shimmering green fields. That’s the life Tartan Air owner and pilot
Mark Coffin made for himself when he founded this company four years
ago. Based at the PEI seaside community of Murray River, Coffin decided
to trade in the grind of a corporate employee – “I was flying cargo
overnight from Oshawa to the US” – for the more pleasant life of a
seaplane entrepreneur. Today, he makes his living from his 1972-vintage
Cessna 172 seaplane (registry CFDUF), flying tourists around the
island, and transporting charter, corporate and government passengers
around the Maritimes in his off-times.

THE RIGHT PLACE
Flying
cargo in venerable Beech 18s and DC-3s gave Coffin plenty of time to
plan Tartan Air. “I wanted to do something that brought me back to the
Maritimes, where I grew up,” he says. “Besides, no one had ever tried
running a floatplane sightseeingcharter service on PEI. It had been
tried once in Halifax but failed due to the miserable weather that
often socks in the area with fog. In contrast, the fog over PEI always
clears by 9 a.m.”

To catch the attention of potential clients,
Mark Coffin chose the picturesque harbour at Murray River, just 30
minutes’ drive from Charlottetown. Famous for uncrowded beaches,
offshore fishing and the restored Cape Bear lighthouse, Murray River
was home to a Marconi wireless radio station between 1905 and 1922.
Local lore says that in the early morning hours of April 15, 1912,
operator Thomas Barlett received the S.O.S. distress call from the
Titanic. Clearly, this is a community with touristattracting charm to
spare and for Tartan Air to market.

THE LIFE OF A SIGHTSEEING OPERATOR
With
his meticulously maintained Cessna 172 seaplane parked prominently at
the water’s edge, Coffin woos passing tourists to take an overhead
gander at PEI. The 172 is big enough to carry two adult passengers, or
one adult and two children. “I charge $190 for an hour of sightseeing,”
he says. “That’s enough time to see about a third of the Island and the
12.9-km long Confederation Bridge, which links PEI to the mainland.”
70% of his tourist trade is pre-booked, while the other 30% is
‘walk-in’.

Although he flies the same circuit for all his
sightseeing customers, Coffin never tires of his work. “Anytime I get
to see a pod of whales offshore, it’s a great day for me,” he says. To
maximize the view while ensuring passenger safety, Tartan Air flies its
tours at 500 feet.

Then there’s the charter work: “We have the
good fortune to be an hour’s flying time away from Halifax, Sydney,
Moncton and the other major cities in Nova Scotia and New Brunswick,”
Coffin says. “As a result, we get a lot of charter business from
corporate and government clients alike, which is why I recently
acquired a wheeled Piper Seneca 2.”

STAYING ALIVE
As a
corporate pilot living on a salary, Coffin wasn’t exactly swimming in
cash when he founded Tartan Air. But he did have one thing going for
him – he already owned the Cessna 172 that is the mainstay of Tartan
Air’s fleet. For everything else, he made do with as little as possible.

“We
began business on a shoestring, just me serving as pilot on the 172,
and an office back in Murray River which I paid someone to run,” he
says. “As the business grew, I acquired a second pilot by purchasing
the Tradewinds Flight Centre in Charlottetown, where he serves as chief
instructor.”

In addition, Coffin turned the lack of a
maintenance and repair station in Murray River to an advantage. “Today,
we run our own AMO from Charlottetown which not only services our
planes but eight other private aircraft too,” he says. This delivers
some more money to Tartan Air’s bottom line.

Finally, Tartan Air
offers a floatplane endorsement course for aspiring seaplane pilots.
Running seven hours, it covers docking, taxiing, sailing, rough water
operations, glassywater operations, crosswinds and normal operations,
plus ocean environment flying skills. “We conduct our courses so that
they take us all over Prince Edward Island, giving the student the
greatest variety of different situations and conditions.” “We are also
only 20 minutes from Cape Breton and its many freshwater lakes and
bays.”

CHALLENGES
One would think that attracting
customers would be Tartan Air’s biggest challenge. But it wasn’t; what
really gave Coffin headaches was “getting the necessary permissions to
fly from all relevant levels of government,” he says. “There were a lot
of regulatory hurdles to deal with, because Transport Canada likes its
manuals just so. Plus we had to get approval to use the docks at
Charlottetown and Murray River.”

Tartan Air has put its
regulatory hassles behind it. However, the corrosiveness of the sea
remains a constant challenge for the company. “The salt content of the
water here is very high,” Coffin explains. “As a result, we take the
172 out of the ocean at the end of each day, then shampoo and rinse her
to get the salt off. But that’s not all; I have to keep a sharp eye out
for corrosion occurring in all kinds of places. You wouldn’t think the
sea spray would get into a seaplane’s inner nooks and crannies, but it
does!”

THE GOOD LIFE
Running his own sightseeing/ charter
service ensures that Coffin doesn’t get much time off. There’s always
something to do, be it flying tourists around the island, ferrying
charter passengers to a Maritime dropoff, or teaching students how to
master the art of seaplane takeoffs and landings.

This said,
Coffin couldn’t imagine making a living any other way. “I’m no longer
flying freight in the dead of night for somebody else,” he tells Wings.
“I’m doing what I love to do, and working for myself. It doesn’t get
any better than this!”