Older commercial aircraft can have a place of pride when airlines have finished with them. 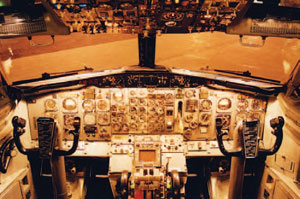 Falconbridge has long held a reputation for corporate aviation
operation in Canada. One of the country’s oldest mining firms,
Falconbridge is a leading producer of nickel, copper, cobalt and
platinum group metals. It has been unique in it’s application of the
‘corporate shuttle’ concept – combined with just-in-time delivery of
parts and support supplies – all using an aircraft owned and operated
by the company. The aircraft in question was, for a long time, a Boeing
737-210C – the ‘C’ standing for combi. Built in 1968, the unique thing
about this aircraft was that it incorporated a passenger cabin aft with
seating for 57 and a large, upward opening cargo door forward of the
aircraft centre with room for three aviation cargo pallets. And so, for
several years, this distinctive corporate aircraft departed from its
YYZ maintenance base, taking staff and goods to the company mine in
Raglan, Quebec. As Bob Liershaft, director of flight operations, said:
“While this may have been an old commercial aircraft, we flew and
maintained it like a corporate one and invested time and money well
beyond what many commercial airlines would have.”

THE DECISION TO CHANGE
Like
all aircraft, the time comes when upgrades and required modifications
(along with the recent stream of DRVSM and TCAS/TAWS NPAs) catch up to
its older airframe. At this point, serious consideration must be given
to either spending additional money to maintain safety and operational
effectiveness or trading off for something else. In this particular
case, Boeing had issued an AD on older 737s like that will come into
effect in two years and could cost several million dollars. For
Falconbridge, as much as they loved their aircraft, they knew this day
was coming.

FINDING A REPLACEMENT
Liershaft had been
looking for some time for an appropriate replacement aircraft. Last
year that finally happened and a much newer 737 combi was located that
would fit the requirement – with a little work here and there.The new
aircraft was built in 1979 and is a 200 (Advanced) model. This aircraft
came from the factory with a large cargo door. One of the key
advantages to the newer Boeing over the older one is that the bulkhead
between the passenger and cargo compartments is now moveable. This
means that it can accommodate three pallets and 60 passengers or be
reconfigured to handle up to 76 passengers and two pallets. This
flexibility is a key factor in the use of this aircraft and its
corporate/cargo role. As Liershaft said, “Falconbridge has the first
BBJ in Canada – that is, a Boeing Bush Jet.”

EXTREME MAKEOVER
The
job of taking the new combi and putting it into the trim and finish
expected by Falconbridge was given to Kelowna Flightcraft (KFC) at its
Hamilton, Ontario facility. Said Liershaft: “We were looking for a
top-quality, turnkey job that would allow us to focus our energies on
flight operations of the current aircraft and have a smooth transition
into the new one with as little upset or disruption as possible. KFC
built us a team and ultimately an aircraft that would ensure just
that.” The project involved a complete strip of all paint and interior,
new engines, the addition of hush kits and gravel kits and a full new
avionics suite. It also features one of the first installations of the
AvAero Fuel Mizer for Boeing 737-200 aircraft.

FUEL MIZER MODIFICATION
According
to AvAero, the Fuel Mizer modification does not require structural
alterations. There are no systems maintenance nor operational changes.
By changing specific parts and repositioning certain wing flight
controls, AvAero is able to offer a modification that can be installed
in 200-250 man-hours and in FAAapproved flight tests has shown an
average fuel saving of more than four per cent.

A NEW INTERIOR
The
new interior was crafted by Impact Aero and includes all-leather
seating surfaces and new carpets. As an added corporate treat, the
distinctive Falconbridge logo was embossed on the material on the
bulkhead separating the cargo and passenger compartments. Other
noticeable details include the logo on overhead baggage bins and the
comfortable seat pitch. Every cabin detail has been considered and
incorporated with the company’s needs and passenger comfort and safety
in mind.

As part of the new interior, Impact Aero also installed
a premium insulation package that reduces noise levels by up to 7 db in
the cabin, saved over 600 pounds in weight and improved handling of
highaltitude, cold-temperature problems.

THE AVIONICS UPGRADE
One
of the key performance enhancements to this 737 is with the avionics.
Mid- Canada Mod Center (MC2) has been supporting the needs of
Falconbridge for many years and was given the call to work with the KFC
team on getting the aircraft up to par. Bill Arsenault is
vice-president of MC2. Discussing the 737 project, Arsenault pointed
out that “as is usually the case in a project of this magnitude, the
process began almost a year before things actually got started with a
fairly off-thecuff remark from Bob stating, ‘We’re looking at buying a
new aircraft and would like to make the avionics more efficient and
modern’.”

The final avionics package evolved dramatically from,
“I think that we need newer control heads and flight management
systems,” to what was finally installed. Said Arsenault, “this 737
project was very dynamic in nature with some of the choices not getting
finalized until well into the project.”

Planning for the new
front office of the aircraft took place over many meetings with
Liershaft, phone calls to the avionics OEMs, and included some visits
with working demos. From this, a more-orless final configuration was
agreed to weeks before the project started. In the end, what started
out as a minor retrofit evolved into a project that replaced all of the
avionics except for the 2 Collins Flight Director Systems and the
Honeywell SP-77 Autopilot System.

EXISTING EQUIPMENT REMOVED
The
existing standard Boeing 737-200 suite of avionics was a fairly plain
system of Nav/Com DME and Audio system built to support basic commuter
traffic. In the evolution of this particular aircraft, low-cost GPS
systems were added along with TCAS to meet changing regulations. The
Air Data systems were also original and did not meet RVSM
specifications.

The switching and reversionary
modes for this system were either very rudimentary or nonexistent. At
the very best, one could switch the pilot’s instruments to the #2
vertical gyro in case of a #1 failure.