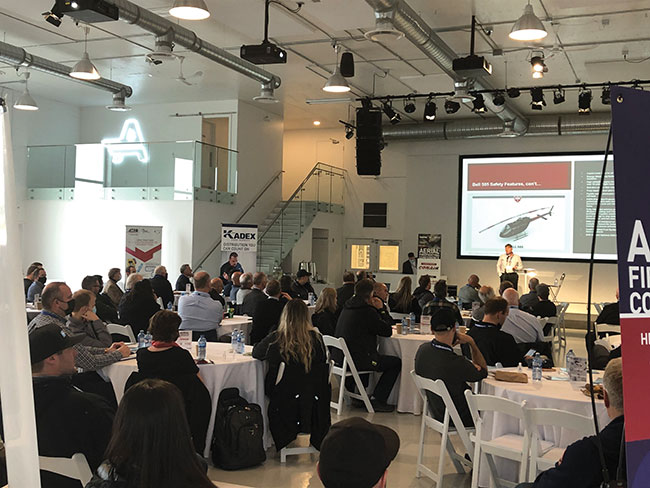 The sold-out Aerial Firefighting Conference at YXX took place in the hangar of Airside Event Spaces with a Static Display on the ramp of Andre’s Welding. Photos: Jon Riobinson, Mena Miu

On October 26, Wings and Helicopters hosted their first in-person conference in nearly two years, since the start of the Covid-19 pandemic, to focus on another critical economic and health issue facing the world, the unprecedented growth in devastating wildfires. After a wet summer in Canada in 2020, this year’s fire season ushered in enormous damage primarily on the West Coast, highlighted by the Lytton Fire that caused the death of two people and destroyed around 90 per cent of the small BC town. Just days before it was engulfed in flames, Lytton made headlines for recording Canada’s highest-ever temperature of 49.6 C (121.3 F).

Jeff Berry of Conair Group opened up the second annual Aerial Firefighting Conference with a presentation slide that simply read, Wildfires Have Changed. He continued to describe the impact of climate change in relation to the critical aviation-led management of wildfires, which Conair translates as actively changing its response: To anticipate future needs, adapt with new tools and act swiftly with precision. Headquartered at Abbotsford International, YXX, where the one-day conference took place, Conair over its 50-plus year history has modified more than 175 individual aircraft across 15 types for aerial firefighting. One of its ground-breaking Dash 8 Q400AT airtankers sat just metres away from the conference sessions, taking place inside Airside Event Spaces, on the ramp of Andre’s Welding and Machining as part of a Static Display. The ramp also included a Fire Boss Airbus 332L1 Super Puma brought in by Coldstream Helicopters and a Bell 407GXi brought in by White Saddle Air.

Berry described how Western Canada is leading the world in the advancement of aerial firefighting technology and strategy, which is highlighted by Conair’s Training + Tactics Centre and its new Mission Training System. Mark Baird described these advances to the crowd as the company responds to the need for training more aerial firefighting pilots and increasing skill levels to create safer missions. He explains the Training + Tactics Centre is the only such facility in the world, housing an AVRO RJ85 Level D FFS and an AT802 Level 5 FTD. The new Mission Training System will mimic the complex aerial arena often experienced over a wildfire, with Bird Dog and amphibious aircraft flying together simultaneously over a virtual fire. 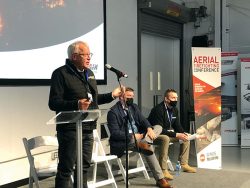 Jeff Berry, Vice President of Business Development of Conair Group, opens up the Aerial Firefighting Conference by describing the increasing importance for Canadian aviation to continue its lead in combating wildfires.

Dan Seroussi, Director of Programs with Viking Air Limited, then discussed plans to develop the Twin Otter Fire Attack System, based on a contract announced in August 2021 with PAL Aerospace. He described how Viking Air, along with its parent company, Longview Aviation Capital, is the world’s most involved aircraft OEM in the aerial firefighting sector. Seroussi noted, however, that many companies or governments may not have access to funding needed to renew fleets or to specialize platforms. This is the primary reason for empowering the existing DHC-6 300 and 400 fleet, accounting for approximately 555 aircraft worldwide (424 Twin Otter 300s and 131 Twin Otter 400s manufactured by Viking Air since 2011). He walked attendees through a range or proprietary costs and technological assessments of the Twin Otter Fire Attack System, with A-kit and removable B-kit modifications expected to be certified by July 2022.