While most of our recent coverage of the airline industry has focused on the trans-Atlantic market in summer and southern destinations in winter, the Canada-China/Hong Kong market is also showing signs of heating up with new entrants and added capacity. 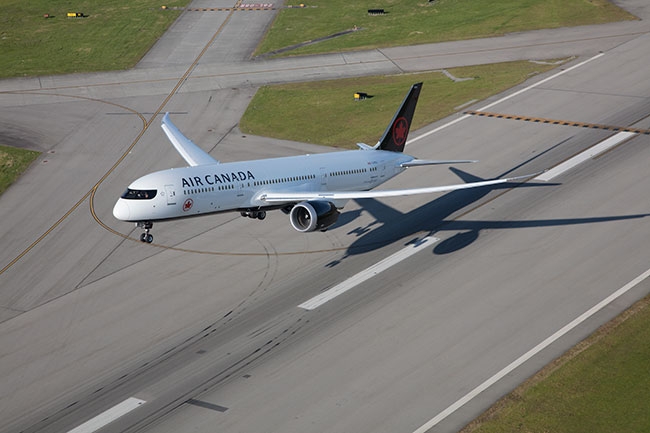 Comparing the same peak August week in 2016 to 2017, the number of weekly departures from Montreal, Toronto and Vancouver to all points in China/Hong Kong was 161, up from 128 last year.

The number of overall seats is up 23.3 per cent. Air China (plus 43 per cent) and China Southern (plus 48 per cent) show the largest absolute increases in seats. Air Canada, which remains the biggest single carrier from Canada to China with 36 per cent seat share, is increasing its capacity by just over 10 per cent, according to a National Bank Financial report by Cameron Doerksen.

Vancouver is the biggest beneficiary of new connections to China, with 10 different airlines offering 104 weekly flights between Canada and airports in mainland China, Hong Kong and Taiwan. In fact, Vancouver had the second most weekly departures to China (92) of any major airport in North America after LAX with 121. Toronto is no slouch, with 54 weekly departures to China, which is more than Chicago. In addition, Toronto and Vancouver have the highest year-to-year percentage growth in capacity of any of the major North American hubs, Doerksen points out.

Visits to Canada from China have been steadily increasing. According to Statistics Canada, the number of visitors to Canada from mainland China was up 22.2 per cent between 2015 and 2016. And while there is no breakdown between business and leisure travel, rising housing prices in Vancouver and Toronto have been driven in part from foreign investment, much of which stems from Chinese nationals.

Chinese companies have also invested heavily in Canada in recent years. In 2016, China made direct investments in Canada totalling $20.6 billion, up 70 per cent from 2010 levels. China is also Canada’s second largest merchandise trading partner and the Canadian government is said to be pursuing a bilateral trade agreement with China. Tighter economic ties between the two countries should help sustain and grow travel, said Doerksen.

“Boosted by a growing propensity for Chinese to travel abroad, increased Chinese in Canada and greater access to Canadian visa centres in China, we expect demand for air travel between Canada and China to continue to grow. During the last visit of the Chinese Premier to Canada in Sept. 2016, the two countries announced an official joint goal to double two-way travel by 2025.

“Clearly, there has been a significant increase in travel between China/Hong Kong and Canada,” Doerksen told Wings. “In fact, it is the second-biggest incoming market (excluding the U.S.) after the U.K.”

Moving markets
So, what does this all mean for Air Canada? In recent quarters, Air Canada management specifically cited more competitive capacity on trans-Pacific routes and China in particular as a driver for lower yields. While more capacity will pressure yields in the short term, Doerksen believes Air Canada is well positioned to compete and grow over the long term.

In the second quarter of 2017, on capacity growth of 13.5 per cent, record system passenger revenues of $3.517 billion increased $374 million or 11.9 per cent from the second quarter of 2016. The increase in system passenger revenues was driven by traffic growth of 13.6 per cent. Yield improvements were recorded in all markets with the exception of the Pacific market.

“With its geographically well-positioned hubs in Vancouver and Toronto, strong North American network that facilitates connecting traffic, favourable slot times in key cities in China, and partnerships with Cathay Pacific and eventually Air China, we see Air Canada as well positioned to successfully compete in this important market,” Doerksen said. “We also note that the number of flights per week between Canada and China is dictated by a bilateral treaty between the two countries. The details of the agreement are confidential, but we understand that Chinese carriers are closer to their cap on weekly flights than Air Canada. As such, further growth in competitive capacity beyond what has already been announced would appear to be limited.”

WestJet announced on June 1 that it has applied to Transport Canada (TC) for the designation to fly non-stop between Canada and China using its own aircraft. Under bilateral aviation agreements, TC has the authority to designate carriers to operate services between two countries. An application for designation is the first step in a detailed regulatory process that ultimately involves working closely with regulatory agencies in both nations before service can commence. When appropriate, WestJet said it will announce specific cities and routes.

“China is a logical step in our international expansion,” WestJet spokesperson Lauren Stewart said. “It is the world’s largest tourist source market and our federal government is committed to doubling the number of visits to Canada from China within the next four years. With our existing fleet of 767s and our previously announced order for up to 20 new Boeing 787-9 Dreamliners, WestJet is uniquely positioned to take advantage of this rapidly growing market for air service.”

If approved, service won’t likely begin before 2019 when the airline starts taking delivery of the Dreamliners, Doerksen said. But since China is close to its cap of seats allowed, there could be an opportunity for WestJet to get in on the action. The unknown is available slots at major airports such as Beijing, Shanghai and Hong Kong, which may force WestJet to look at secondary airports, although Beijing is scheduled to open a new international airport in 2019. On the plus side, WestJet has codeshare partners in China, which could help them get slots.

All this to say, the Canada-China market is getting crowded with new capacity from existing and new players. Some examples:

Despite its impressive growth of weekly departures, does Air Canada plan to add additional departures, particularly from cities other than Vancouver, Toronto and Montreal?

“We believe China will continue to be one of the most important aviation markets in the years to come,” said Rocky Lo, Air Canada’s director of business development for Asia. “We launched daily Montreal to Shanghai non-stop flights this past February and we currently have no plans for additional departures. However, we are constantly looking for opportunities to grow our China network.”

Asked how Air Canada markets the route to differentiate itself from the competition and what is the airline’s advantage, Lo offered this answer. “With service to 57 airports in the United States, Air Canada has the biggest North American network offering more flights that any other carrier. Together with our Star Alliance partners, Air China and Shenzhen Airlines, and partner Juneyao Airlines, we provide customers with a multitude of conveniences when connecting onwards such as thru-ticketing, thru-check-in, baggage transfers and frequent flyer program reciprocation.

“We operate one of the most modern fleets in the world and our aircraft to China feature three cabins of service, all offering comfortable ergonomic seating and enhanced definition intuitive touch personal entertainment screens thus meeting the needs of both business and leisure travellers.

“We offer concierge service to our top tier customers frequent travelers as well as all customers who are booked in International Business class. As the only international network carrier in North America to receive a Four-Star ranking according to independent U.K. research firm Skytrax, which also named Air Canada the 2017 Best Airline in North America, Air Canada is the carrier of choice.”

Does Air Canada expect to attract business from the U.S. to fly via Canada and if so, how is it promoting it?

“We continue to promote our sixth freedom traffic connecting via our three gateways, namely Vancouver, Toronto and Montreal. Customers arriving from the U.S. do not have to go through Canadian customs or claim their luggage. As we offer U.S. preclearance from these three airports, our customers clear U.S. custom in Canada, which makes the return connection seamless, convenient and efficient.

“Our flights to China are operated with our flagship aircraft, the Boeing 787 Dreamliner, with our industry-leading international product that offers unique comfort in all classes of service.”

Clearly, with so much to offer, the competition should be wary of our flagship carrier.