Features
The drive to power an industry

When NorOntair’s Dash 8-100 powered into the sky in December 1984, it marked one of the most important events in Canadian aviation history. Not only did the fledgling airline, a subsidiary of the provincial government’s Ontario Northland Transportation Commission, provide essential passenger service connecting the dots in remote Ontario locations, but it also debuted the PW100, one of the crowning jewels of Longueuil, Que.-based engine manufacturer Pratt & Whitney Canada (P&WC). 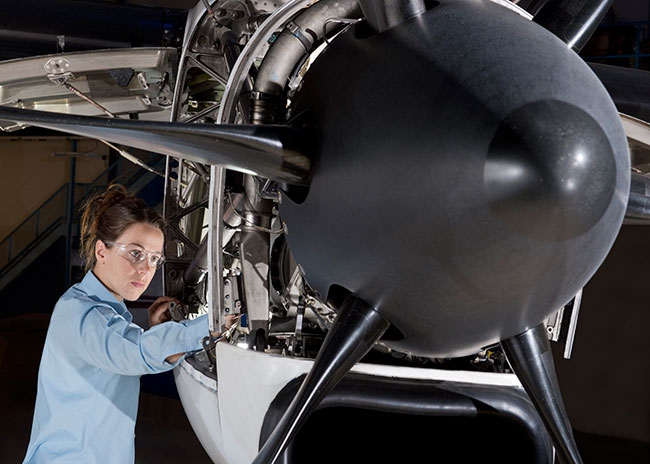 P&WC celebrated three decades of PW100 excellence in December 2014. Here an AME works on the PW119 engine. When NorOntair’s Dash 8-100 powered into the sky in December 1984

A few months after NorOntair’s successful first flight, PW100 engines were powering the ATR42 for French and Italian turboprop regional airline Aerei da Trasporto Regionale and the Embraer EMB-120 for Brasilia of Brazil. The regional turboprop airline as we know it was born, and today, this cost-effective model has been adopted by airlines from coast-to-coast and around
the world.

It’s a model also used by Canadian airlines flying reliable Dash-8s and Bombardier Q400s such as Porter Airlines, Air Canada Jazz and WestJet’s Encore. And fuelling it all is an ironclad relationship between Bombardier and P&WC, two iconic Canadian aerospace companies working together to drive aerospace here and abroad, now and into the future.

“The PW100 is a tremendous achievement,” says Porter Airlines president and CEO Robert Deluce. “It takes Porter anywhere we want it to go and it really is a great piece of technology. It was founded with speed, convenience and service in mind, and the PW150A (one of the derivatives of the original engine, now on the Q400) has excelled in each of these areas.”

Bombardier president and CEO Mike Arcamone agrees saying his company’s excellent relationship with P&WC in the development of the turboprop model continues today. “The relationship we have had with P&WC has allowed us to look into markets together that we thought we never could,” Arcamone said. “The reputation of the engine is sound and because of the partnership we have, it allows us to readily respond to consumer demand.”

The PW100 engine is a great Canadian aerospace success story that illustrates just what happens when you blend ingenuity, teamwork, and creativity with good old-fashioned hard work. It’s an engine that defines the pioneering spirit illustrated by Canadian aviation and aerospace companies on the global stage – creating reliable, dependable products that exceed expectations for customers worldwide.

A logical progression
P&WC launched the PW100 family to extend its turboprop power range offering from its then current 1,000 shaft horsepower (shp) at the end of the of PT6A family. The engine has since grown from 1,800 shp to more than 5,000 shp, incorporating the latest advanced technologies on an ongoing basis to meet changing market conditions and customer needs. In addition to airline use, the engine series has demonstrated a diverse and varied range for a number of operations including aerial firefighting (Bombardier’s CL-415 water bomber), amphibious aircraft and military transport airport aircraft including the Airbus C295, a competitor for the Canadian Fixed Wing Search and Rescue program (FWSAR).

With 38 PW100 model types developed since the 1980s and some 8,000 engines producing more than 155 million hours of flight time since its inception, the PW100 engine is easily one of the most impressive and successful aerospace products ever built.

“The one thing about P&WC is we have been able to develop engines that people want,” president and CEO John Saabas said at the 2014 National Business Aviation Association tradeshow. “And that’s what’s interesting about Pratt Canada. There have been many points in time that we came up with engines that nobody expected us to come up with.”

Exceeding expectations and creating products that meet – and exceed – customers’ demands is a description that aptly fits the PW100 family of engines. And if there’s one person who has developed an intimate knowledge of the PW100 program, it has to be Richard Dussault, P&WC’s Vice President of Marketing.

Dussault has been involved with the PW100 project since its first flight. He was an application engineer during the program’s inception and was put in charge of helping ATR install the engine. He has since joined other P&WC employees in designing a product that has stood the test of time – more than three decades of commitment, development, and refinement. So, it was hardly surprising Dussault was beaming when discussing the engine’s anniversary with Wings during a recent visit to the P&WC plant in Longueuil, Que.

“It’s pretty amazing when you think about it,” Dussualt said, recalling the people and their contributions to the project over the years. “The PW100 has helped transform the company. While we were serving some aspect of the regional commuter business – we had experience with the PT6 – this was the first time where we had a new class of airline customers in large numbers . . . and their prime business was built around the concept of on-time, efficiency, and availability. It pushed us to grow our own network of shops, find new partners and our designated facility network of partners.”

The growth of turboprop networks around the globe and the PW100 development also created P&WC’s first customer help desk and later transformed its customer first centre, Dussault said. There was also a lot of novelty in the company because P&WC had a successful product, but due to the maintenance demands of the engine, new infrastructures
were needed.

Turboprops deliver customer value because of their speed, efficiency, and cost-effectiveness. Environmentally conscious and durable in many environments, they are ideal for the Canadian market where connecting cities in a radius of up to 400 nautical miles from a larger hub is both quick and affordable to both consumers and airlines. Turboprop engines also have ideal propulsion efficiency, some 40 per cent more efficient than jets. With a speed range of 300 to 350 knots, however, short haul trips are best.

“It is a special feeling to be part of Canadian aviation on so many levels,” Dussault said. “The industry has morphed itself because the turboprop has created the ability for small communities in Canada and around the world to connect with hubs. And now that more and more people are flying, the world has become a much smaller place . . . The turboprop was at the beginning of all of this, the jets came in and filled a different need for longer-range travel.”
{gallery}11475{/gallery}
Turning back the clock
P&WC started its development of the PW100 engine in 1977. The PT6 was reaching a certain level, but a new product was needed.

“They are still going strong and the company is still developing new technologies for it,” Dussault said. “But the base architecture, at a certain point and time, you want to have more mass flow, you need larger compressors. So, we were looking at an engine that has 2,000 to 3,500 shaft horsepower, a bigger engine. That was also in the days of deregulation, so we were at the right place – a perfect good storm.

Deregulation happened in the U.S. in the early 1980s, and that opened the door to a lot of smaller, commuter-type operations. In those days, there were a few smaller jets but not that many and there were not that many turboprops. The PT6 had quite a few Beech 19s, mostly 19-seat and 14-type machines, so we were successful in that market but not to the size and speed and velocity that we were able to get when the first PW100 hit the market.”

Pratt also had the advantage of a very strong marketing campaign, which helped them win contracts with Embraer, ATR, and in (prior to becoming Bombardier) De Havilland Canada, the Dash 8 family. All three PW100 engines were developed back-to-back, Dussault said, and the first two, the 120s that power the ATR and the Dash 8, were certified in December 1983.

“That’s why we celebrate the 30th anniversary of the first certification. The first Dash 8 entered service 30 years ago in December. In January 1985, the first ATR entered service and then Embraer. So, from that point on, the market just took off. Many smaller airlines were born.”

The PW124 and PW127 are all derivatives of the main engine design. It’s a three-shaft engine as opposed to the PT6, which is a two-shaft machine, so the PW100 created more power. As Dussault noted, the PW100 team changed the front compressor and the turbine that goes with it puts more capability into it. These models are also a bit bigger engine of the PW100, but the core of the engine, the HP spool, remains largely the same with all the models.

“We also had smaller derivatives that match – on a Dash 8, we were able to put a 124 turbo machine with a 120-style gearbox to make it 123,” Dussault said. “The 119 on a Dornier machine was again a mix of different gear boxes and turbo machines. So, now, there are 38 models since the beginning of the engine.”

P&WC is busy looking into the future for the Next Generation Regional Turboprop – a 90-seat version that will boast greater passenger comfort and destination options. Such an aircraft, Dussault said, would have a power plant in the 5,000- to 7,000-horsepower range to power it on longer haul trips.

“We have done a lot of testing on our Next Generation Regional Turboprop which would be a 5,000- to 7,000-shaft-horsepower engine class, about 20 per cent more fuel efficient than our current 100 series,” he said. “We have run the compressor and done all the first phase of testing and will continue to do the testing into early next year. Essentially after that, we continue to dialogue with airframers and those making advanced design studies to find out what they need. We’re going to do a lot more work as there is time to study what is needed.”

Dussault laughs when asked if he has a better memory of the milestones of the PW100 family of engines than he does of his children’s own developmental milestones, but it isn’t exactly a farfetched question. Like other members of the PW100 team, he has brought the same kind of passion and dedication to this product as one would to his or her family environment. But this is a family, and he points out that there are many others like him at P&WC who have given their heart and soul to the program, illustrating just how passionate the team is about product development and its role in Canadian and global aviation and aerospace

“We have so many people who have been dedicated to the success of this program,” he said. “And that’s the commitment and determination to exceed customer demands and create outstanding products that helps drive innovation at P&WC.”

December 2014 marked the 30th anniversary of:
The Dash8-100 was the first PW100-powered aircraft to enter service in December 1984 with the regional airline NorOntair.