Features Operations
The Eclipse 500 : Closing in on Target

The story behind its remarkable journey. 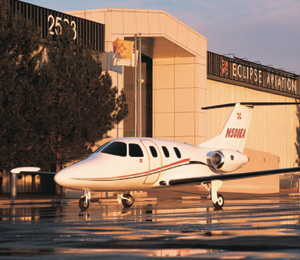 When Vern Raburn, president and CEO of Eclipse Aviation Corp. in
Albuquerque, New Mexico announced he would build a twin-engine light
jet for under US$1 million and sell 1,000 per year, people scoffed. Was
he a modern version of the flamboyant Jim Bede who flogged two-seaters
and tiny jets to the little guy for chump change? Didn’t he know that
of every 100 people who start a new aircraft firm, only two survive?
Why, Raburn hadn’t even worked in the aviation industry! Industry
veterans, perhaps forgetting the successes of the late Bill Lear (of
Learjet fame) were no kinder: “How can he do something we couldn’t?”

Today,
seven years later, Eclipse has raised more than US$398 million and
received an astounding 2,300 orders, almost certainly a record for a
start-up company with a new jet. Eclipse has also recruited over 400
people, flown four test aircraft and is likely to certify its plane by
next spring. It’s likely to be the first very light jet certified. VLJs
are loosely defined as jets under 10,000 pounds, typically flown by a
single pilot, carrying up to six people and costing under US$3 million.

Raburn
was president of Microsoft’s consumer products division and later
executive VP of Lotus Development when Lotus 1-2-3 was launched. In
these and other executive positions, he flew a Beechcraft Duke,
Mitsubishi Diamond and a Cessna CJ1 to engagements. With over 6,500
hours and about 15 type ratings, he loved aviation but detested the
high costs of ownership and operation. During his 25 years in
information technology he was accustomed to rapid change and an
emphasis on the future – the very opposite of the outlook in general
aviation. If costs could be decreased using the lessons of information
technology, many more people – both pilots and passengers – could
afford to fly.

He envisioned a small, lowcost jet; meanwhile Dr.
Sam Williams of engine-maker Williams International was developing a
small turbofan engine. Burt Rutan was recruited to design a proof-of
concept machine, the ugly Williams V-Jet II, sometimes called the
Pronto, although that was the code name later given to the project.

The
objective was a five passenger twin -jet with a cruising speed of 375
knots, a low stalling speed and a range with four occupants of 1,280
nautical miles. (Buyers have been guaranteed those figures, plus or
minus 2.5-5%.) Other targets were a useful load of 1,250 pounds and a
maximum altitude of 41,000 feet. Dr. Oliver Masefield, father of the
highly successful Pilatus PC-12, has been in charge of engineering. He
enlarged the V-Jet, replaced its composite construction and V-tail with
metal and a conventional Ttail. He changed a dowdy bird into an
attractive one that was easier to make. A straight (i.e., unswept) wing
was chosen to assure docile flight characteristics. The remarkable
67-knot stalling speed will make transitioning light plane pilots feel
at home while improving safety. Auto throttles are standard, a first in
such a light aircraft.

Other objectives included improved
reliability, lower initial and maintenance costs and increased safety.
The airframe is designed for 2,000 hours a year, and to match airlines’
dispatch reliability. The 46 avionics boxes in a typical jet were
reduced to 22. Avio, a major innovation not to be confused with the
Italian jet engine maker, integrates all aircraft systems – avionics,
engine controls, fuel management, pressurization. Previously only
advanced military aircraft and commercial jetliners had such equipment
that reduces pilot workload and increases reliability.

Dramatic
changes – the kind the general aviation industry avoids like red ink –
were needed to meet the target and selling price. Computer
numerically-controlled milling is used to make complex parts from
aluminum billets. Friction stir welding (FST), developed at Cambridge
University, eliminates 60% of rivets and also saves weight. It uses a
rotating tool that presses so hard on a lap joint that the two pieces
are welded without the metal liquefying. Although FST hadn’t been used
in aircraft, the FAA approved it. Modular assembly and just-intime
parts management cut costs further.

The program suffered a near
disaster when the new 770-lb. thrust Williams fanjet was found
inadequate. The more expensive 900-lb. thrust Pratt & Whitney
Canada PW610F was chosen as a replacement, but not without much
agonizing, demolished schedules and a $100,000 price increase. A lesser
firm would have collapsed.

Eclipse’s management knew that the
plane’s future depended on its safety record and the willingness of
insurers to cover single-pilot operations. Cirrus Design can testify
about the impact of a flurry of crashes. Even before those, insurance
companies have been unenthusiastic about covering solo pilots in Cessna
310s, never mind high-flying million-dollar jets doing 375 knots. To
underwriters, a general aviation pilot and a jet sounded as unappealing
as castor oil with strychnine.

Type-rating training is included
in the price of an Eclipse. Pilots must have a private licence and
multiengine and instrument ratings. A self-paced program covers jet
engines, high-altitude physiology, aerodynamics, flight planning,
weather and radar. During a one-day evaluation on United Airlines’
Boeing 737 simulator, pilots will be approved for the type rating
course or recommended to take additional training. Buyers who fail to
meet safety standards of the course will have their money refunded.
Training will be done by United, and may also be supplemented by
high-altitude and upset training in a Czech Aero Vodochody L-39 twoseat
jet. Graduates with limited experience may be required to fly with a
mentor. Because of this training, insuring an Eclipse should cost less
than a Piper Meridian, according to one consultant. Canadian buyers
have ordered 12 Eclipse 500s, making Canada the firm’s third largest
market after the US and UK. The first Canadian aircraft should be
delivered by spring 2007, if FAA certification is completed as
scheduled by next March 31.

Transport Canada requires owners of
all passengercarrying jet aircraft to have an operating certificate.
The audit and associated consulting costs about $5,000. Some Americans
fear this requirement will hamper sales, but Richard Gage, president
and CEO of the Canadian Business Aviation Association, disagrees. (The
CBAA issues the certificates and administers the program that Transport
Canada mandates.) “The program helps operators identify hazards and
demonstrates that risks are capably managed.”

All Canadian sales
have been to owner-operators. In the US, two-thirds of sales have been
to air taxis and the remainder to private owners. Consumers will have
more choices and the many underutilized airports will benefit, Raburn
believes. DayJet Corp. alone accounts for 309 of the announced 2,300
orders. DayJet plans to sell seats on demand on a sharedride basis, a
fresh idea that may not work in Canada because of our lower population
density. With Eclipse’s direct operating costs just 81 US cents per
mile, fares should be just over economy class rates.

Corporate
sales have been modest. “Corporations are conservative. They want to
see a type certificate, touch and feel before they buy,” one sales rep
told me. When the Eclipse has a track record, its low costs should
encourage firms to use them for ferrying middle-level staff.

It’s
unheard of for a previously unknown firm to sell so many aircraft
before certification. The more usual start-up goes through several
phases: optimistic publicity, failed deadlines, hunts for new financing
and too often, failure. At least two competitors have failed, probably
because they underestimated certification costs and/or their product
was too similar to others.

Today, a new Eclipse buyer could not
take delivery before March 2008. High demand has already encouraged
speculative purchases. That, and the outstanding support from air taxi
firms, suggest Eclipse has created a new category of aircraft, as
Canadair (now Bombardier) did with its Regional Jet. Meanwhile,
consultants’ estimates of the VLJ market range from hundreds to over
10,000. The first 160 Eclipses each sold for a remarkable US$995,000.
Today’s price is US$1,295,000 in 2000 dollars, estimated to be
US$1,480,000 by certification time. That’s less than many used
turboprops. The competitive Cessna Mustang is to be certified in fall
2006. It lists for US$2,600,000 while the SOCATA TBM-700 turboprop goes
for US$2,690,000.

Lured by the prospect of thousands of sales,
VLJ makers are as numerous as the first snowmobile builders. Eclipse
and Cessna are nearest to certification, but the Adam A700, a twin-boom
Burt Rutan design developed from the A500 piston twin, is likely to be
the third. Other serious contenders are the singleengine Diamond D-Jet,
Honda Jet, and Embraer VLJ. The Avocet ProJet, Eviation Advantage,
Excel Sport-Jet and Maverick are less impressive competitors. Would-be
top guns may prefer the twoseat F-18-like ATG Javelin. Some VLJ buyers
may not be able to get insurance because insurers are insisting on
training in a Class D simulator, which are unlikely to exist for less
popular light jets. Eclipse’s record is impressive, but the challenges
of large-scale production and flight safety remain. Everyone who wants
to encourage innovation and fresh ideas in aviation should pray that it
will be successful. The company won’t say whether its next project, to
be announced in 2006, will be larger or smaller than the Eclipse 500.
The five passenger interior.