A survival tool for aircraft operators 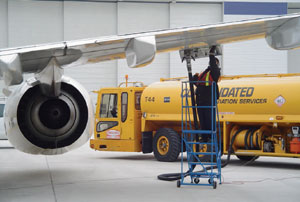 Two years ago, the cost of a barrel of oil was less than US$25. Since
September 2003, jet fuel and aviation gasoline prices have more than
doubled, and aircraft operators around the world have felt the effects.
According to an April 6, 2005 Globe and Mail report, Air Canada spent
$142 million more on jet fuel in 2004 than in 2003, and WestJet lost
$4.9 million in net revenue for each US$1 increase in the price of a
barrel of oil.

THE SOUTHWEST EXCEPTION
The
major airlines are not the only aircraft operators that have been
negatively affected by fuel price increases over the past 12 or more
months. Regional airlines, charter aircraft operators, corporate flight
departments, flying schools, specialty air services and recreational
pilots have also been squeezed financially.

While many air
carriers have been struggling due to record-high fuel prices, one major
US airline has not: Southwest Airlines. The discount air carrier has
been profitable for the past 31 years, and 2004 was no exception. Last
year, Southwest Airlines made a net profit of US$313 million, a
remarkable achievement considering that the price of jet fuel increased
66% during the year.

How was Southwest Airlines able to make a
handsome profit while other American air carriers had record losses?
While relatively low operating expenses and attractive fares were major
factors, so was fuel hedging. In a recent interview, Southwest CEO Gary
Kelly said: “Our profits would evaporate without our fuel hedge.” For
2004, Southwest Airlines hedged about 80% of its fuel, which saved the
company US$350 million.

Kelly introduced large scale fuel
hedging at Southwest Airlines a few years ago when he was CFO, and his
foresight saved the air carrier US$521 million in 2003 and 2004. Most
of the other American airlines hedged either at a low level (25% or
less) or not at all, and collectively they lost US$10 billion last
year. On this side of the border, one Canadian air carrier has paid
$7.5 million more for jet fuel this year because management did not
implement hedging when oil was US$45 per barrel. Inaction can be very
costly.

What is fuel hedging? Also known as fuel price risk
management, fuel hedging is the practice of using investments in the
commodities markets to lock in or cap the price paid for fuel. The
effect is similar to buying insurance in that fuel hedging provides
aircraft operators with protection against major fuel price swings.
Trading can also be done to increase the value of an operator’s account
during periods of declining oil prices. Fuel hedging allows companies
to keep air fares, charter fees, and air freight charges comparatively
low. For aircraft operators on fixed budgets, it means that flight
hours do not have to be reduced to meet budget.

What financial
investments are used in fuel hedging? Futures, options, swaps and
differential contracts. While there is not enough space in this article
to explain each type of contract and how they are used to hedge fuel,
information about them is available on investment Web sites. Using
options and swaps, Southwest Airlines has locked in a jet fuel price
for the remainder of this year that is equivalent to US$26 per barrel
of oil, and US$32 per barrel for 2006. The airline has fuel hedging in
place to 2009. Longer-term hedging is available to Canadian aircraft
operators with a good credit rating and adequate funds.

How much
does it cost to participate in fuel hedging? Different hedging
strategies carry different costs, and aircraft operators can hedge as
little or as much of their fuel usage as they want. Typically, the cost
to hedge is a small fraction of an operator’s fuel expense over a given
period. There are low-cost hedging trades that involve payment only for
a broker’s commissions. Because fuel hedging involves investing,
financial risk is an inherent part of it. However, the risk is offset
by the value protected. There are hedging strategies that can be used
to substantially reduce and even eliminate the investment risk. As with
flying, the risk can be effectively managed by someone with the right
skills and experience.

Is fuel hedging available to any aircraft
operator? Yes, although hedging programs vary from operator to
operator. For example, a hedging program for a commuter airline would
be different than for a corporate flight department or a flight school.
Generally, the larger the aircraft fleet (and fuel usage), the more
sophisticated the fuel hedging strategies used. Aviation fuel price
risk management is available to Canadian aircraft operators of any size
through professionally managed programs.

Who is authorized to do
fuel hedging trades? With the exception of swaps, to buy and sell the
derivatives contracts used to hedge fuel, an aircraft operator must
open and fund an account with a licensed commodities broker. For swaps,
an operator can use a financial institution or a broker with the
appropriate authorization. Using the services of a specialist with
hedging experience in the energy markets and familiarity with aviation
is highly recommended. Due to the stringent education, training, work
experience, and licensing requirements, few investment professionals in
Canada are authorized to conduct fuel hedging on behalf of aviation
clients.

What does the future hold for oil (and aviation fuels)
price-wise? On July 20, US Federal Reserve Chairman Alan Greenspan said
that fuel prices are likely to keep rising for years. The increasing
energy demands of China and India, and continued unrest in the Middle
East, are major contributing factors to the increase. While there will
be temporary price declines, energy market fundamentals point to an
upward price trend until significantly more oil is found, extracted and
refined. According to petroleum industry experts, an additional US$100+
billion needs to be invested in oil exploration and infrastructure
projects to meet future energy requirements.

Oil supplies 40% of
the world’s energy and 96% of the world’s transportation. In the next
20 years, the number of cars on the planet is forecast to increase by
550 million units, doubling the demand for gasoline. India’s energy
needs are growing at more than 7% annually, and during the past three
years China’s demand has increased 65% (the country now uses nearly
one-seventh of the world’s total energy). According to Boeing, by 2023
China will quadruple its jet aircraft fleet, making it the second
largest in the world.

Fuel hedging gives aircraft operators an
excellent way to protect themselves financially against the effects of
increasing global demand for oil. The days of relatively inexpensive
aviation fuel are over. A professionally managed fuel hedging program
can help aircraft operators of any size reduce the financial impact of
rising fuel costs and control their fuel bill. Considered unnecessary
by many operators in the past, fuel hedging has become a survival tool.