The first Jenny, or Canuck as it was called here, was produced in Toronto by Canadian Airplanes Ltd. 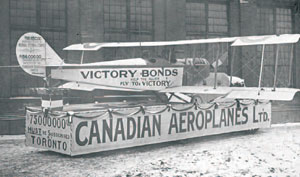 The word ‘Canuck’ in the Canadian aviation world is normally associated
with the CF-100, the first fighter aircraft designed in Canada; it will
therefore come as a surprise to some Canadians that the honour really
goes to the Curtiss Jenny, a plane that was built under licence in
Canada during World War I and which trained 2,500 military pilots for
service in Europe.

The
Jenny owes its fame in Canada to the beginnings of military aviation in
this country. In 1914 Canadians wishing to fly had to join the Royal
Flying Corps in Great Britain and be trained in that country. The
demand for pilots became so great, however, that the British started to
look to Canada, among other places, for replacements.

In 1917 an
extensive training program was set up in this country, for the most
part from the ground up. The most suitable aircraft available was to be
found in the US, the already famous Curtiss Jenny; a contract was
rapidly signed with that company to licence and build the plane in
Canada. The first Jenny, or Canuck as it was called here, was produced
in Toronto by Canadian Airplanes Ltd. Over the next two years, some
1,200 Canucks were built to train the pilots who were then sent on to
England for combat operations.

Although a goodly number of
aircraft were lost in training accidents, the Canuck was considered a
relatively pleasant airplane to fly. However, training pilots was
considered by some instructors to be at the same level of danger as
combat flying. Thus was the groundwork laid for such future training
programs as the Britiish Commonwealth Air Training Plan during World
War II and the similar NATO program in the 1950s.

Nor did use of
the Canuck remain restricted to training embryonic pilots in this
country. Some of the 1,200 aircraft plus parts built here were shipped
back to the US to help its air force with its own military programs.

After
the war many of the Canucks were made available for a variety of
peacetime purposes and as such were used for barnstorming as well as
becoming the first aircraft in Canada to carry out aerial surveys.
Above all, the Canuck put substance to the expression ‘air mail.’

It
was only fitting that on November 10, 1980 Canada Post issued a 35-cent
stamp picturing the Canuck in this service. A fitting tribute to a
versatile airplane!