Features Operations
The Good Old Days: Air travel may have been for the elite but it was at least simple.

The Good Old Days: Air travel may have been for the elite but it was at least simple. 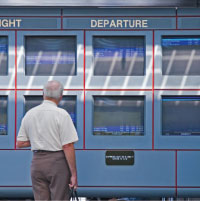 This was discovered while thumbing through a volume of well over 1,200 pages purchased at an antiquarian bookshop in Sacramento several years ago. The publication’s title, exactly as described on the front cover, was: “The Official Guide of the Railways and Steam Navigation Lines of the United States Porto Rico Canada Mexico and Cuba Also Time-Tables of Railroads in Central America.” Then, as an afterthought following a long dash: “Air-line Schedules.”

The date of this issue was September 1961.

Airline schedules occupied only a piffling 50 pages of this volume, but the jet age had already begun with DC-8s and B707/720s edging out the DC-6, DC-7, Constellation and the early turboprop Electra and Britannia. Train timetables still took up 881 pages, but this was down from the 1,150 pages they took up in the June 1947 issue of the Official Guide. (Today’s Amtrak timetable is about 130 pages.)

The fare quotations at the top of this column were taken from the entry for Canadian Pacific Airlines, which in those heavily regulated days was allowed exactly one transcontinental flight each way daily (Montreal-Toronto-Winnipeg-Vancouver). Price comparisons between now and nearly half a century ago are always eye-catching, but what was striking here was not so much their level as their simplicity. There was one flat fare for Economy Class and one for First Class – take it or leave it – and the difference between the two was no more than 50%.

Today, with deregulation, computerization and “yield management,” airline fares are all over the map. They are too confusing to be printed in a timetable, if indeed airlines still printed timetables at all. The process has led to air travel becoming a mass market, and the resulting free-for-all has changed the world.

It has also created endless anomalies, and every traveller has his own list from personal experience.

For example, in a Vancouver hotel last year I got into breakfast conversation with a couple at the next table. They had just returned from an Alaska cruise and were about to fly home to Minneapolis. But their flight was part of the cruise deal, and the cruise line had a contract with American Airlines. So they had to fly by way of Dallas, for a total travel time of seven hours and 20 minutes. If not encumbered by that contract, they could have flown non-stop on Northwest Airlines in three hours and 38 minutes!

Also in Vancouver last year, I was staying at the airport hotel one morning when the need arose to head for Seattle earlier than I had planned. (I had originally intended to take that evening’s Amtrak train at a cost of $36.55). I checked out and trundled my bags downstairs, first to the Horizon and then to the Air Canada counter. It would cost me more than $300 in total for that short hop across the border! I protested to Horizon that I was booked on one of its flights from Seattle to Edmonton the following week – a much longer trip – for only $116.20. But I was told, in effect, that I had to pay through the nose for late booking – even though there were empty seats on the plane that were bound to remain unfilled.

So I walked across the street, rented a car and drove to Seattle. National Car got my revenue, the airlines didn’t.

Later last year, I was flying on Continental Airlines from Houston to New Orleans. The flight was overbooked, and the airline asked for volunteers to allow themselves to be bumped to a later flight. I volunteered, and for my minimal inconvenience I was rewarded with a US$300 credit toward a future Continental flight. Not a bad deal!

A week later, I decided to head home a day earlier than planned. My New Orleans-Houston flight was non-refundable, but for a $25 fee Continental allowed me to book onto an alternative flight within three hours of departure if a seat was available. This was done. Again, not a bad deal. But when I tried to rebook my Air Canada flight from Houston to Calgary, I was told that the change would cost me more than $900 – on top of an original total roundtrip fare of $529.52! Again, the late-booking problem.

So I spent an unplanned (but interesting) day in Houston.