No aircraft previously existed that could be used in the Canadian North. 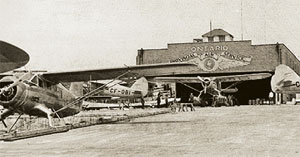 A look at some of the aircraft used by the RCAF at the beginning of
World War II immediately brings to mind a single adjective to describe
its appearance. The Noorduyn Norseman must surely be categorized as
rugged.

And
rugged it was! The designer, Robert Noorduyn, concluded that no
aircraft existed that could be used in the Canadian north and withstand
the rigourous use to which it would be subjected. In 1934 he decided to
set about creating such an aircraft, the Norseman, and must accordingly
be given an A+ grade for his efforts.

The prototype made its
first flight in 1935. Not for him the open cockpit of the military
training aircraft at the time. The Norseman was equipped with an
enclosed and heated cockpit, had room for eight passengers, and extra
freight could be stowed underneath the cabin floor.

Later in the
same year the Norseman went into production with the first model, the
Mark II, having a 450-hp Wright engine. Two years later this powerplant
was replaced by a 600-hp Pratt & Whitney. After production was
completed by the Noorduyn company, production of the newer model, the
Mark 5, was switched to Canadian Car & Foundry in what is now
Thunder Bay.

By the time World War II broke out the RCAF took an
instant interest and ordered it into production as a light utility
transport. In 1942 the US Army mirrored the RCAF. The Americans ordered
yet a more modern version and in far greater numbers than the RCAF (759
to 69).

Production, therefore, did not cease at the end of the
war as was the case with purely military aircraft. There was a
continued demand for the plane, not only in North America but in other
areas as well. Production continued until over 900 were manufactured.