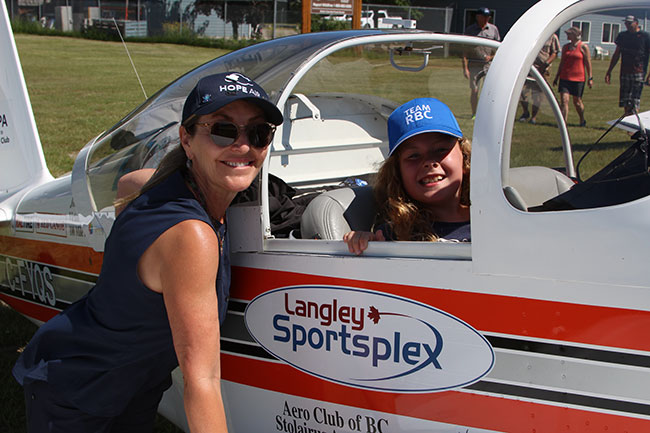 Pilot Lise Ash shares her passion for aviation at a community event in Quesnel, BC, during Hope Air’s 2019 campaign to raise funds for 1,000 medical flights.

Helping others while flying airplanes – has there ever been a more perfect combination? In June of this year, six pilots set off from Pitt Meadows Airport in British Columbia on an expedition through the Northwest that would help raise a quarter of a million dollars in support of Canadian charity Hope Air. Founded in 1986, Hope Air is an organization that provides transportation for Canadians living in rural communities, who otherwise would not be able to afford flights to attend their medical appointments. It is easy to forget how vast our country is, stretching 5,500 kilometres (km) from the Atlantic to the Pacific Ocean. With nearly 10 million square kilometres of landmass and 37 million people, it’s no surprise that a significant portion of the Canadian population lives in rural communities. Although health care is provided to all Canadians, it can become excessively difficult to manage day-to-day living expenses on top of regular flights in order to receive medical care.

In 2018, pilot Dave McElroy organized the Give Hope Wings, America’s Expedition campaign, and successfully fundraised half a million dollars for Hope Air. This first expedition travelled over 32,000 km, landing at 50 airports in 20 different countries over eight weeks. Only a few short months after McElroy returned home, a fateful meeting with, Langley-based pilot Lise Ash forged what would be the beginning of the Northwest Expedition. Ash had attended one of his talks, where McElroy discussed his journey and support of Hope Air. She wanted to be involved and asked when he was planning the next expedition. The Give Hope Wings, Northwest Expedition, would travel 17,500 km (6,450 nautical miles) and land at 35 airports. Beginning in British Columbia, flying through the Yukon, Northwest Territories and then westward to circumnavigate Alaska.

The journey was divided into three legs. A formation flight of three aircraft would travel the first leg together and two aircraft would then continue on from Fairbanks for the remainder of the journey. For the first leg, Ash and McElroy flew in his RV6; Steve Drinkwater and Alexis Thind piloted Drinkwater’s Piper Cherokee; and Ian Porter and myself flew his Pipistrel Virus.

A couple of months before departure, an anonymous donor contributed $50,000 in honour of two female pilots, early in their careers, to join the expedition. Annamarie van der Meijden and I were lucky enough to be selected as the recipients of the Give Hope Wings Women Who Fly Award. I joined the crew for the first leg of the journey from Pitt Meadows to Fairbanks, Alaska and van der Meijden joined us in Fairbanks to continue on the journey.

The objective of the expedition was clear: spreading awareness and raising money for Hope Air. The pilots who took part in this charitable expedition donated so much of their time, aircraft, experience and helped Give Hope Wings reach its fundraising target.

The Pitt Meadows Aero Club hosted a breakfast for the Give Hope Wings crew before we embarked on an adventure of a lifetime. Some of the pilots had an opportunity to talk about their story and why the expedition was important to them. Every person had a story that was moving and emphasized the importance of supporting initiatives like this one. Yes – it’s an exhilarating feeling to fly over remote mountainous landscapes, but this endeavor was about so much more than that. I’ll never forget that day, flying over the coastal mountains that hug Pitt Meadows Airport, their peaks imprinted in my mind forever. Something in me had changed, I realized that following your dreams and passions was only worth while if you shared it with others, and on this particular journey I would get the opportunity to do just that. I would share this journey with those around me, but most importantly with the hundreds of people who rely on Hope Air to give them and their loved ones the care they so desperately needed.

After departing Pitt Meadows Airfield, the three-plane formation stopped at Quesnel, Prince George and Fort St. John for community events, where we were able to meet individuals who had used the services provided by Hope Air. These are towns that have been heavily impacted by the organization’s work. Meeting families who relied so heavily on this service was impactful, and only made us wonder how many more people will benefit from Hope Air’s flights. In talking with the patients, we learned about the struggles of reaching Vancouver from the heart of British Columbia’s interior. When visiting Fort St. John, I learned that the drive from Prince George to Vancouver could take 14 hours. For many patients seeking care, this car or bus ride through winding mountainous roads is so physically draining that the journey is not something they can even consider. I understood the hardships that went along with driving long distances to receive medical care, but hearing it firsthand gave me a different perspective. The tone in their voices changed and as they looked over at the Rocky Mountains. It broke my heart to see how these beautiful rock formations I had coveted my whole life can actually be a massive obstacle to people living in the interior.

Our first couple days of travel were beautiful. We were blessed with blue skies and were able to show the aircraft to the locals who came out in support of Give Hope Wings. A funny aside, our arrival into Prince George went a little differently than planned. We landed right on the numbers before realizing that we would have to taxi to the very end of a 11,500-foot runway. Unfortunately, our friends behind us had to orbit several times before being cleared to land, causing one of the pilots to feel a little unwell after an already turbulent afternoon.

There are a few things I learned while on this expedition through the north, including: 1. Bug spray is an essential tool in your survival kit, 2. Eat whenever you can and pack lots of snacks, and 3. Bring a spare tire. When we arrived at Watson Lake we noticed a flat tire on the Pipistrel when fueling up. With no maintenance available at the field, a local pilot operating a charter offered us a patch repair kit, which was just enough to get us to Yellowknife. In Yellowknife, we tried to find a replacement tube but had no luck, so we continued on our journey, hoping it would hold. Lucky for us it held through some very remote airports and when we arrived in Inuvik we were able to get it repaired properly.

The power went out in the city of Yellowknife, as we sat down for dinner. Laughter erupted as everyone fumbled for their phones and the waiters quickly tried to find tea-lights. We talked over dimly lit candles about the flight from Watson Lake, and discussed our next stop. Little did we know that tomorrow’s flight to Fairbanks would be the most challenging on our journey. Thick smoke enveloped the city from fires in the south while rain and low visibility conditions were coming in from the west. The decision was made to divert to Rae Lakes airfield, which made us all a little uneasy about our fuel consumption. A difficult decision had to be made as to whether we continued on or turned back. The conditions in Yellowknife were worsening and there was no guarantee we could get back in. Our options were limited: Do we continue on and hope the weather improved or stay put. We decided on the former, and the faster RV6 lead the formation flight northward and guided us through. We were all very excited to land in Norman Wells with nothing but blue skies ahead of us.

With every mile that we travelled farther north, the days became longer. Crossing the 60th parallel into the Arctic Circle was a pretty momentous occasion. I couldn’t help but think about how lucky I was to be flying over such incredible landscapes and, most of all, how beautiful our country is. When we arrived in Inuvik we were welcomed by Mayor Natasha Kulikowski, who presented us with a certificate of passage North of 60 degrees. It’s probably my most favourite souvenir from the trip. Inuvik is such a cool town to visit, sipping the local brew of Yukon Gold at 8:00 pm in the evening with the sun still high over our heads as if it were mid-day was an incredible experience. I only wish we had more time there. When we left Inuvik in the morning, we crossed over the Mackenzie Delta and made our way to Shallow Bay where a local source informed us that they had seen hundreds of Beluga whales over the last couple of days. As we drew closer, we hugged the shoreline and descended lower in hopes of spotting the white mammals in the thick brown waters of the bay. It didn’t take long for us to spot them, as their white heads poked out like the white caps of waves on the ocean. The Pipistrel radioed to the two other aircraft and soon enough three airplanes were circling overhead dozens of beluga whales. What a thrill to see wildlife in its natural habitat. I couldn’t help but look over at Ian and repeat once again, “I could die happy here”.

The Northwest Expedition was a great success and reached its goal of providing 1,000 flights to patients who require medical care far from home. The two expeditions combined (America’s expedition and Northwest Expedition) raised $750,000 for Hope Air. This will provide 3,000-plus flights to patients. I encourage you to look into Hope Air and contribute in any way possible. They have helped so many families in need, and I can’t thank them enough for this life-changing adventure.