Features Operations
Too Many Airlines? 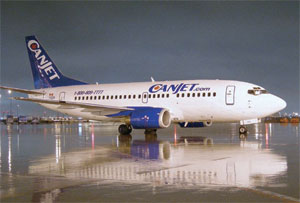 In September, Giovanni Bisignani, director general and chief executive
officer of the International Air Transport Association (IATA), told The
Globe and Mail that there are far too many airlines in the world. As if
on cue, Halifaxbased CanJet had already given advance warning it was
suspending scheduled service and grounding its ten leased Boeing 737
aircraft, with vague plans to regroup and enter the charter market.

The
CanJet shutdown was neater than the collapse of Jetsgo 18 months
earlier, and did not cause a similar disruptive ripple nationwide.
While Canada’s third-largest scheduled airline held a respectable 20%
market share in Atlantic Canada, that figure was diluted to less than
4% nationwide, and was likely to shrink further. In the last year,
CanJet had already started pulling in its horns, dropping
Toronto-Vancouver in November, and announcing the suspension of its
Toronto- Calgary service just days before its parent company, aerospace
conglomerate IMP Group, decided to wind down the operation. (By late
September, Ken Rowe, chair and CEO of IMP, had announced plans for the
charter operation. It will begin this winter with six Boeing 737-500
aircraft, combining its operation with Montreal-based executive charter
operator Execaire.)

To plug the gap west of Toronto, CanJet had
entered into a marketing pact with Vancouver-based Harmony Airways. The
agreement would help each carrier develop a national reach by feeding
traffic into the other’s limited route network, with Toronto’s Pearson
International Airport being the transfer point.

Such domestic
alliances are not unheard of in Canada, but neither are they common.
The agreement between CanJet and Harmony was especially interesting
given that at the time the two carriers were pursuing very different
business models, with the latter distinguishing itself with hot meals
and other amenities long tossed out of the economy cabin of
full-service carriers such as Air Canada on North American routes.

While
less messy than Jetsgo, the fallout from the CanJet shutdown has been
just as predictable with some fares in Atlantic Canada inching upward,
and both Air Canada and WestJet cautiously looking at adding capacity
in the region. No need, according to an IMP document that accuses both
carriers of already adding 10% more seats into the market.

Certainly
Air Canada is using the arrival of its Embraer 190s to flex greater
muscle along thinner routes. In April it launched the Newfoundland
Express, a once-weekly service from Fort McMurray, AB to Toronto with
same-plane service to St. John’s. This summer the airline increased the
service to daily. For now at least, WestJet appears wedded to its
single type strategy, meaning that any presence in smaller communities
that rival Air Canada can reach with an Embraer or Bombardier Regional
Jet is going to have to be realized through alliances with smaller
commuter airlines. How immediate this need is, however, is less clear.
Domestically, WestJet – which is celebrating its 10th anniversary this
year – is already larger than Canadian Airlines International was prior
to being absorbed by Air Canada.

Where perhaps WestJet’s need is
greater is in joining a global partnership to match Air Canada’s
founding membership along with United Airlines, Lufthansa and SAS in
Star Alliance, the world’s largest airline cooperative now serving 840
destinations in more than 150 countries.

WestJet has cobbled
together a few cooperative agreements with Asian carriers, but the lack
of presence in either of the two remaining airline alliances – SkyTeam,
which includes Continental, Delta, Air France and its KLM subsidiary,
or the smaller oneworld with American Airlines, British Airways and
Cathay Pacific – is reported to be a bit of a drag on filling seats,
especially with business travellers, a market segment WestJet is keen
to grow. WestJet’s load factor is 78.9%, versus Air Canada’s 81.7%.

As
predicted in Wings November 2005, WestJet has begun preliminary
discussions with oneworld, which has been minus one in Canada since
Canadian Airlines left the alliance in 2000. Oneworld is seen as a
comfortable fit for WestJet, where the airline shares space at
Pearson’s Terminal Three with the dominant carriers, American Airlines
and British Airways.

American Airlines has 12% of the
trans-border market, compared with Air Canada’s 35%. With 7% market
share on Canadian international scheduled services, British Airways is
a distant second to Air Canada’s 40%.

Whatever the outcome of
WestJet’s preliminary discussions with oneworld, the airline is not
expected to join any alliance before mid-2007, when a new reservations
system comes on line, enabling the carrier to interline. International
services continue to be Air Canada’s sweet spot, contributing 40% of
revenues (equal to market share). As the airline takes delivery of its
first Boeing 777 aircraft (four extended-range series 400s will be
delivered in 2007), the airline is considering expanding its service to
India with nonstop flights between Toronto and Mumbai. (Air Canada
already serves Delhi, and has had fifth-freedom rights to Mumbai
through Heathrow since 1993.)

One international service that Air
Canada has withdrawn from is Newfoundland. On Sept. 4 the airline
operated its last flight from St. John’s to London Heathrow, marking
the first time Newfoundland will be without year-round transatlantic
air service since entering Confederation in 1949. This move sparked a
disagreement between the airline and the St. John’s International
Airport Authority over whether the route was popular.

The answer
probably lies in just how quickly a new carrier will jump onto the
five-hour service. The airport authority claims it has worked with the
local business community and has short-listed two airlines – one
British – to operate the route, suggesting a travel-bank arrangement
identical to what was used to coax Delta Airlines to fly to Fredericton
from Boston. Local businesses and other organizations encourage a route
startup by setting up a travel bank to guarantee an airline a set
amount of money per year. The partners draw on that account to purchase
tickets.

An obstacle to international ambitions of all Canadian
airlines continues to be the glacial pace the federal government has
set in securing open-skies treaties. Canada recently inked a new
agreement with the UK, allowing both Canadian and British airlines to
pick up and transport passengers to third countries. Canada now has two
such agreements, compared with more than 70 that the US has negotiated,
although reaching a comprehensive agreement with the European Union,
which would add an estimated US$5 billion to the airline industry’s
bottom line, have stalled. Meanwhile, Canada’s recently negotiated
open-skies treaty with the US – which would allow airlines in both
countries to transport passengers to a third country – is also in a
holding pattern while the US Department of Transportation considers
whether an application by Air Canada that would open the door to a
closer cooperation and pricing with its Star Alliance partners,
especially United, on international services violates antitrust
legislation.

Antitrust notwithstanding, bilateral agreements are
increasingly out of sync with an industry where former state-run
airlines have been privatized, airports operate as independent
businesses, and access to markets such as Japan (the fastest-growing
source of travellers to Canada) remains restricted.

IATA’s
Bisignani points to the failure of governments to liberalize the air
transport sector as one of the causes for delaying a recovery of the
industry. IATA estimates that only 17% of air traffic operates in a
liberalized environment.

Heightened airport security and costly
service disruptions such as those that followed this summer’s alleged
plot to blow up 10 airliners en route to the US from London also
threaten the fragile recovery of the global airline industry. While
passenger volume has bounced back since 9/11, and high load factors
point to a remarkable resilience against future terrorist attacks,
security hassles and longer airport wait times are driving some
passengers to seek alternatives to air travel, particularly on
short-haul services. The Economist recently reported that in 2002,
approximately 16% of U.S. short-haul passengers switched to the
automobile as a result of longer airport baggage checks and other
security measures.

Similar statistics are not available for
Canada; nevertheless, this has to be good news for Robert Deluce,
president and CEO of this country’s latest scheduled startup, Porter
Airlines, whose business plan is to enable short-haul passengers to
side-step Toronto’s Pearson International Airport. With a fleet of 10
Bombardier Q400 turboprops, Deluce plans to fly to 17 Canadian and US
cities within a 920- kilometre radius from Toronto’s controversial but
more convenient City Centre Airport.

That’s not to suggest that
Deluce can expect an easy ride. Scheduled service out of the downtown
airport has been spotty to say the least – largely because Air Canada
is reluctant to operate out of the airport, but does not want anybody
else to. Porter was scheduled to begin 10-timesdaily service to Ottawa
in mid-October. Air Canada’s own plans to return to the airport have
been stalled by the Toronto Port Authority, itself under review by
Stephen Harper’s government. But few are betting that the City Centre
Airport can remain a one-airline shop for too long.

One segment
less likely to be affected by security delays is the leisure market,
where the pace is less hurried than business travel. It takes a lot to
knock the leisure market. According to Jean-Marc Eustache, president
and CEO of Air Transat parent Transat A.T., international tourism has
experienced virtually uninterrupted growth over the last 50 years, and
is expected to grow at an average rate of 4.5% over the next few years.

Air
Transat appears comfortable in its role as a leisure carrier, and has
so far avoided the lure of scheduled services that contributed to the
demise of Wardair, Nationair and, more recently, Canada 3000. Air
Transat’s parent, however, is considering the purchase of hotels, a
strategy that has been pursued by other airlines, especially in the
1980s, with mixed results.

One cost pressure that has eased
recently is fuel. The price of crude has tumbled 21% from a midsummer
peak of almost US$80 a barrel. Air Canada estimates that US$1 drop in
the price of a barrel of crude places an extra $28 million in its
pocket. Similarly, WestJet stands to gain an extra $5 million in
operating profit. Whether the price of crude will fall even further has
yet to be seen. Some oil industry experts suggest that demand is
already soaking up much of the surplus that has been driving prices
down.

Whatever the direction the price of oil takes, Air Canada
has already hedged to lock approximately one-quarter of its 2007
requirement at US$60 a barrel. WestJet does not have a similar hedging
strategy. It is unfortunate that lower fuel prices did not arrive in
time to rescue CanJet, which listed the high cost of filling its tanks
along with increased competition in Atlantic Canada and stiff airport
user fees as reasons for its demise.

Interestingly, the airline
industry has been largely silent of late over user fees, although like
the global industry itself, this is probably a fragile peace, set to
shatter following the next round of price increases. Transport Minister
Lawrence Cannon introduced a new Canada Airport Act last summer
intended to improve accountability of what Air Canada chairman Robert
Milton continues to decry as “true natural monopolies.”

The
government promises a more stringent fee-setting process, but has
failed to introduce regulatory price controls. How stringent remains to
be seen. The Greater Toronto Airports Authority, which rarely comes
across a price hike it doesn’t like, plans to dig a little deeper into
travellers’ pockets next January with a 33% increase in its passenger
user fee.

This alone will not force a rethink of the
legislation, but it does illustrate that the airport lobby remains
firmly in the left-hand seat.