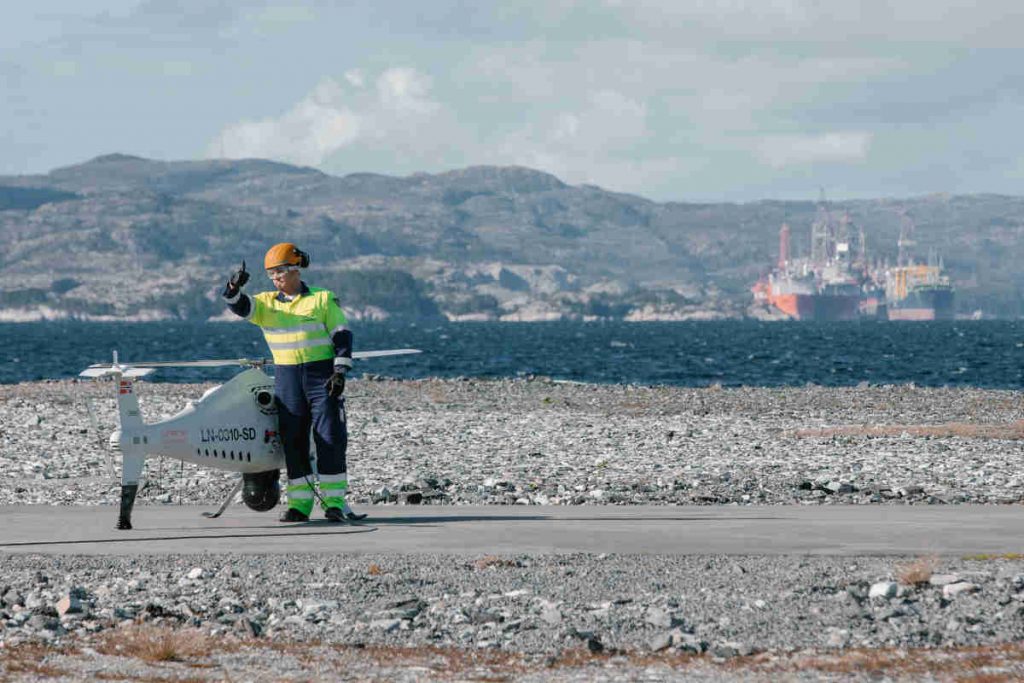 Kay Wackwitz, CEO and Founder of DRONEII, outlines 10 of the most important developments to take place in the global drone industry in 2020. Wackwitz, who established DRONEII as a drone market research consultancy after working for Lufthansa, notes, that despite a global pandemic hurting demand in most drone sectors, the year 2020 saw significant regulatory progress, improved products, refined services, and growth in public acceptance.

Wackwitz points to the effects of the coronavirus impact through DRONEII’s annual industry survey in mid-May, which indicated a drop-in-demand was more common with respondents (43%) than an increase (15%). Below, Wackwitz, in his own words, recaps the Top 10 developments from the drone industry in 2020.

1. U.S. Government Grounds Fleet of 800+ Drones Citing Use of Chinese Components
Started in 2017 and extremely controversial, drones from Chinese manufacturers were banned from government departments like the DoD for potential cyber vulnerabilities.

In January of this year, the U.S. Interior Department grounded its entire fleet of more than 800 drones based on the fact that most if not all of the drones contained Chinese-owned components.

To continue using drones, the DIU (Defense Innovation Unit) suggested five alternative manufacturers that fit the profile for government use. Whether the Chinese drone ban will be lifted completely or to a certain degree in 2021 under the incoming Biden administration is unknown at this point.

2. Drones Helped Fight the Coronavirus
Drones actively supported to curb the spread of the coronavirus. A very direct way was the use of spraying drones disinfecting highly populated places in cities. On top of that, drones were used to enforce quarantine/social distancing via inbuilt speakers.

In 2020, we saw flying kidneys, blood donations, tissue samples, and a lot of urgent medication – also delivered on the last mile. The technology proved capable, the regulators proved to be permissive and the citizens proved to be open-minded.

All this helped accelerate the global roll-out of drone delivery and will help facilitating game-changing logistics in the near future.

3. Record Funding for Drone Companies
Despite all the turbulences this year, the trust in the drone market continues to grow. Another record year in terms of Venture Capital investments and programs proofed that unmanned technology is making an impact and – most notably – is here to stay.

4. Strategic Acquisition of Altavian by FLIR Systems
The U.S. drone maker Altavian was acquired by thermal camera giant FLIR Systems (NASDAQ: FLIR) in December 2020 for an undisclosed amount. Altavian is one of the five drone manufacturers approved by the U.S. Department of Defense under the Blue sUAS program to sell to the U.S. military and federal agencies.

Now, with the acquisition of Altavian and in times of a ban on Chinese drone products, FLIR becomes a very powerful player with access to the US government.

5. The Most Intriguing Consumer Product for Indoor Surveillance
Drone surveillance is nothing new. However, it is new for consumers and it is very new indoors! Amazon subsidiary Ring – known for its connected house solutions, like video doorbells – announced in October that it will offer a flying indoor security drone in 2021.

Users will be able to program the system to make frequent checks or control it manually. It will have night vision for poor light conditions and will fully integrate with Ring’s existing security systems like door alarms.

The proof is in the pudding and we’re excited to see how this platform will perform under real-life conditions next year. In October this year, DJI, like other drone manufacturers, stepped up the development of payloads with the Zenmuse L1 sensor for its Matrice. (Photo: DJI)

6. Payload 2.0
Today, multi-sensor payloads are quite common to the commercial drone market (e.g. E/O+IR sensors) but combining a LiDAR scanner and an optical camera in a very small and very light payload is a remarkable step forward. In October this year, DJI presented the Zenmuse L1 sensor for their Matrice and Terra platform. It includes a Livox LiDAR module, a high-precision IMU, and a camera with a 1-inch CMOS on a three-axis stabilized gimbal.

The L1 forms solution that provides 3D data in real-time while capturing the details of complex structures. The miniaturization of technology seems endless, and it will bring us exciting new technology solutions – just like this one – in the years to come.

7. Disruption Squared
In September this year, a drone was used to transport a 3D-printed spare part to an off-shore oil rig in Norway. Equinor reported, that in a one-hour flight from Mongstad base to the Troll A platform in the North Sea, an additively manufactured spare part (a diesel nozzle holder) was delivered by a Camcopter S-100 drone this September.

What’s amazing about this incident? A spare part that is no longer manufactured was replicated, transported along a very dangerous shipping route, at a substantially small ecological footprint, and at a very high speed. This is a true game-changer not just in terms of provision and logistics but also for sustainability and speed.

8. Standards and Regulation were Improved for Better Compliance
In general, it can be said that most countries have established a solid regulatory framework for drones. However, interpreting and ensuring compliance with these rules is a challenge for companies using drones.

New standards representing an “applicable means of compliance” were introduced this year to help overcome these hurdles. Standardization bodies like ASTM, EUROCAE and ISO should be mentioned in this context, which published both technical and procedural standards.

The SESAR JARUS organization established a standard for the assessment of operational risks, which has also been integrated into the EU drone regulatory framework. Based on this standard, drone company DELAIR was the first European drone company to perform BVLOS flight under a “Predefined Risk Assessment” standard (PDRA).

9. Public-Private UTM Partnerships
UTM software companies have fought for their clients for many years now. The lack of drone space regulation was the main reasons that made it difficult for them to have market access. In 2020 however, many National Aviation Authorities (like the Australian CASA, US FAA, Poland ULC and Singapore CAAS) have partnered with private UTM companies to improve this situation.

A highlight in this context is Switzerland which has a very advanced solution for future UAM traffic management. Back in December 2018, the country launched the SUSI program (Swiss U-Space Implementation), a public-private partnership between Switzerland FOCA, the Swiss Air Navigation Provider Skyguide and a couple of other relevant market players/stakeholders.

A master agreement with all involved parties allowed to start a nation-wide implementation of an International Remote ID standard on September 21st of this year.

10. Light Shows and Fireworks using Drones
Like every year, this year will start and end with fireworks. The thirst for entertainment is high – especially in times of a pandemic and social restrictions. We saw a lot of activity in the drone show sector that offers a sustainable, quiet and creative alternative to fireworks.

Amongst many others, we saw 104 Drones touring with Celine Dion, a new Guinness Book world record with 3051 drones in China and salutes to frontline COVID-19 workers. Drone entertainment is clearly growing into a profitable business, so that leading drone manufacturers are increasingly focusing on this part of the drone business.