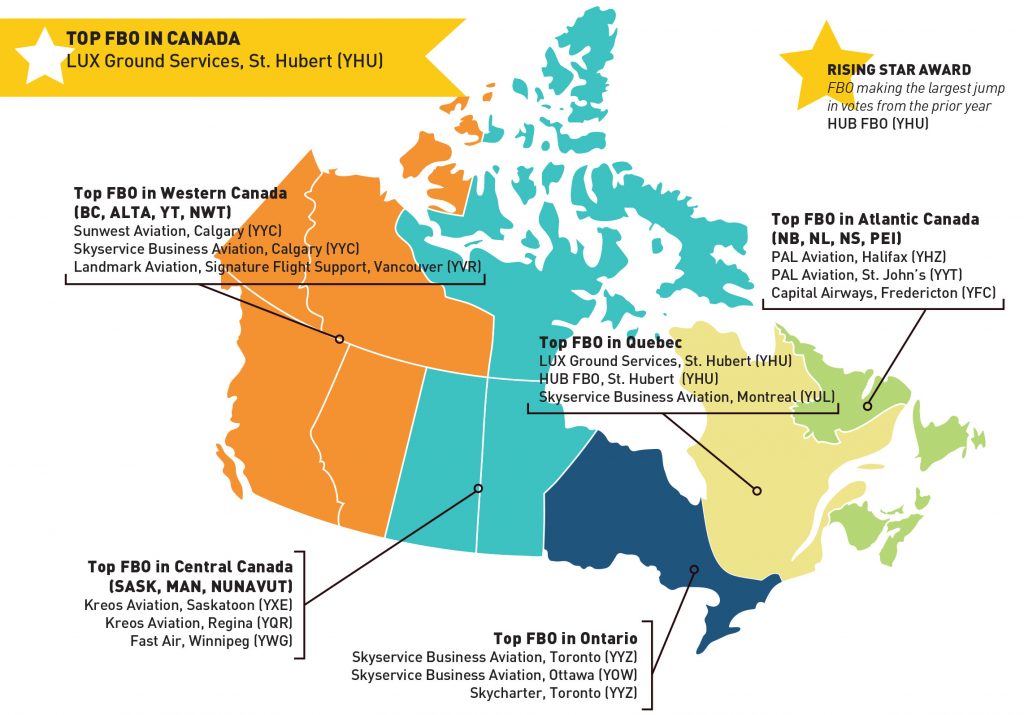 The 2021 Top Fixed Base Operators in Canada survey conducted by Wings received 459 responses in an open voting system through the months of April, May and June. This number of responses is down slightly from the 2020 survey with its 542 respondents, while the pre-pandemic 2019 survey edition had 1,845 participants. The 2020 and 2021 editions of the survey were, of course, heavily impacted by the implementation of strict government travel restrictions, at various times relating to both transborder and even domestic provincial flights.

With the 10-year-plus history of this survey, however, the number of respondents in 2021 provides material results to determine Canada’s Top Fixed Base Operator (FBO) in Canada in 2021, as well as the Top Three FBOs by region and the country’s Rising Star, recognizing one operation that received the highest number of votes, year over year, among all others. As with last year’s FBO survey, we asked participates a range of questions about operating in a pandemic environment and their near future plans to better understand the mindset of both customers and service providers. In addition to listing what they consider to be the best FBO in Canada, respondents were asked to rank eight factors in terms of what is most important to them in determining their favourite FBO.

The 2020 survey asked respondents to share their primary reason for flying and where they are flying to. Respondents were also asked if the Covid-19 pandemic would encourage them to fly more often via private or corporate aviation through FBOs.

LUX Ground Services of St. Hubert, Quebec (CYHU), this year received the most votes across all five Canadian regions to be named as Canada’s Top FBO, which marks the company’s first such honour. PAL Aviation previously was named as Canada’s Top FBO for two consecutive years, including its operations in Halifax, Nova Scotia (YHZ), in 2020, and St. John’s, Newfoundland (YYT), in 2019.

The 2021 Top FBO in Canada recognition for LUX at YHU highlights a well-executed rise for the young operation, which started up in late 2018. It also hints at the growth of Montréal Saint-Hubert Longueuil Airport, located just 16 kilometres east of downtown Montreal. Prior to the pandemic, as passenger numbers were climbing steadily at large international airports, the clear importance of close-by regional airports handling more air traffic drew significant investment.

With the support of parent company Chrono Aviation, itself a relatively young charter airline founded in 2012, LUX in three short years has made a major impact in one of the world’s largest aviation hubs. Chrono operates 737-200 flights from the LUX terminal in St. Hubert and the LUX team is now able to turn around a 737 within 60 minutes.

LUX began its operations at YHU with full ground and customs services, as well as fuel partnerships with both Avfuel and World Fuel. The LUX FBO network has now expanded to Quebec City, Mont-Joli and Trois-Rivières Airport. The St. Hubert location also just completed a 45,000-square-foot hangar expansion. LUX holds a commercial terminal at YHU, indicating its importance to the growing airport.

Francois-Luc Jutras, Director and General Manager of LUX, was responsible for opening and the beginning of all operations out of the private airport terminal. Coming from the banking world, with no prior aviation experience, Jutras has helped to steer the LUX operation from 15 people to more than 50 in this difficult operating environment. LUX is now looking at expanding its brand in three new cities in three different provinces. The company is also working with authorities to elevate YHU’s airport status, as it finalizes two deals with a regional carrier in Ontario and an ULCC. Jutras aims to turn LUX into the province’s most-active FBO in terms of aircraft movements.

The Wings 2021 survey recognizes the excellence of the Top Three FBOs across five regions. Moving from West to East, Sunwest Aviation (YYC) was named the Top FBO in the Western Region, followed by Skyservice Business Aviation at YYC and Landmark Aviation, Signature Flight Support, at YVR. Another relatively new FBO to have developed under the region’s energy boom, Sunwest won the survey’s Rising Star Award in 2019.

Skyservice Business Aviation in Toronto (YYZ) was named as the Top FBO in Ontario, and also placed third overall in terms of total votes among all others. In Ontario, Skyservice Ottawa (YOW) came second and Skycharter (YYZ) third.

With LUX placing first in all of Canada and earning the top spot in Quebec, HUB FBO, which is also based at YHU, came in second place in the province and Skyservice Montreal (YUL) came third.

PAL Aviation Services continued its FBO dominance of the Atlantic Region with its Halifax, YHZ, operation coming in first (and also second overall in Canada) followed by PAL St. John’s (YYT) in second and Capital Airways, based at New Brunswick’s Fredericton International Airport, YFC, in third.

This year’s Rising Star Award, again recognizing which FBO received the most votes year over year, goes to HUB FBO at YHU. Formally known as CYHU H-18 Services Inc., HUB FBO has more than 200,000 square feet of available space, including a 47,000-square-foot hangar with a 28-foot-high opening for aircraft. HUB FBO is situated just off of the 7,800-foot-long runway 24R at St. Hubert Airport.

When asked to rate what FBO services are most important, customer service was the number one consideration of survey respondents this year, followed by line service, facility, price, pilot amenities, hangars, and lastly if the FBO is part of a larger network.

The survey this year also aimed to find out more about the respondents themselves, to better understand the results, specifically asking what their role is when using FBO services, which included 33.0% of respondents indicating they were business executives, followed by 16.3% of the respondents being pilot/owners, 12.9% being crew members, and 11.8% being charter pilots. Single-digital percentage roles included, in order, AME, charter non-pilot (personal), government employee and aircraft owner non-pilot (whole or fractional).

When asked for what type of travel do you most often use an FBO, business/corporate was the overwhelmingly highest response at 65.0%, followed by personal at 25.8%, and government/professional services at 6.0%. This closely mirrors last year’s responses with business aviation at 64%, personal at 23%, and government/professional services at 10% in 2020.

Along the same lines, when asked how they use private/business/corporate aviation in terms of destinations, 70.5% of respondents this year indicated they flew for domestic travel, which certainly lines up with the restrictions placed on international travel. Transborder flights into the United States came second at 17.0% followed by international flights at 12.5% of all survey responses.

When asked if the coronavirus pandemic will influence your decision to use private aviation more in the future, even after the crisis subsides, 65.8% of respondents indicated yes, and 34.2% said no. Possibly because of fourth-wave challenges presented by the Delta variant, this year’s yes number at 65.8% is greater than the yes count of 61% of respondents in 2020’s survey, indicating they will fly more via private/corporate aviation – even as travel restrictions were starting to ease and vaccinations were increasing in later in the voting period. | W