Nov. 13, 2008, Toronto - The Toronto Aerospace Museum is honouring Canadian  aviation pioneer George Neal with a 90th birthday party at its facility at  Downsview Park in north Toronto on Saturday Nov. 22 between 2 p.m. and 6  p.m. 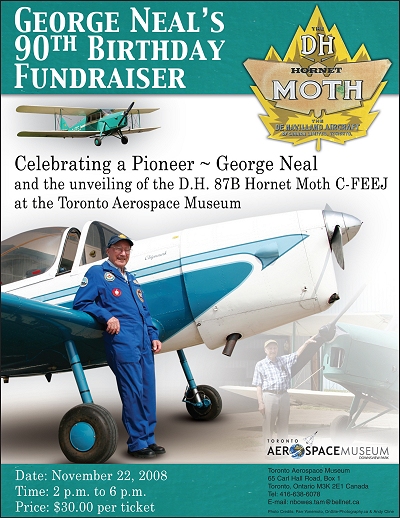 Nov. 13, 2008, Toronto – The Toronto Aerospace Museum is honouring Canadian
aviation pioneer George Neal with a 90th birthday party at its facility at
Downsview Park in north Toronto on Saturday Nov. 22 between 2 p.m. and 6
p.m.

At the birthday party, the Museum will unveil the latest addition to its
collection, a 1936 de Havilland D.H. 87B Hornet Moth biplane, C-FEEJ ,and
launch a fundraising campaign in Mr. Neal‚s honour to complete the purchase
of this rare aircraft.

"George Neal‚s career parallels the development of aviation in Toronto and
Canada over the last 75 years," said Wayne Barrett, Chair of the Toronto
Aerospace Museum. „We are pleased to honour him for his contribution to
Canadian aviation and the aircraft he helped develop when employed at the
historic de Havilland Canada aircraft factory which is now home for our
museum."

Mr. Neal is one of Canada‚s most distinguished test pilots. In 1995, he was
inducted into Canada‚s Aviation Hall of Fame, which recognized "his
contribution to the testing, development and promotion of Canadian designed
and built short take off and landing (STOL) aircraft has gained world-wide
recognition and respect for the Canadian aviation industry and all
Canadians."

At 89, Mr. Neal has been an active pilot for 71 years. On Nov. 1, 2008,
he flew the Toronto Aerospace Museum‚s newly acquired Hornet Moth to
Downsview.

George Neal Profile
Born on November 21, 1919, Mr. Neal grew up a farm just east of the airport
de Havilland Canada established in Downsview in 1929. A frequent visitor by
bicycle and horse, in 1936 the company hired Mr. Neal as a mechanic to
assemble wood and fabric aircraft imported from England.

Mr. Neal learned to fly at the Toronto Flying Club at Downsview in 1937.
During the Second World War, he served as a civilian flying instructor at
RCAF Air Observer Schools in Malton and Chatham.

In 1945, Mr. Neal rejoined de Havilland Canada as the comany launched
development of its first original Canadian aircraft designs. In 1948, he was
one of the first Canadians to be qualified on the RCAF's first jet fighter,
the de Havilland Vampire.

Mr. Neal's testing and demonstrations of these two aircraft and the famous
DHC-2 Beaver bush plane allowed them to be successful around the world. He
spent his entire test pilot career at de Havilland Canada, retiring in 1983
as Director of Flight Operations.

In 1992, de Havilland Canada was acquired by Bombardier Aerospace.

Since the early 1960s, Mr. Neal has restored several aircraft including a
Sopwith Pup and Hawker Hind for the Canada Aviation Museum in Ottawa.  Until
1991, he was also the national museum‚s Chief Pilot.

Hornet Moth Fundraiser
The year 2009 marks the Canadian Centennial of Flight, which began on
February 23, 1909 with the first powered aircraft flight in Canada by John
McCurdy, flying the Silver Dart at Baddeck, Nova Scotia.

Since 1998, the Toronto Aerospace Museum has been building an education and
cultural attraction at Downsview Park in the original aircraft factory
buildings de Havilland Canada established in 1929.

Recently, the museum, embarked on a campaign to acquire important aircraft
and aviation artifacts to ensure they are showcased for future generations
in Canada. To achieve these goals, the museum is seeking donations in Mr.
Neal‚s honour, via its web site www.torontoaerospacemuseum.com

The rare D.H. 87B Hornet Moth recently acquired is one of only three
believed to remain in North America. It is representative of the more than
250 „Moth‰ family aircraft sold in Canada in the 1930s.  The museum also
recent acquired a rare pilot ejection seat from the famous Avro CF-105
Arrow, Canada‚s first supersonic aircraft.

ABOUT THE TORONTO AEROSPACE MUSEUM:
The Toronto Aerospace Museum is an exciting educational, heritage and
tourist attraction located at 65 Carl Hall Road in Downsview Park, Toronto,
Ontario. Founded in 1997 the Museum displays a variety of aircraft and
aerospace technology within Canada's oldest aircraft factory.

The Museum‚s mission is to create a facility and resources for the education
of the local and aviation communities through the collection, preservation,
restoration and exhibition of information, artifacts and technology
associated with the aviation and aerospace history of the Greater Toronto
Area.  For further information on events, activities and Museum hours, call
416-638-6078, email tam@bellnet.ca  or visit www.torontoaerospacemuseum.com