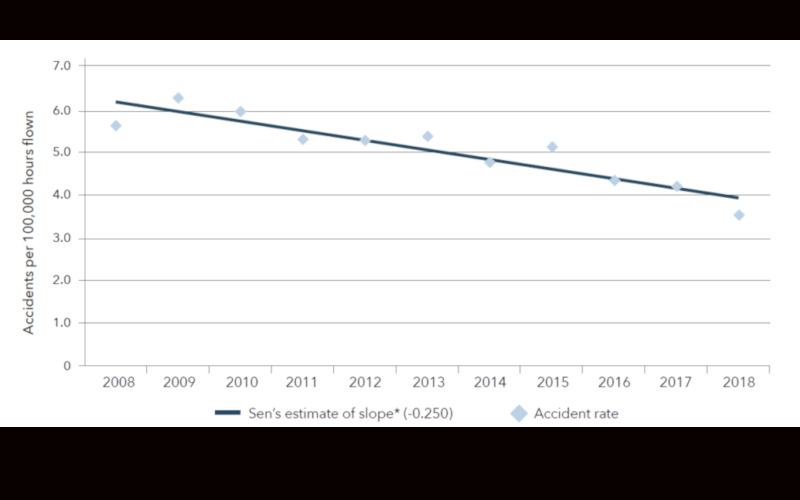 TSB’s annual report highlights that in 2018 the downward trend in aviation accidents continued, with regard to Canadian-registered aircraft, as it has over the last 10 years. (Source: Transport Canada statistics, using Sen’s estimate of slope via median, TSB 2018/2019 Annual Report)

The Transportation Safety Board of Canada on July 17 tabled its 2018/19 Annual Report, which outlines key annual statistics on occurrences in the aviation, marine, rail and pipeline modes of transportation. Across all modes, the agency launched 76 investigations and published 78 investigation reports in its 2018/19 fiscal year, ended March 31, 2019.

The number of investigations completed by the Transportation Safety Board (TSB) increased for a second year in a row; by 18 per cent in 2018/19 and by 81 per cent since 2016/17, largely because of its efforts over the past couple of years to streamline the investigation process. The TSB reports average completion time for certain classes of investigations was reduced by nearly three months for Class 2 investigations and by 43 days for Class 3 investigations. “Advancing safety is all about change, and change is about finding ways to be more efficient as well as effective,” said Kathy Fox, chair, TSB.

Since the introduction of what the agency refers to as Limited Scope Investigations (Class 4), 48 short reports were completed in less than eight months each, on average. In addition, the agency processed 188 confidential reports submitted through its SECURITAS program. At the end of the year, 177 SECURITAS files had been closed and 11 remained open for further follow-up.

In addition to its critical Watchlist, issued approximately every two years, and most recently in October 2018 (fifth edition), the TSB in 2018/2019 issued 63 new safety communications primarily to regulatory agencies and industry stakeholders. This includes 10 recommendations (seven as a result of aviation investigations); one board safety concern, 19 safety advisories and 33 safety information letters. In terms of aviation, the agency’s most recent Watchlist focuses on two key safety items, among seven total: Risk of collisions on runways and runway overruns.

Aviation accidents and incidents
The TSB’s annual report highlights that in 2018 the downward trend in aviation accidents continued, as it has over the last 10 years. During the 2018 calendar year, 201 accidents were reported to the TSB, which represents a 19 per cent reduction from 2017. It is also 25 per below the annual average of 267 accidents recorded from 2008 to 2017. 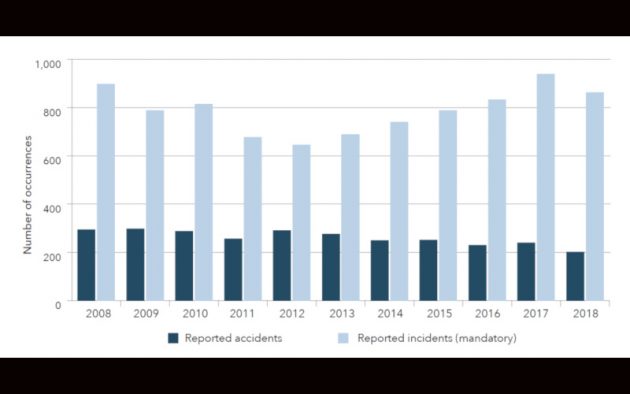 Among the 201 aviation accidents, 66 involved commercial aircraft, 134 private aircraft and two state aircraft, again over the 2018 calendar year, with 38 aviation fatalities. The 38 fatalities occurred from 23 accidents in 2018, which the TSB describes as considerably fewer than the annual averages of 55 fatalities and 32 fatal accidents recorded over the last decade.

Seven aviation accidents in 2018 involved a release of dangerous goods, which is similar to the eight such accidents in 2017 but higher than the yearly average recorded over the previous decade of about four per year.

There were 863 aviation incidents reported to the TSB over 2018, of which 611 were in Canada, 161 were outside Canada, and 91 involved foreign-registered aircraft. This represents a drop from the peak of 939 incidents reported in 2017, according to the TSB, but remains above the yearly average of 781 incidents observed between 2008 and 2017. The TSB explains the 161 incidents reported outside of Canada in 2018 is a high number in comparison to the corresponding average of 76 incidents per year during the previous 10 years.

The TSB continues to explain the accident rate for Canadian-registered aircraft (excluding ultralights) per 100,000 hours flown has followed a downward trend since 2008. These aircraft flew an estimated 4.8 million hours in Canada and abroad in 2018, according to the TSB report. With 169 accidents over that period, TSB states the accident rate is 3.5 accidents per 100,000 hours flown, below the 2017 rate of 4.2, and the 10-year average of 5.2 from 2008 to 2017.