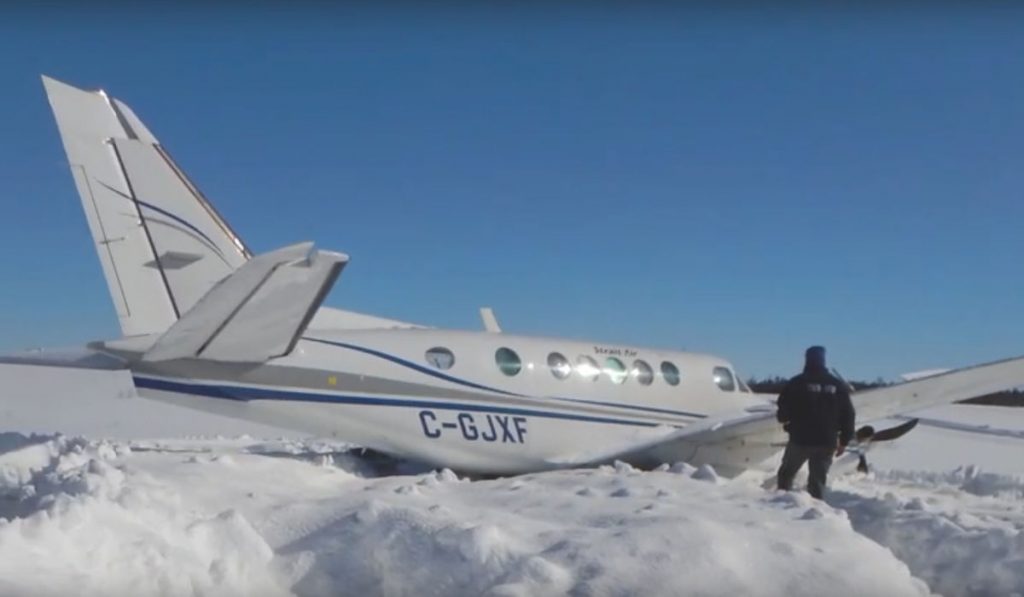 Transportation Safety Board of Canada (TSB) released its investigation report (A18Q0030) into the February 2018 runway overrun in Havre-Saint-Pierre, Quebec, which contains two safety recommendations and one safety concern. (Image: TSB/YouTube)

The Transportation Safety Board of Canada on May 21 released its investigation report (A18Q0030) into a runway overrun that occurred in Havre-Saint-Pierre, Quebec, in February 2018.

Among the issues identified by the Transportation Safety Board (TSB), the investigation found that the rules that govern instrument approaches in Canada are too complex, confusing and ineffective at preventing pilots from conducting approaches that are not allowed, or banned, because they are below the minimum weather limits.

As a result of the investigation (described in detail via a YouTube video and a written statement, both presented below), TSB is making two recommendations to address these issues. First, that Transport Canada review and simplify operating minima for approaches and landings at Canadian aerodromes and, second, that Transport Canada introduce a mechanism to stop approaches and landings that are actually banned.

TSB also issued one safety concern based on its investigation, described in detail below by the transportation watchdog in its May 21 statement:

On 26 February 2018, a Beechcraft King Air A100 operated by Strait Air (2000) Ltd. was conducting charter flight NUK107 under instrument flight rules, from the Sept-Îles Airport, Quebec, to the Havre St-Pierre Airport, Quebec, with two crew members and six passengers on board. Prior to departure, the weather at Havre St-Pierre aerodrome indicated a visibility of 3/4 of a statute mile in light snow. Although below the one mile of visibility published on the approach chart, visibility was at the minimum limit permitted for this flight. Enroute, the crew received the updated weather, which indicated that the visibility had deteriorated to just 1/4 mile in heavy snow — well below the minimum visibility allowed to conduct the approach.

However, the pilot believed he could continue the approach safely. When the pilot saw a small patch of runway, he continued the landing, touching down just 700 feet before the end of the runway. Without enough runway to slow down, the aircraft overran the end and came to a stop in a large snowbank approximately 220 feet beyond the end of the runway. The aircraft sustained substantial damage, and four of the occupants received minor injuries.

Elsewhere in the world, aerodromes use the published visibility as the minimum limit, to determine if an approach is authorized. If the reported visibility is lower than what is published, air traffic control (ATC) will not let an aircraft carry out the approach. In Canada, flight crews are permitted to conduct approaches in visibility conditions that are below what is published. Transport Canada (TC) regulations applicable to approach limits are complex and contain many exceptions that can be misinterpreted. Flight crews have to consult multiple reference documents and consider a variety of factors to determine if an approach is allowed. The current rules also make it difficult for ATC to determine whether an approach is authorized. As a result, ATC will clear an aircraft for an approach regardless of the published minima, leaving the ultimate decision to conduct the approach to the flight crew.

This investigation found that, based on the pilot’s interpretation of the various factors and exceptions relating to the approach ban, he incorrectly believed that he was allowed to conduct the approach. As well, the approach ban did not prevent the pilot from conducting the approach in weather conditions that were below the minimum limits.

Finally, the investigation found issues with a number of the company’s Standard Operating Procedures (SOPs) including the pre-flight inspection and planning for the approach. In this occurrence, a deviation from SOPs at a critical moment of the flight was a key factor that contributed to the runway overrun. Therefore, the Board is concerned that, if TC does not provide the necessary oversight of flight operations by assessing the effectiveness of crew resource management, threat-and-error management, decision-making, and SOPs, these procedures may not be effective, increasing the risk of an accident, particularly an approach-and-landing accident.

Runway overruns is a key safety issue on the 2018 Watchlist, and has been on the TSB Watchlist since 2010.