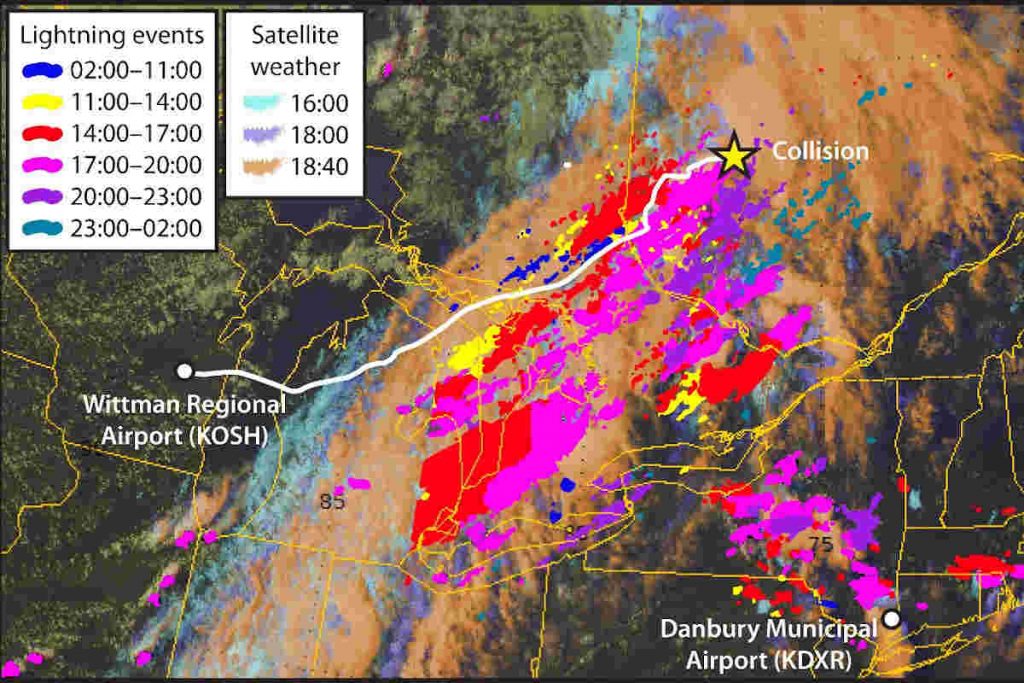 Flight path of the Beechcraft from TSB investigation A19Q0128 superimposed on multispectral visible satellite images of the weather around the time of the event, on July 29, 2019. Lightning strikes in the past 24 hours are indicated by a colour code. The location of departure (KOSH), the intended destination (KDXR), and the location of the collision with the terrain are also indicated. (Source: Environment and Climate Change Canada, TSB)

The Transportation Safety Board of Canada on December 10, 2020, released investigation report A19Q0128 about a July 2019 fatal collision with terrain, stating the accident highlights the risks of continued visual flight rules flights in adverse weather conditions.

TSB explains its investigation determined that flying in a degraded visual environment likely led to the pilot experiencing spatial disorientation and the aircraft subsequently colliding with terrain. (Full final report.)

Detailing the event, TSB explains, that on July 29 2019 at 15:55 Eastern Daylight Time, a Beechcraft Bonanza V35B aircraft registered in the U.S. departed Wittman Regional Airport, Wisconsin, U.S., for a daytime visual flight rules (VFR) flight to Danbury Municipal Airport, Connecticut, U.S., with only the pilot on board.

Shortly after takeoff, TSB explains the aircraft began to deviate north of the planned route and subsequently flew into Canadian airspace. At 19:12, while in the vicinity of a line of rain showers, thunderstorms and lightning, TSB explains the aircraft entered a right turn, descended rapidly and collided with terrain approximately seven nautical miles northeast of Senneterre, Quebec. 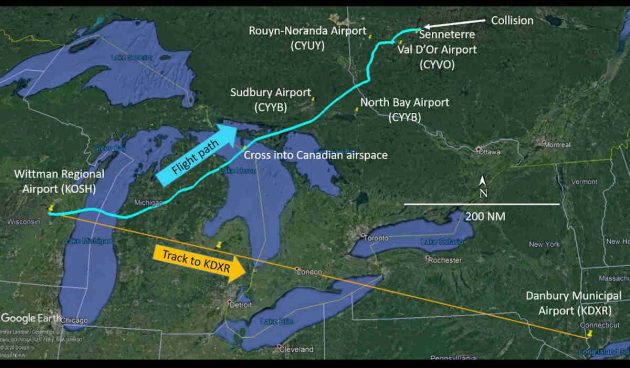 At 23:31, the Joint Rescue Coordination Centre (JRCC) in Trenton, Ontario, was notified of a missing aircraft and initiated search and rescue operations. The accident site was found four days later, on August 2 2019. The pilot was fatally injured and the aircraft was destroyed. There was no post-impact fire and no signal was detected from the aircraft’s emergency locator transmitter.

The flight profile and weather data suggest, according to TSB, that the pilot deviated more than 350 nautical miles north from his intended flight path in an attempt to bypass or outrun a moving line of thunderstorms and lightning. Numerous heading deviations and corrections all proved unsuccessful, according to TSB, in either crossing the line of weather or regaining a suitable track toward the original destination.

TSB states the commitment to the original plan indicates that the pilot’s decision making was likely affected by plan continuation bias, which led him to continue a VFR flight in adverse weather conditions. TSB concludes the final flight path also suggests that the pilot likely experienced spatial disorientation from a visual or vestibular illusion and, as a result, the aircraft entered a spiral dive and collided with terrain.

TSB notes the investigation also highlights that if pilots do not have recent experience flying in instrument meteorological conditions, they may not possess the skills and proficiency required to do so, increasing the risk of loss of control and accident.

It was also determined, through TSB’s investigation, that the knowledge level of ADS-B, including space-based ADS-B, was limited within the search and rescue (SAR) community. At the time of the occurrence, JRCC Trenton was aware that ADS-B technology had been available in Canada since March 2019, but also that not all aircraft operating in Canada were equipped with this technology. As a result, JRCC did not include ADS-B data in its data requests to NAV CANADA.

As such, TSB states if SAR authorities do not access or use data from emerging technologies, such as space-based automatic dependent surveillance – broadcast, in a timely manner, there is a risk that following an accident, potentially life-saving search and rescue services will be delayed. In this particular case, however, TSB notes the accident was not survivable. TSB continues to explains, that eventually, access to spaced-based ADS-B data helped in reducing the search area, locating the downed aircraft, and allowed the TSB to reconstruct the flight path.

Since this accident, TSB notes the Department of National Defence SAR stakeholders were made aware of an ADS-B aircraft locating emergency response tracking service and the requirement to specifically request ADS-B data. Coordinators now routinely include such queries, according to TSB, when investigating overdue or missing aircraft.