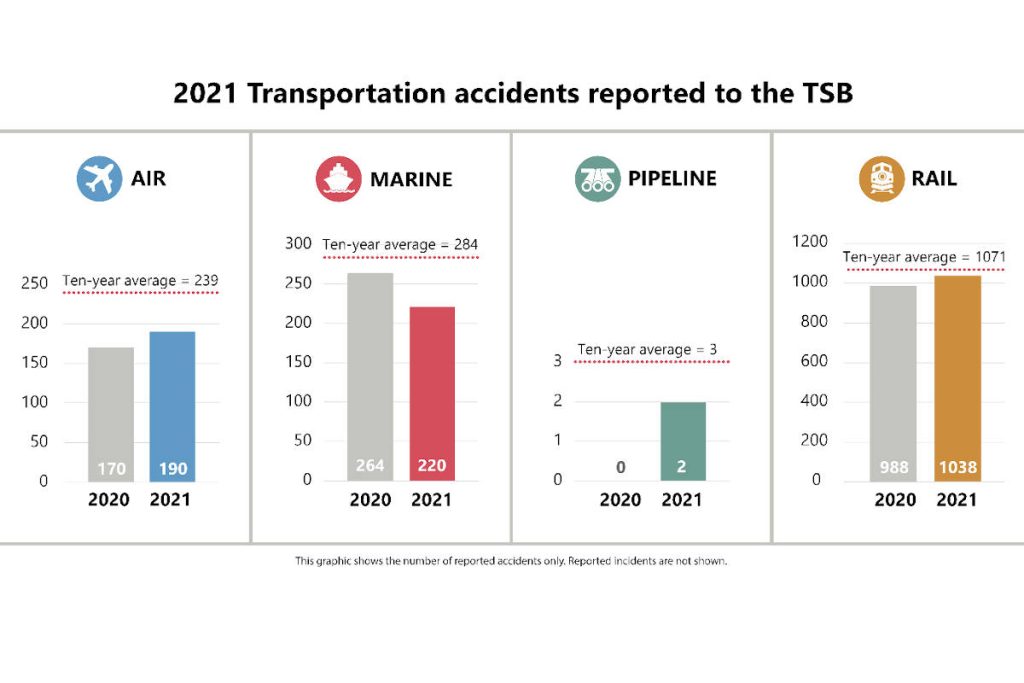 The Transportation Safety Board of Canada on June 17 released its 2021 final annual statistical summaries on transportation occurrences in the air, marine, pipeline, and rail transportation sectors. The report builds upon a preliminary release published in February 2022.

The TSB notes how the air transportation in Canada continued to be affected by the pandemic during the first half of 2021. During the second half of the year, as vaccination rates increased and travel restrictions began to ease in both Canada and abroad, TSB explains total aircraft movements resumed to 73.2 per cent of pre-pandemic levels.

In 2021, a total of 190 air transportation accidents were reported to the TSB. This number is 12 per cent higher than the previous year’s total of 170 accidents but 21 per cent below the yearly average of 239 accidents reported in the prior 10 years, 2011 to 2020. TSB notes most of the accidents in 2021, 183 of them, took place in Canada and involved Canadian-registered aircraft.

In 2021, 1,038 rail accidents were reported to the TSB, an increase from the 2020 total of 988, but a three per cent decrease from the previous 10-year average of 1,071. Freight trains accounted for 38 per cent of all trains involved in rail accidents in 2021, according to the TSB, with four percent (42 in total) were passenger trains, with the remaining 58 per cent comprising mainly single cars/cuts of cars, locomotives, and track units. Rail fatalities totaled 60 in 2021, unchanged from 2020 but below the previous 10-year average of 71.