Following the release of its investigation report (A15F0165), the Transportation Safety Board of Canada is reminding aircraft passengers to comply with flight and cabin crew instructions and to wear their seat belts after 21 people were injured during a turbulence event encountered by Air Canada flight ACA088 in December 2015.


February 21, 2017  By Transportation Safety Board of Canada 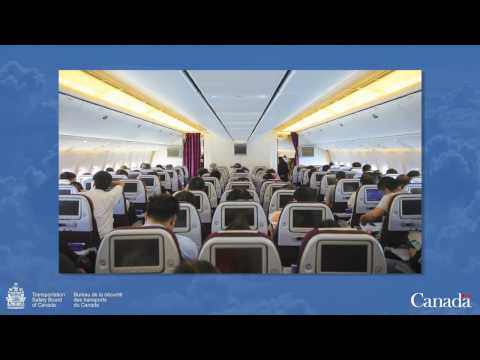 On December 30 2015, a Boeing 777, operating as flight ACA088, departed Shanghai, China at 1123, travelling toward Toronto. The flight was planned for 13 hours and 40 minutes. About five hours into the flight, the flight crew received a meteorological information bulletin that forecasted an area of severe turbulence over the southern coastal mountains of Alaska. Approximately two and a half hours later, 35 minutes before entering the area of known turbulence, the first officer directed that the inflight service be stopped and that the cabin be secured. Seat belt signs were turned on, and several announcements were made in English, French and Mandarin, stating that the flight was approaching an area of turbulence and asking the passengers to fasten their seat belts. Despite these measures, many passengers were not wearing their seat belts when the flight encountered severe turbulence.

During the turbulence encounter, 21 passengers were injured, one of whom sustained a serious injury. Once the turbulence subsided, first aid was provided on board the aircraft, as the flight diverted to Calgary. This short video describes the occurrence and depicts, in a generic aircraft, what effects the forces associated with severe turbulence would have on passengers who are not wearing seat belts. The investigation found that the flight crew’s decision to secure the cabin and reduce to turbulence penetration speed contributed to preventing significant numbers of injuries in the cabin and potential damage to the aircraft.

The investigation also determined that the flight crew were last exposed to information on jet streams (fast-flowing air currents) and turbulence in training taken in 2011 and 2012. Air Canada dispatchers had also received training on clear air turbulence weather and jet streams. However, training material given to both pilots and dispatchers did not contain information on the increased likelihood of turbulence through a wide range of altitudes when jet streams cross mountainous terrain. If training material does not contain complete information pertaining to all of the factors that contribute to turbulence, then there is a risk that the best course of action will not be taken.